The Samsung empire at 80

SEOUL -- Eight decades ago, there was little indication that a fruit wholesaler in Daegu, an industrial city in southeastern South Korea, would one day become a sprawling business empire with operations spanning electronics, shipbuilding, insurance, medicine and more.

Lee Byung-chull set up Samsung Commercial Co. -- the forerunner of today's Samsung C&T -- in 1938, when he was 28. The company started out exporting fruit and dried fish to Manchuria and China.

After the Korean War, Lee expanded into sugar-making, launching CheilJedang in 1953 using machines he imported from Japanese company Tanaka. His company was later renamed CJ CheilJedang after it was spun off from Samsung in the 1990s. 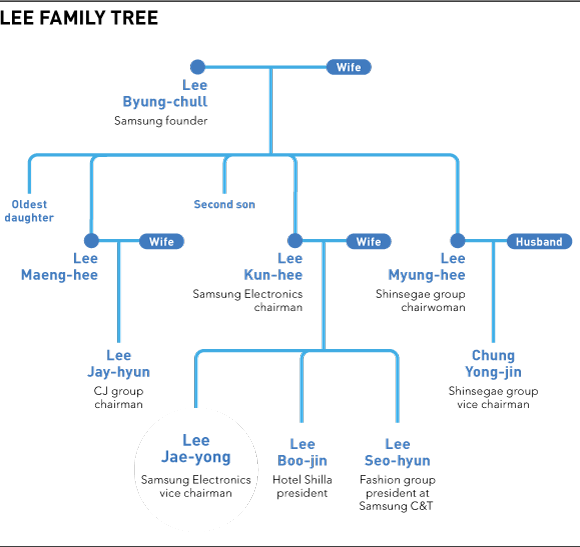 Biographers characterize Lee as a careful businessman. "Hoam (Lee's other name) checked everything before doing something. He would only walk across steppingstones after seeing others cross them safely," said Chung Kyu-woong, a retired journalist who authored a 2012 book titled "Uncomfortable Truths of the Samsung Family."

A turning point for Samsung came in the early 1960s when Gen. Park Chung-hee, father of impeached South Korean President Park Geun-hye, took power in a military coup. The young general needed money to stay in power, and the company was eager to receive special treatment under the authoritarian regime. This association marked the start of Samsung's long relationship with South Korea's political elite.

That relationship, though, was not always cozy. In his autobiography, Lee wrote of his distress at being "bullied" by those in power, and said he even considered becoming a politician himself so that he would no longer be at the mercy of the government. In the end, he did not go into politics. Instead, he broke in to the media industry, setting up television network TBC and newspaper JoongAng Ilbo as a means of countering political pressure.

Believing electronics to be the next growth engine, Lee set up Samsung Electronics in 1969. Today it is the crown jewel in the Samsung empire. The company started producing cheap black-and-white TVs, which found markets in the U.S. and Canada. What made it a global player, however, was its focus on semiconductors from the 1980s. It was in this area that Lee Kun-hee, the third son of the Samsung founder, made a name for himself. He had insisted that the company buy Korea Semiconductor in 1977, predicting -- accurately -- that demand for semiconductors would soon soar.

The younger Lee took the helm of the group in 1987 after his father's death.

Now, the torch has been passed again. In May 2014, Lee Kun-hee was hospitalized after suffering a heart attack, leaving the nation's largest conglomerate to his only son, Lee Jae-yong. The new Harvard-educated leader, whose official title is vice chairman of Samsung Electronics, has tried to reorient the group by focusing on three key areas: electronics, finance and biopharmaceuticals.

But the government ties that helped his family's business empire grow now threaten its future. Prosecutors in South Korea allege that Jae-yong gave bribes in return for government favors.

Samsung is facing one of the most critical moments of its 80-year history, but some analysts see this as an opportunity.

"The crisis can help Samsung reform its corporate governance and remove a negative factor from it. I am sure this would push up its valuation," said an analyst at a global investment bank who asked not to be named.