Faced with a worsening labor shortage, food processors are turning to automation TOKYO Think of industrial robots and you probably picture machines with huge mechanical arms performing precision welds on cars in a shower of sparks, or maybe an unblinking eye scanning a line of computer chips.

But a less-noticed industry where automation is taking off is food processing, and for good reason. The worker shortage in the sector is serious and getting worse. Robotics companies are coming to the rescue with a new generation of machines that can perform the delicate, high-dexterity tasks that previously only human workers could do. 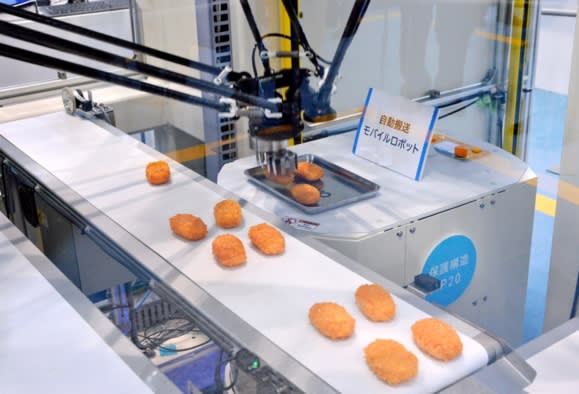 Omlon's robot picks up 60 croquettes per a minute.

Omron's new conveyor pick-and-place robot was so compelling that food processors wanted to purchase the machine right off the exhibition floor at the International Food Machinery & Technology Exhibition, or Fooma Japan, in June.

BLINK AND MISS IT Omron's robot scanned croquettes as they sped along a conveyor belt, picking out the good ones and placing them on another line for packaging at a rate of one per second.

"Our next challenge is to design a system for fresh foods," Ochi said. A machine that could handle the various sizes and shapes of vegetables, for instance, would be a godsend for fresh-food processors, which face a particularly acute labor shortage.

Kawasaki Heavy Industries is another company that has turned its attention to the food industry. "Factories that operate around the clock making bento boxed meals and other prepared foods for convenience stores have trouble staffing their operations, so this is the kind of place where robots can be put to good use," said Yasuhiko Hashimoto, manager of the company's robot business center.

Its most advanced machine, the dual-arm duAro robot, can operate alongside workers on bento production lines. The robot can perform a variety of tasks, from placing the food in the boxes to sprinkling sesame seeds on the rice and closing the lids. On pizza lines, the duAro can spread the sauce and put on the toppings.

Until recently, industrial robots were not well suited for food processing plants. They typically need railings to prevent accidents. But the arms of the duAro are covered in a light, soft plastic that does not hurt workers who happen to get in the way, eliminating the need for railings.

Denso Wave, the robotics unit of autoparts maker Denso, had a booth at Fooma Japan for the first time in June, exhibiting several new machines for the food and beverage industries. One was a robot with a lightweight arm that can move very quickly to grab and pack plastic bottles, for example. Another device, a robotic barista, made and served cups of coffee for visitors, showing off the company's articulated robot arm that can handle objects with humanlike skill.

Industry rivals like Fanuc and Yaskawa Electric have also begun to focus on sales of food processing robots, recognizing the need in an industry where it has become hard to find workers, even at 2,000 yen an hour.

TASTY MARKET The domestic market for food-making machinery was worth 480 billion yen ($4.41 billion) in 2016, according to the Japan Food Machinery Manufacturers' Association. That is almost as large as the market for machine tools. If manufacturers in other sectors jump in with new technology, food processing could see a huge rise in productivity. Most players in Japan's food equipment sector are small to midsize companies, but that has not stopped them from developing specialized machines tailored to specific customer needs.

Nantsune, Japan's largest maker of meat slicers, was also the country's first. It has come out with a variety of hit products since it was founded in 1929. Its latest prototype is the world's first fully automated chicken portioner and packager.

"Meat processors have a horrendous time finding and keeping workers, so there is a real need for help. Hopefully we'll have the commercial version ready in a year or two," said the company's chief engineer.

What makes it amazing is its range of capabilities. The machine can do the jobs of dozens of workers, handling 600 bags of vacuum-packed chicken breasts an hour, or 1,200kg of chicken.

The system tears open the bags, kneads the meat, injects clean air, then completely opens the bags with a cutter. Next, the chicken is carried along a conveyor, where it is spread apart and dried before being placed in trays by a robot arm equipped with an image sensor. Smaller companies from other sectors are also entering the market for food processing equipment. Synthemec's main product is parts fabrication machinery. Its clients include companies such as Aisin Seiki, a big autoparts maker. But its latest device does a job that most people would think is distinctly low-tech: removing eyes from potatoes.

Developed in cooperation with the government-affiliated Hokkaido Research Organization, the device uses a pair of cameras to photograph peeled potatoes. The eyes are identified as darker spots and removed with a tiny drill bit that spins at 2,000rpm.

The prototype can process 900 potatoes of average weight an hour, doing the work of 10 people.

"There has been need to automate the process for decades, but now robotics and image processing have advanced remarkably," said Yosuke Nakanishi, in charge of co-development with Synthemec at the Hokkaido Research Organization.