The legendary founder of Taiwan's Giant cycles into the sunset 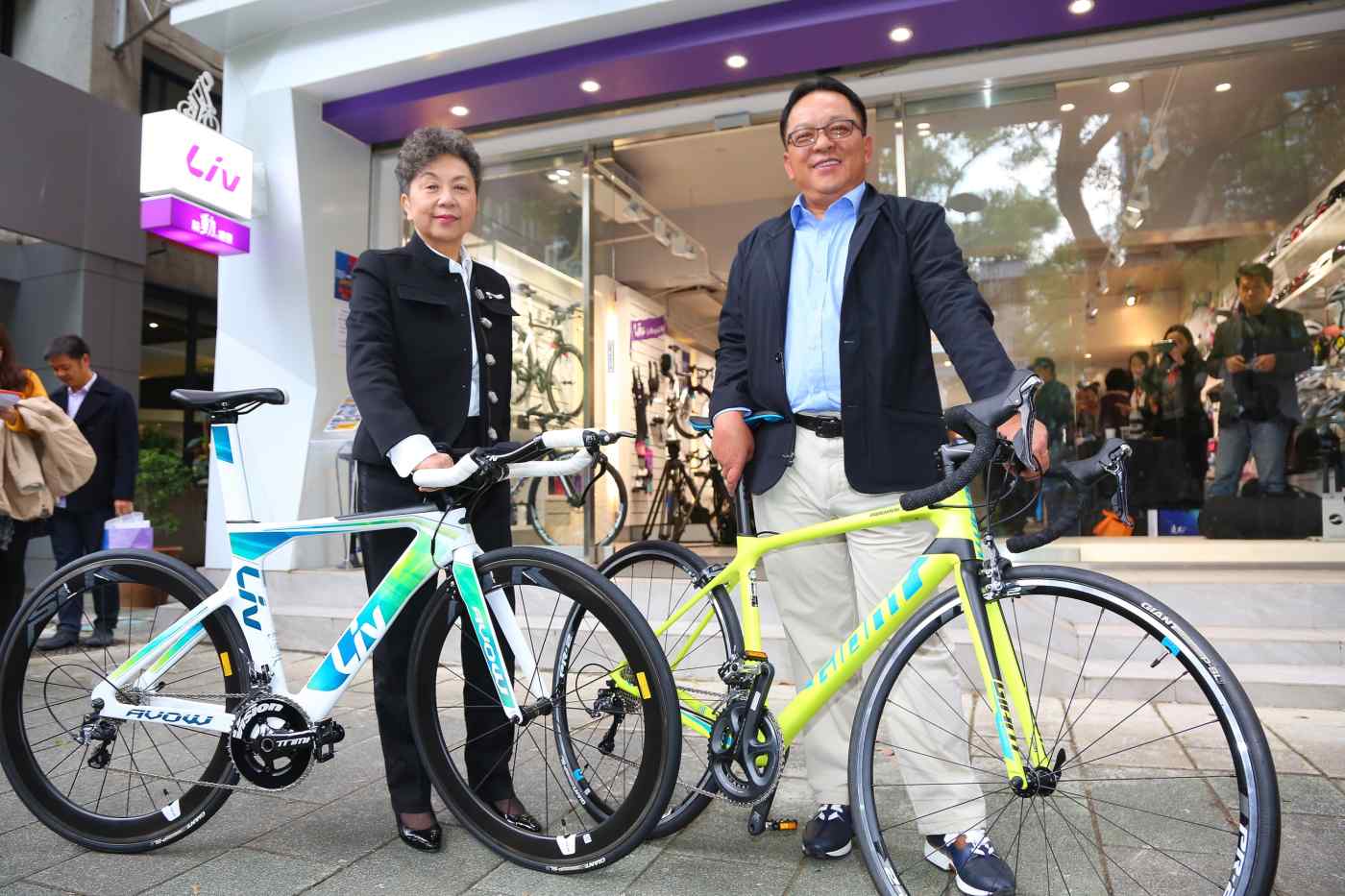 TAICHUNG, Taiwan At 82, King Liu is living proof that age is nothing but a number. The founder and chairman of the world's largest bicycle maker, Giant Manufacturing, still bikes some 30km twice a week from his residence in downtown Taichung, in central Taiwan, to the company's headquarters in the coastal town of Dajia. Liu is famous for completing two-wheeled treks that most people half his age would not even attempt. At 73, he cycled 966km around Taiwan for the first time in his life. At 75, he led teams that made the 1,668km trip from Beijing to Shanghai, and two years ago he toured 264km around the Seto Inland Sea in western Japan.

To celebrate his 80th birthday, Liu again circled Taiwan over the course of 12 days. But this year, the most important item on his to-do list is guiding a new generation of leaders at Giant.

On Dec. 16, Liu tendered his resignation together with the company's 67-year-old chief executive, Tony Lo. Over the last four decades, the two men transformed a tiny contract manufacturer into the world's biggest cycling brand, with more than 12,000 dealers across 80 countries. 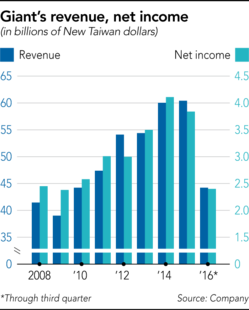 "It's time for me to truly step down and let the younger generation really make their own decisions and run the company," Liu told the Nikkei Asian Review.

The founder is passing the baton to his niece, Bonnie Tu, 67, and his only son, Young Liu, 57. Tu, the company's chief financial officer and executive vice president, will take the chairman's seat, while Young Liu, the chief operating officer, will become chief executive. The moves will take effect on Jan. 1.

"I have run this company for 44 years, and that's a very long time," King Liu said. "All the employees are still doing things according to my instructions and directions, but this could eventually hinder their creativity and kill their entrepreneurship to try new things."

VULNERABLE MOMENT Investors are closely watching the changes. Giant shares tumbled 4.5% in the week through Dec. 16 to close at 188.50 New Taiwan dollars. The company on Dec. 12 had invited the media to a news conference to announce its new leadership.

Joseph P.H. Fan, a professor at the Chinese University of Hong Kong and an expert on family-run businesses, said that while Giant may have made sufficient preparations, "the weakest time period of any given family business is the transition from the old to new generation."

Born into a business family in 1934, Liu dropped out of high school and tried running various enterprises -- from factories for wood products and screws to freight and trading companies. He even dabbled in eel farming before hearing from friends about opportunities to assemble bicycles for overseas companies.

Giant began in 1972 as one of many faceless factories vying for bike orders, but the first few years were far from smooth. At the time, the "Made in Taiwan" label carried connotations of low quality.

Soon after founding Giant, Liu met Lo, his eventual business partner. Lo was fresh out of university and, for his first job, had conducted a thorough survey of Taiwan's bicycle sector.

The company gradually expanded its operations thanks to orders from Schwinn, an American bike brand that at one point contributed up to 75% of Giant's sales. Liu, however, knew the contract manufacturing business would not last forever.

Indeed, Giant faced a crisis when Schwinn abandoned the partnership in the 1980s and turned to Chinese contract manufacturers. That prompted Liu to take Giant global and begin marketing bikes under its own brand.

In 1986, Giant set up its first overseas subsidiary, in the Netherlands. It soon pushed into the U.S., Germany, the U.K., France, Japan and China as well. To enhance its competitiveness, the company began developing advanced materials for premium bicycles.

In the late 1980s, Giant became the first to introduce carbon-fiber frames, which are much lighter than traditional steel ones, to the mass market. Prior to that, carbon fiber was used only in a few handcrafted models. The road-racing circuit took notice, and Giant became a household name for sports bikes in the 1990s.

"Liu is someone who always thinks ahead of the times," said Robert Wu, chairman of Taiwan-based KMC Kuei Meng International, the world's largest bicycle chain provider. "It's thanks to his pioneering efforts that Taiwan can preserve a high-quality and complete cluster of bike suppliers. Without him, our company could never do this well."

Liu put Taiwan's bike industry on the global map, and in the early 2000s, he took it upon himself to help keep it there. Facing cost concerns and stiff competition from Chinese rivals, assemblers and parts suppliers were increasingly relocating to China or Southeast Asia. This hollowing-out was accompanied by a serious brain drain.

To give the industry a second wind, Liu in 2002 formed a business alliance called the A-Team. The idea was to share marketing and manufacturing know-how and unite Taiwanese suppliers, allowing them to focus on innovation rather than price-cutting. Liu visited his company's longtime rival, Merida Industry, and won its cooperation. He persuaded many other key suppliers to participate in the alliance. The group grew to include several of the world's leading bike component vendors, such as KMC International, VP Components, the world's top pedal maker, and Kenda Rubber Industrial, the largest bike tire provider.

FISH THEORY "King wants the whole supply chain to grow together, rather than working only for Giant's sole benefit, and that's why everyone respects him so much in the bike industry," VP Components Chairman Victor Lin said.

"We admire his famous fish-farming theory: If everyone only wants to catch fish but no one wants to feed the fish, the fish will soon die out -- and he practices what he preaches," Lin said.

With Liu leading the way, Taiwanese bike and component makers have thrived. The average unit price for bikes exported from Taiwan grew from roughly $110 in the year 2001 to more than $473 in 2015, according to the Taiwan Bicycle Association. 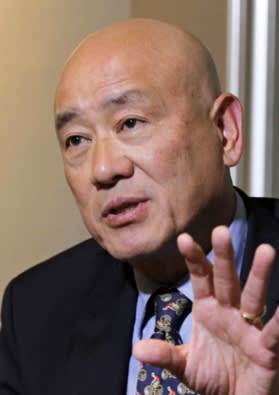 This compares with an average price of $78 for bikes exported from China in 2015, according to the Taiwan Institute of Economic Research.

While Giant now makes the bulk of its midrange bikes in China, it insists on manufacturing its most advanced models in Taiwan. The prices of these premium products can run as high as $10,000.

All told, Giant produces around 6 million bikes a year, primarily in China. The high-end production in Taiwan accounts for around 1 million, while another 400,000 bikes are made in the Netherlands.

Liu's decision to hand over the reins, however, comes at a pivotal moment for the business.

After years of strong sales growth, Giant this year expects its first slide in revenue since 2009, due to China's slowing economy.

Giant currently generates more than 70% of its revenue in Europe, North America and China. "It has been two sluggish years for the bike industry since the first quarter in 2015, as the whole industry was hit hard by subdued global economic growth, especially the substantial slowdown in China," said Peggy Shih, an analyst at Yuanta Investment Consulting in Taipei.

TOUR DE FRANCE TACTICS Meanwhile, smaller Chinese bike makers like Shanghai Phoenix Enterprise and Zhonglu have started to put pressure on Giant by moving up the chain from low-end to midrange models, noted Johnson Wang, an analyst at the Taiwan Institute of Economic Research.

"The competition could continue to intensify in a slowing market," Wang said, "and a lot of smaller bike makers will even go out of business after the downturn."

Liu selected family members, who are also company veterans, to succeed him -- a common practice in Taiwan outside of the tech sector. Tu, the incoming chairman, on Dec. 16 likened the new management lineup to a Tour de France team, in which every member plays a key role. "Our company's new leadership will shift from the strong and centralized management over the past four decades to a more professional teamwork style," she told reporters.

The emphasis is on reforming Giant's decision-making process so it can quickly adapt to changes in the global market.

At the same news conference, Young Liu said he felt both encouragement and pressure as the son of an iconic businessman and acknowledged the responsibility on his shoulders. He pledged that as chief executive, he will strive to foster a service-oriented company that prospers with both brick-and-mortar stores and e-commerce platforms.

"It definitely is not an easy task to take over the bike empire, especially when it is extremely successful and when the transition comes at a time when there are so many uncertainties," he said.

Tu, who signed on as King Liu's special assistant in 1978, has long helped supervise Giant's finances, investments and risk management, and she successfully took the company public in 1994.

Young Liu joined the company as a quality assurance specialist in 1990 and immersed himself in the details of bicycle manufacturing. He helped bring Giant to China in 1992 and has since propelled the company to explosive growth in the country. Giant has been the top brand in China for the past five years, according to the Taiwan Institute of Economic Research.

King Liu in the interview reflected on why he and Lo are retiring, saying it will give the company a fresh start.

"What we have accomplished so far is only the first step for Giant to become visible all over the world," he said. "My ultimate hope is that Giant can be a company that can last for centuries and continue to keep the entrepreneurship spirit as it moves forward."