Companies in the Association of Southeast Asian Nations are on the rise. Forty-four listed companies boasted market capitalizations of $10 billion or more as of the end of October, while 24 reported more than $1 billion in net profit during the most recent financial year.

The table here lists the top 50 ASEAN companies by market capitalization. Regional giant Singapore Telecommunications tops the list, along with Singapore's three biggest banks -- DBS Group Holdings, Oversea-Chinese Banking Corp. and United Overseas Bank -- Malaysia's Malayan Banking (Maybank) and state-owned oil and gas company PTT of Thailand. They are also the most profitable listed companies in the region. These six and 37 others from the top 50 list are included in the ASEAN 100, more than 100 companies that the Nikkei Asian Review has chosen based on a range of criteria. (For a full explanation and complete list of ASEAN 100 companies, see the NIKKEI Announcement section in the latest issue of our magazine).

Major modern-day breakthroughs, such as cars and cellphones, were first developed companies in other parts of the world. Now, ASEAN companies have the chance to become future pioneers. By enhancing and extending our coverage on corporate activities, we aim to follow the very front line and provide deeper insight into the region's economy and businesses.

* Names of ASEAN 100 companies in bold on first reference 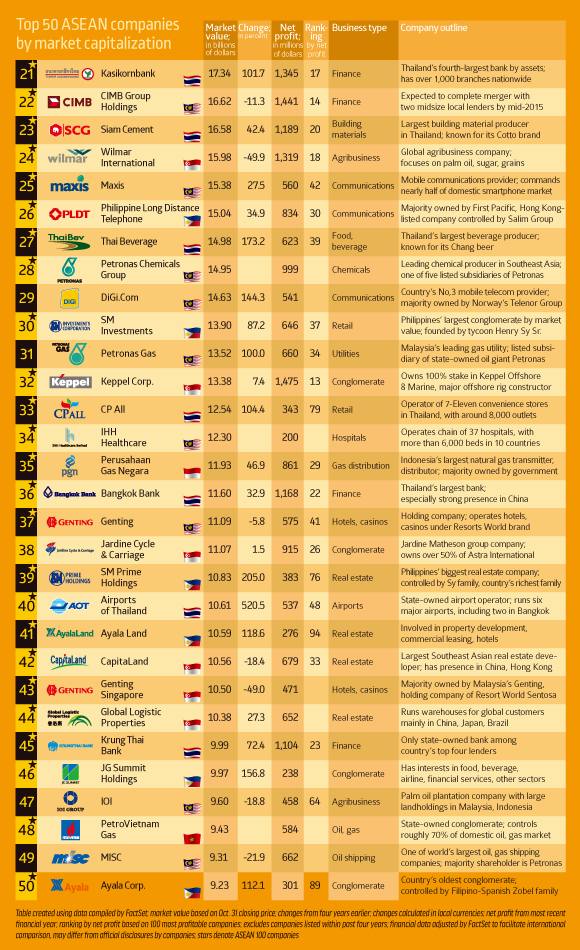