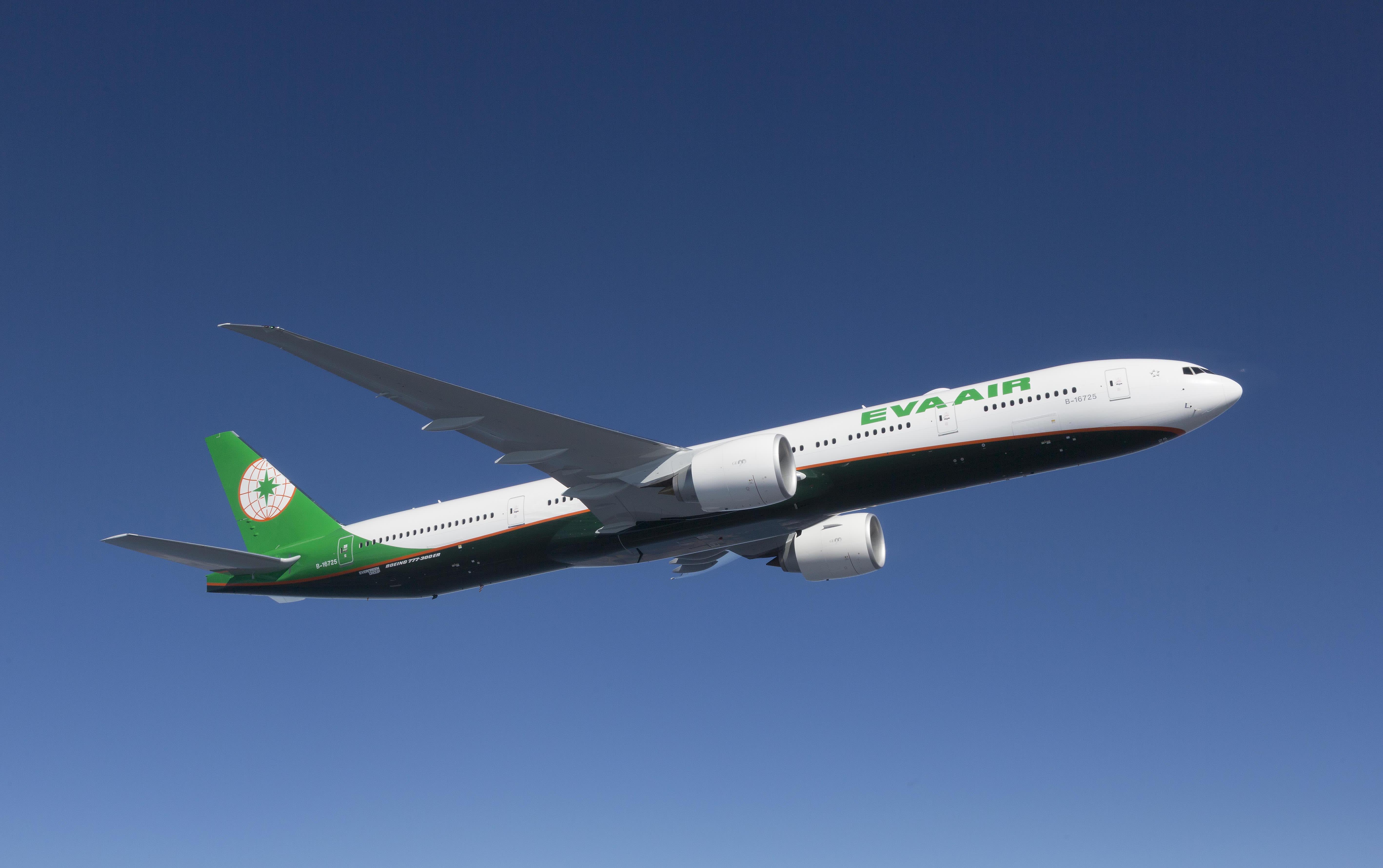 TAIPEI   When Capt. Chang Kuo-wei guided his Boeing 777-300ER up and off the runway at Taiwan Taoyuan International Airport on March 11 for the Eva Airways BR225 early flight to Singapore, nothing on the horizon signaled trouble ahead. And while the journey proved uneventful, by the time Chang touched down a few hours later, his career had been turned on its head -- by his brothers.

The stocky, 45-year-old pilot is the fourth and youngest son by the second wife of the late Evergreen Group transport magnate Chang Yung-fa, who died on Jan. 20 of natural causes at age 88. "K.W." Chang earned his wings in 2010 and became chairman of Eva Airways in 2013. It was part of a lengthy reconciliation with his father after K.W. walked away from the presidency of the airline in 2006 after a decade of working his way up the ladder. After quitting, K.W. followed his passion for aviation by moving to the U.S. to learn how to fly Boeing 777s.

Family trouble was stirred up anew on Feb. 18, when K.W. made public his father's will appointing him as successor and principal personal beneficiary. K.W., who had been Evergreen Group vice chairman since 2014, promptly bumped himself up to the post of group chairman. However, his three older brothers were not happy about the move, saying details of the succession were still being discussed. Chang Kuo-wei was piloting a company aircraft to Singapore when he was ousted as chairman of Eva Airways on March 11 by his brothers.

By the time K.W. landed at Changi Airport at around noon on March 11, a boardroom coup was in the works in downtown Taipei. At 4 p.m., the three half brothers by his father's first wife, Lin Chin-chih, convened an unscheduled board meeting at the group's headquarters. The putsch had been well-planned, and an intermediary dispatched at the last minute was unable to stop the momentum.

In a matter of 30 minutes, seven of the nine board members voted to replace K.W. with Steve Lin Pao-shui, a company veteran. K.W. loyalists were fired or reassigned, and a staunch ally, President Austin Cheng, opted for early retirement after more than 20 years with the airline.

Shares in Eva Airways closed unchanged at 17.95 New Taiwan dollars before news of the board meeting in the late afternoon got out, but they dropped 2.5% next trading session. Although K.W. retained a position on the board, the sibling rivalry did not stop with the airline. On March 16, the older brothers removed K.W. from the board of Evergreen International Storage & Transport, and two days later booted him from the board of Evergreen Marine. All the while, the group's shares continued to slide.

When K.W. returned from Singapore, it was as a passenger, not a pilot. Since then, the four brothers have not met face to face. And the siblings have decided to send lawyers as their proxies to an Evergreen meeting to discuss their father's will.

Eva Airways and Evergreen Marine, the world's fourth-largest shipping company by capacity, are the Evergreen crown jewels, with a combined worth of some NT$112 billion. The group's dozen or so interests also include buses, hotels, publishing and steel.

Chang's remarkable rise made him powerful friends. In the foreword to his memoir, former British Prime Minister Margaret Thatcher described his life as an embodiment of Taiwan's astonishing success.

Chang's entrepreneurial efforts were richly rewarded, but the hot-tempered magnate's family life was stormy. He feuded with his four sons and his son-in-law, Cheng Shen-chih, all of whom dropped out of the family business at various times. He also had a daughter, Chang Shu-hua, with his first wife, Lin Chin-chih. Both women have passed away.

K.W., the fifth child, was born out of wedlock to Lee Yu-mei, a longtime mistress whom Chang later married. He gradually emerged as his father's likely heir but remained at odds with his half brothers, who controlled far more Evergreen shares: combined stakes of over 30% in the airline and nearly 40% in Evergreen Marine, compared with K.W.'s 11.45% and 4.24%, respectively. They also hold the majority stake in the holding company, Evergreen International.

Nevertheless, K.W. came to be seen as the airline's public face. His aggressive marketing efforts included a partnership with Japan's Sanrio that enabled him to create a fleet of Hello Kitty planes. The older sons rarely appeared in public, and reportedly disapproved of their brother's expensive advertising campaigns and rapid fleet expansion.

K.W. championed the switch from Boeing 747s to the more fuel-efficient twin-engine 777. The airline's NT$260 billion purchase last November of 26 new Boeings was the largest order in Taiwanese commercial aviation. It was a "bold" move for a stagnant industry, according to Marc Wang, an analyst at KGI Securities. 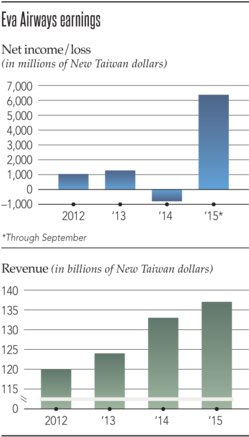 The results suggest K.W.'s tactics have been working. In 2015, in his third year as the airline's chairman, Eva Airways booked revenue of NT$137.16 billion, its best performance since going public in 1999. The airline's net income of NT$6.37 billion for the three quarters ended September 2015 was better than the company's full-year profit for every year since 2010.

BLOOD FEUDS   According to KGI's Wang, investors are dismayed by the Chang family feud. He said "recent turbulence caused by the succession battle" would remain in the short term, and that the negative impact may linger for a long time.

Joseph Fan, an academic at the Chinese University of Hong Kong who has long followed the Evergreen Group, said that every time a Chang family member drops out of one of its family-controlled listed companies, the company's market capitalization falls about 10% on average.

"Succession has always been the Achilles' heel of almost every family business," Fan told the Nikkei Asian Review. He says his research on 217 family-controlled companies in Hong Kong, Singapore and Taiwan has found that these entities shed about 60% of their market capitalization during succession disputes and seldom recover such losses. The bumpy Evergreen transition is a good example of poor governance in family-run businesses, Fan said.

Taiwan appears particularly susceptible to these corporate family dramas. Over 70% of listed companies there are family businesses, and only about 5% have a clear succession plan laid out in advance. This is less than the global average of around 16%, according to accounting company PricewaterhouseCoopers.

Pederson Chen, head of family business services at KPMG in Taipei, said that among the roughly 300 scions of Taiwanese family businesses he has interviewed over the years, all said they did not dare raise the question of succession with their parents.

A chaotic succession such as Evergreen's damages the company's legacy and causes an executive exodus, according to William Seetoo, a professor at National Chengchi University's College of Commerce in Taipei. "Evergreen is one of the more extreme examples of how terrible things can be without a feasible succession plan," CUHK's Fan said. "It is not unique in family businesses, especially when the founder has [had] more than one spouse. In those circumstances, it is almost impossible for a family to remain harmonious."

CHANG'S LEGACY   Chang Yung-fa was born on Oct. 6, 1927, to a poor family in the northeastern Taiwanese port town of Suao, where his father worked as a carpenter. At 7, he moved north to Keelung, Taiwan's second-largest port. He spent his childhood by the sea, which he often referred to as his true home. After graduating from Taipei Commercial High School, he worked for a Japanese shipping line, eventually becoming a captain there. After more than 10 years at sea, Chang went into business with friends in 1968 with a 15-year-old freighter, the Central Trust. In less than two decades, Evergreen Marine became a significant force in global shipping. In 1989, Eva Airways was founded as Taiwan's first private airline. By the end of 2015 it was Taiwan's second-largest carrier after China Airlines, boasting a fleet of 70 aircraft serving 195 countries, and an unblemished safety record.

Chang's business philosophy was both uncompromising and ethical. "I think the top priority for those seeking success should be morality," he said. "Morality is extremely important -- people should be honest, truthful, sincere and realistic when operating businesses and dealing with other people."

In 2012, Chang told local media he was never going to retire and would work until he collapsed at his desk. By that point, however, he had delegated day-to-day operations to others.