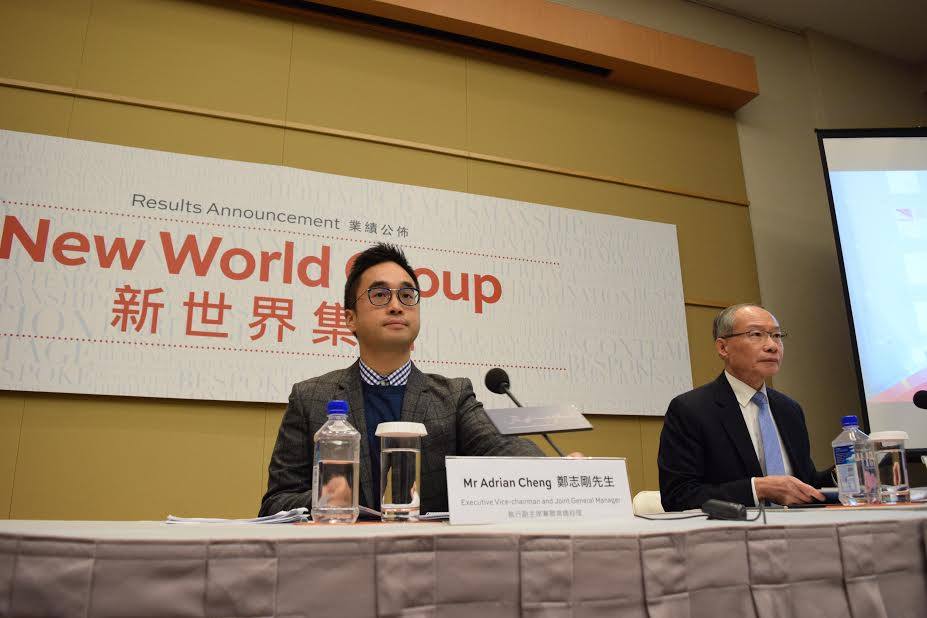 HONG KONG -- It must have been a symbolic day for the third-generation leader of Hong Kong developer New World Development, Adrian Cheng Chi-kong. Cheng took on a new title and chaired his first solo earnings briefing in the absence of his sick chairman father, Henry Cheng Kar-shun for the first time.

One of the largest developers in Hong Kong by market capitalization, New World is part of the Cheng family's business empire that spans Chow Tai Fook Jewellery Group, bus companies, hotels and department stores in Hong Kong and mainland China.

"His recovery has been good. He will meet with everyone soon," said Cheng, an executive director, speaking of his father's health on Wednesday. The elder Cheng, 70, failed to show up for the first time at the briefing since he took the reins in 2012. News that he suffered a stroke surfaced in late January, arousing concerns over the group's succession planning.

New World later confirmed in a statement that the chairman had not been "feeling well" and was currently on leave. Company executives tried to play down the impact on the group, nonetheless. "His condition is good. We still consult him on big matters... and he continues to be involved," said Tsang Yam-pui, chief executive of New World's infrastructure subsidiary NWS Holdings.

But it was also on Wednesday the younger Cheng was re-designated to the role of executive vice-chairman and general manager, following the departure of Chen Guanzhan, an executive director and joint general manager, effective from March 1. The group's earnings statement filed with the stock exchange on the same day showed that the younger Cheng signed the important document, rather than his father. 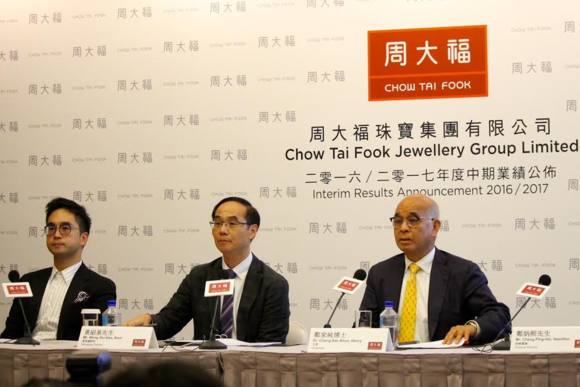 "Please don't over-interpret it," said Cheng, stressing the recent leadership reshuffle was not a "job promotion" and had nothing to do with his father's health. "It just happened to be a coincidence."

Cheng's remarks came at a time when the developer is trying to divert attention from its leadership and turn investors' focus on its business. Last September, Cheng's grandfather and New World's founder Cheng Yu-tung passed away at the age of 91, raising doubts if the family business would thrive without him.

New World posted an annual 31.4% surge in earnings in the six months ended in December, on the back of falling revenue.

First-half net profit reached $4.34 billion Hong Kong dollars ($559 million), boosted by a 10-time jump in fair value gain of HK$346 million due to the revaluation of its investment properties. The group also benefited from one-off gains of HK$638 million on the restructuring of a joint venture and the recalculation of equity interest in a transport subsidiary.

Underlying profit, excluding the impact of property revaluation, was HK$5 billion in the period, up 52.4% from a year ago. Revenue fell 21.1% to HK$26.64 billion, dragged lower by declining property and contracting sales. Revenue from Hong Kong slumped 33% to HK$14.6 billion, while that on the mainland was up 5.2% during the period.

New World's results came on the heels of a strong rebound in Hong Kong's property market. Despite cooling measures introduced in November, home prices have increased 2% since then and were 0.06% short of the historical high in September 2015, according to the Centa-City Leading Index, a gauge of secondary home prices.

Cheng forecasts home prices in the territory will grow 8-10% in the remaining year, adding that the group surpassed its HK$10 billion contracted sales target for the fiscal year in seven months. "We are cautiously optimistic about our sales," he said, without revealing a new sales target for Hong Kong.

Its rental income, which was up 5.5% in the first half, could also receive a boost with the redevelopment of the New World Centre. Located in the tourist district of Tsim Sha Tsui, the hotel-cum-office commercial property is scheduled for completion later this year. Some 40% of the office space were rented out to clients including Japan-based Mizuho Financial Group.

On the mainland, the group achieved 80% of its sales target of 16 billion yuan ($2.33 billion) as of December, with a focus on Beijing, Shanghai and the Pearl River Delta. In the next five years, it plans to roll out its K11 properties, which combine artistic exhibits with retail and office space, in nine major cities such as Wuhan, Shenyang and Guangzhou.

New World's shares hit a near four-month peak at HK$9.78 on Wednesday, closing 3.5% higher. The stock has risen 19% since the start of the year, outperforming the benchmark Hang Seng Index's 10% gain.