A logo of Toshiba Corp is seen at its headquarters in Tokyo. (Photo by Tsuyoshi Tamehiro)
Business

Toshiba at a turning point: what does the future hold?

TOKYO -- Toshiba's turmoil may finally be reaching a turning point. After months of flip-flopping, the Japanese conglomerate finally agreed on a deal to sell its prized memory unit to a consortium led by U.S. private-equity firm Bain Capital on Thursday, an important step in its quest to get back on its feet.

But how did the 140-year old company get into this mess? Here is a rundown of what matters ahead of Toshiba's extraordinary shareholder meeting on Oct. 24, at which the company aims to get approval from its shareholders.

What are the roots of Toshiba's woes?

Westinghouse filed for bankruptcy, and along with debts Toshiba had guaranteed for Westinghouse, total losses for the Japanese company amounted to 1.2 trillion yen. This plunged Toshiba into negative net worth of 552.9 billion yen as of the end of fiscal 2016.

The chief mover behind Westinghouse's acquisition of Stone & Webster was Chairman Danny Roderick. The massive loss called into question Toshiba's ability to keep a leash on its now bankrupt U.S. subsidiary. While Westinghouse had plant construction technologies that Toshiba did not have, Toshiba's insistence on making nuclear power-plant construction its core business played a role in its downfall. 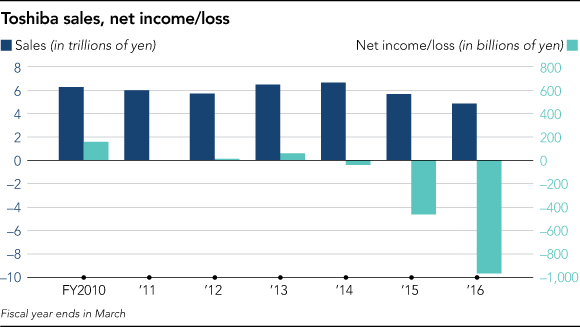 Why did Toshiba need to sell its memory unit?

Toshiba's negative net worth in the year ended March 2017 means that if it ends the current fiscal year in negative net worth, it will be delisted from the Tokyo Stock Exchange. Toshiba needs the expected 2 trillion yen from the sale of its memory unit to plug the hole in its books and avoid that fate.

A delisting would not necessarily run Toshiba aground, but would further damage its already tarnished reputation, both socially and financially. It would also likely mean that financial institutions will review their lending conditions and withdraw some loans. Both would significantly damage Toshiba's ability to operate new and existing businesses.

Toshiba initially wanted to sell the unit by the end of June, prioritizing negotiations with the Bain consortium. A deal failed to materialize, leading Toshiba to start negotiations with a consortium led by its business partner Western Digital. That negotiation also hit a snag, prompting the Japanese company to announce that it would once again prioritize the Bain consortium. With the deal with the Bain consortium now concluded, Toshiba is hoping to gain approval from its shareholders at the Oct. 24 shareholders meeting. Toshiba's creditors are believed to have pressured the company into deciding, taking hostage 680 billion yen worth of commitments due to run out at the end of September.

Why did it take so long for Toshiba to decide?

Toshiba's indecision was partly a result of the importance of the semiconductor technology to Japan. Toshiba's semiconductor memory is used for a type of data storage device called "solid state drive" (SSD), which manages confidential information and incorporates advanced encryption technology. The government has been extremely wary of the sale of such technology to overseas companies, as it could lead to leakage of confidential information related to military and diplomatic secrets.

Initial negotiations with the Bain consortium stumbled for this reason. The consortium includes South Korean chipmaker SK Hynix. The Taiwanese company Hon Hai Precision Industry, better known as Foxconn, was also in the running to acquire Toshiba Memory. However, Foxconn was always a dark horse for the same reason.

Under the concluded deal with the Bain consortium, SK Hynix will be firewalled from accessing Toshiba Memory proprietary information and will not be permitted to own more than 15% of the voting rights for a period of 10 years.

Another factor in Toshiba's slow decision-making was its corporate culture. The conglomerate is known for treating its former presidents and chairmen with great respect, allowing them to wield influence even after stepping down. With so many ex-presidents loitering around, it was difficult for current management to take matters into their own hands.

There was also the "silo effect." Toshiba's President Satoshi Tsunakawa spent his entire corporate life in the medical equipment department. Prior to becoming vice president in 2015, he had never been to the Yokkaichi plant, the memory business's base. Nor had he been to a nuclear power plant. Western Digital CEO Stephen Milligan told Tsunakawa he needed to make the ultimate decision. But making a big decision in a field you do not know well can be daunting. What are the remaining hurdles to the sale?

The biggest risk to the deal with the Bain consortium is litigation by Western Digital. The U.S. company insists that transferring the memory operations without its consent would run afoul of joint-venture agreements. The American hard-drive manufacturer took the dispute to the International Court of Arbitration in May, seeking to block the sale. The financial involvement of Innovation Network Corp. of Japan and the Development Bank of Japan is contingent upon whether the litigation risk is resolved.

Another problem is time. Toshiba needs to turn around its negative net worth by March 2018. But anti-trust reviews around the world will take time. The specific form of SK Hynix's involvement in the arrangement remains unclear, and the review process may not end in time for Toshiba to remain listed on the Tokyo Stock Exchange.

The flash memory unit is Toshiba's cash cow. Of the 96.7 billion yen of operating income the conglomerate made in the first quarter of fiscal 2017, 90.3 billion yen came from the memory business. After the sale of the unit, Toshiba intends to focus on its energy and infrastructure businesses. But the two made operating losses of 1.7 billion yen and 1.6 billion yen, respectively, in the same period.

But the company's importance to Japan means any scenario that it will cease to exist is unlikely. Toshiba is a key player in the decommissioning of the Fukushima Dai-ichi nuclear power plant, which suffered a meltdown after being critically damaged by the earthquake and tsunami that struck northeastern Japan in 2011. The conglomerate is also vital to Japan's defense industry, producing semiconductors for military radars. Toshiba will continue the business after the sale of its memory unit.

It also has history on its side. The 140-year-old company was set up by Hisashige Tanaka, dubbed the "Thomas Edison of Japan," and was instrumental in making Japan a manufacturing powerhouse. It was an integral part of Japan Inc. after World War II, playing a vital part in Japan's industrial strategy, led by the Ministry of International Trade and Industry and the Industrial Bank of Japan. The company has also held sway in Keidanren, Japan's biggest business lobby group, supplying its chairman on numerous occasions.

The most likely scenario is that Toshiba's role as a conglomerate will end, and it will be more of a business-to-business company.

Under current plans, the "New Toshiba" hopes to post sales of 4.2 trillion yen and an operating profit of 210 billion yen in fiscal 2019.