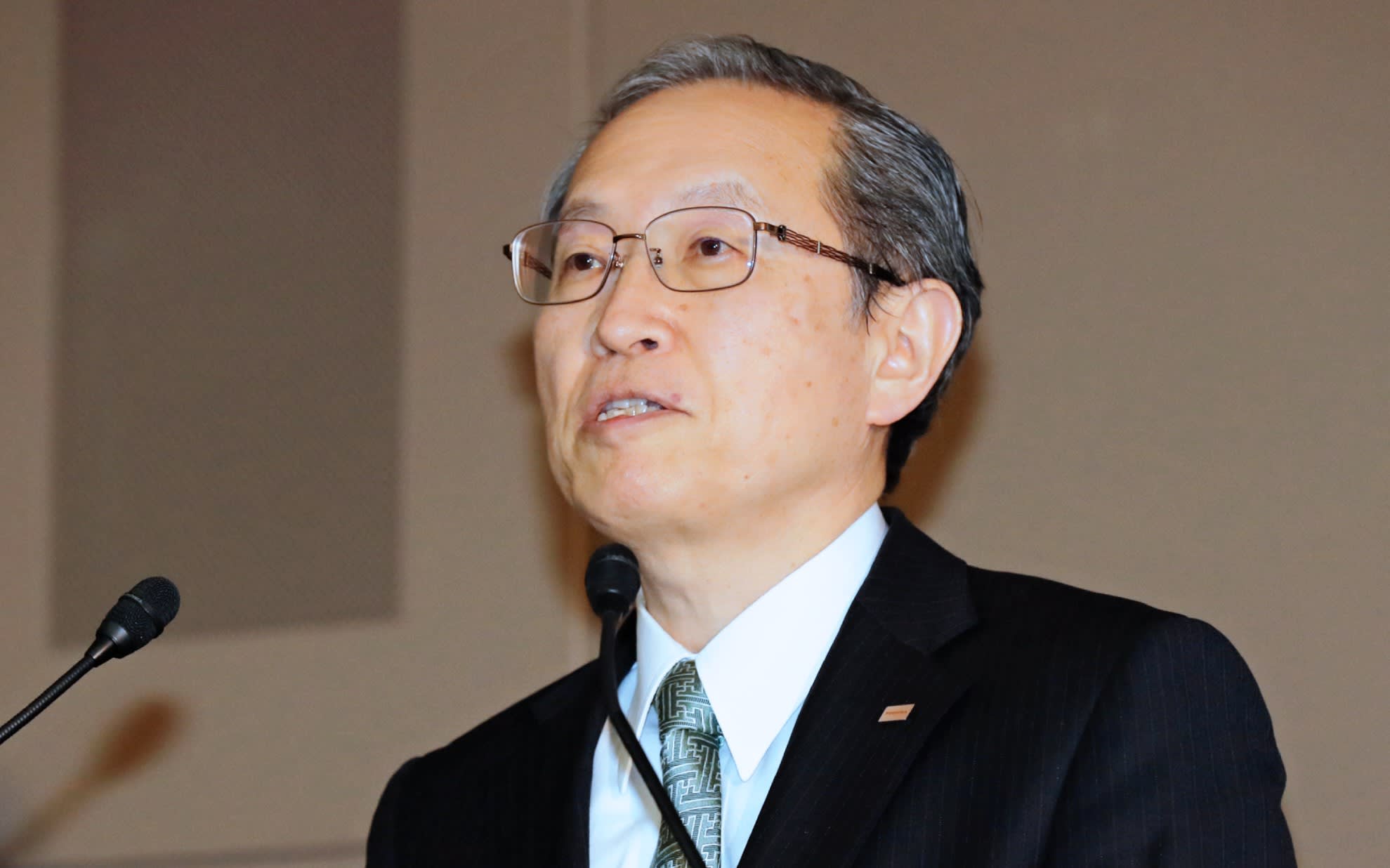 TOKYO -- Toshiba is sinking in a sea of red ink as huge losses from its U.S. nuclear power unit have sunk a big hole in the company's bottom line.

The Japanese heavy machinery maker on Tuesday said it had suffered a loss of over 700 billion yen ($6.12 billion) in its nuclear power business.

Toshiba's quandary is another sign of growing risks in the industry that are assuming a dimension and complexity that individual companies can no longer manage.

The competitive and regulatory environments surrounding nuclear power have changed dramatically since its early days. 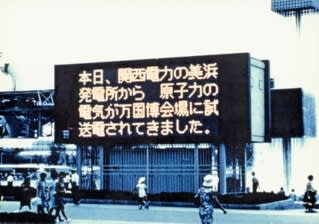 An electric bulletin board at the 1970 Osaka Expo site announced the reception of electricity from Kansai Electric Power's Mihama nuclear power plant.

On Aug. 8, 1970, an electric bulletin board at the site of the Expo '70 world fair in Osaka proudly announced the site was powered by electricity produced at Kansai Electric Power's Mihama nuclear plant. It was a successful test of power transmission from the plant in Fukui Prefecture, over 200km away.

The No. 1 reactor at Mihama, the nation's first pressure water reactor to operate commercially, had a capacity of 340 megawatts and was built by U.S. company Westinghouse Electric, or WH, and Mitsubishi Atomic Power Industries -- now Mitsubishi Heavy Industries.

When Kansai Electric, which supplies power to the region around Osaka, started the construction of the Mihama No. 1 reactor in 1967, it seemed the future of energy lay in nuclear power.

"We were proud of the fact that electricity generated at nuclear plants in Tsuruga and Mihama was powering the expo," recalls an official of a local chamber of commerce and industry in the prefecture, which is home to a cluster of nuclear plants.

In 1971, General Electric's boiling water reactor started operation as the No. 1 unit at the Fukushima Daiichi nuclear power plant, operated by Tokyo Electric Power. Toshiba built the No. 3 reactor at the plant in cooperation with GE, while Hitachi supplied the No. 4 unit, also with the help of the U.S. maker.

The oil crises of the 1970's triggered a boom in the construction of nuclear power plants in Japan. Electricity providers began to expand nuclear power generation fully in line with the government's energy policy. Manufacturers of nuclear equipment were also integrated into the nation's nuclear power ecosystem, which was underpinned by substantial policy support from the government.

A major turning point in the history of Japanese nuclear power came in 2006, when Toshiba acquired WH.

By that time, the West had turned its back on nuclear power generation after the Three Mile Island and Chernobyl disasters.

But a growing number of emerging countries were embracing atomic energy to meet surging demand for electricity amid rapid growth.

More than a dozen groups vied for WH, including GE, Mitsubishi Heavy and certain South Korean companies before Toshiba clinched the deal.

Atsutoshi Nishida, Toshiba's president at the time, saw WH as a powerful springboard for overseas expansion of the company's nuclear power business and decided to raise the stakes. Competition for the U.S. nuclear equipment maker boiled down to a showdown between Toshiba and Mitsubishi Heavy, which had considered WH as something of a mentor ever since their partnership on the Mihama No. 1 reactor.

Toshiba won out by offering $5.4 billion and the acquisition prompted Hitachi and Mitsubishi Heavy to seek alliances with GE and France's Areva.

China and South Korea had developed their own nuclear power technology and emerged as new competitors.

Russia and China tried to boost their shares in the market through government-backed sales drives, supported by public funding. Makers in Japan, the U.S. and Europe faced fierce competition from these countries, which offered comprehensive deals including operation and maintenance services.

The 2011 Fukushima nuclear disaster delivered a devastating blow to the industry. Following the accident, all of Japan's nuclear reactors were shut down.

Many countries tightened safety standards, putting an additional burden on makers. Germany decided to phase out nuclear power altogether. Stricter nuclear safety regulations in the U.S. are believed to have been a factor behind the losses at WH.

The Japanese government, however, decided to press ahead with nuclear power as a key source in its new energy supply plan unveiled in 2015, which called for a 20-22% share for atomic energy in the nation's overall supply in 2030.

Nuclear power is vital for achieving Japan's goal of reducing greenhouse gas emissions to 26% below the levels in 2013 by 2030. Tokyo has promised the international community it will meet its target.

Nuclear power generation is also the cheapest method of producing electricity. But major accidents inevitably cause enormous damage, putting the very survival of the plant operator at risk.

Even though Japan still needs to maintain nuclear power generation, the Fukushima disaster has underscored the grim fact that the risks involved are too large and complicated for individual companies to assume and manage.

Tokyo Electric Power Co. Holdings, which is under state control, has decided to expand cooperation with other companies.

A wave of consolidations is now rolling through Japan's electric power industry, with huge implications for manufacturers as well as utilities.

The newest nuclear reactor in Japan is the No. 3 unit at Hokkaido Electric Power's Tomari nuclear power plant, which came on stream in 2009. It was built by Mitsubishi Heavy.

The last time Toshiba and Hitachi built new reactors was in 2005 and 2006, respectively.

The three companies are currently busy helping utilities with their efforts to restart reactors. They are also involved in operations related to decommissioning aging reactors.

"Maintaining nuclear power technology is difficult unless new reactors are built," warns Mizuho Bank's Tamura. "It is vital for the makers to hand down experience and expertise while memories of the Tomari reactor are alive."

Even if nuclear power is treated as a transitional energy source, makers have to continue ensuring safety. The option of withdrawing from the business simply does not exist.

In March 2015, Kansai Electric Power decided to decommission the No. 1 reactor at its Mihama plant. In the same year, WH bought CB&I Stone & Webster, a U.S. nuclear plant construction company.

The acquisition has left Toshiba with a source of seemingly endless losses, pushing the Japanese company to the brink of collapse.

Speaking at a press conference at the company's Tokyo headquarters, Toshiba President Satoshi Tsunakawa said costs that were not foreseen at the time of the purchase have now come to light. As a result, "the acquisition has failed to boost the efficiency of the business as we had expected," he said.

Ironically, Toshiba's disastrous move came just as the WH-made reactor, which ushered in the era of nuclear power in Japan, was reaching the end of its commercial life.

The government, utilities and nuclear equipment makers can no longer afford the current distribution of roles and risks if they are to overcome the challenges posed by a much harsher business environment.