Ratio of foreign shareholders soars to 70% after huge capital increase 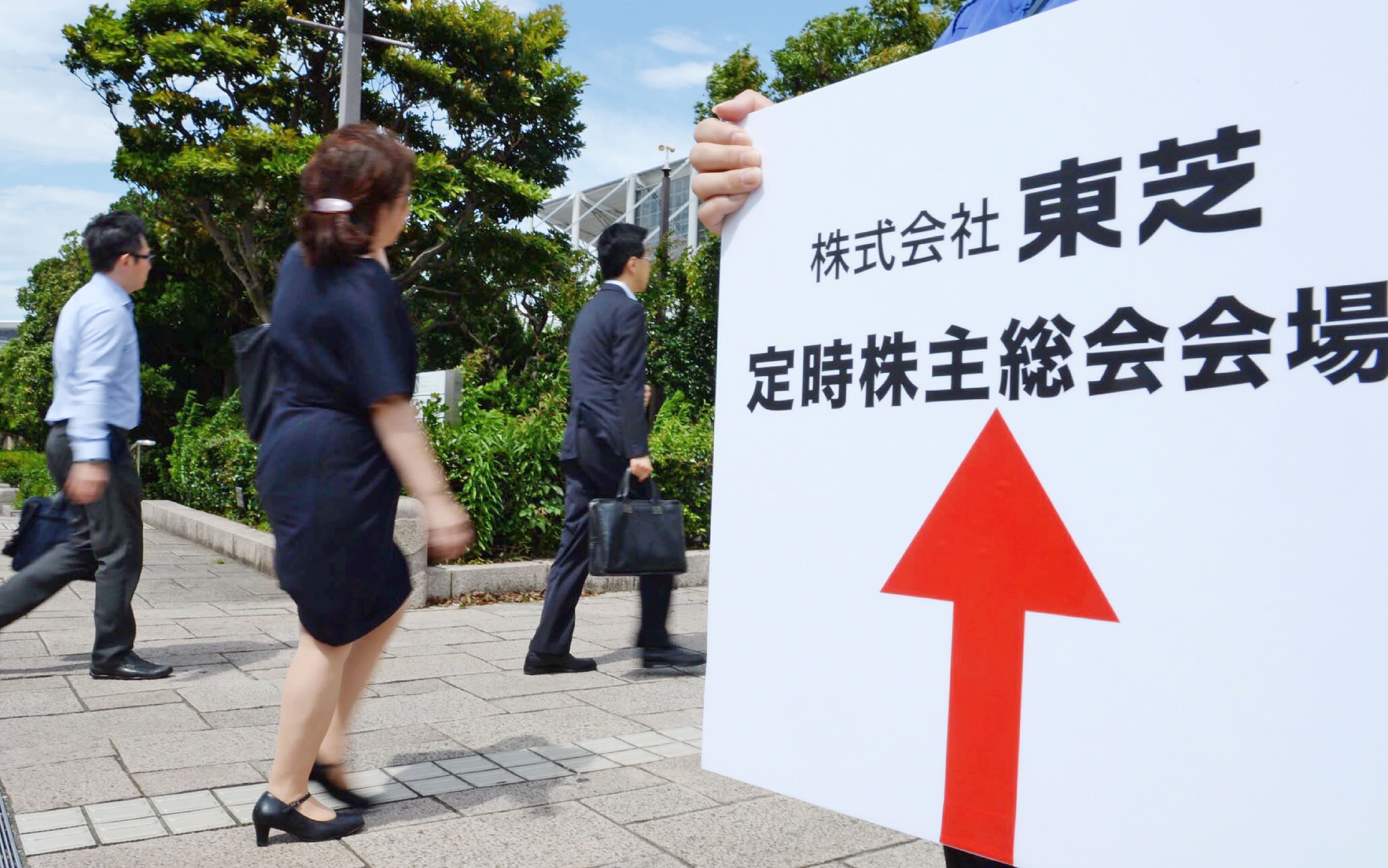 TOKYO -- Toshiba's general shareholders meeting on June 27 was held under mounting pressure to adopt a "globally oriented" management style, given that overseas shareholders now account for 70% of the total since a huge capital increase last December.

But the Japanese conglomerate faces the dilemma of working out a coherent growth strategy following the sale of its lucrative flash memory unit for 2 trillion yen ($18 billion), making the company more oriented toward the domestic market.

This is the challenge that Chairman and CEO Nobuaki Kurumatani and other members of Toshiba's new management team face in trying to rejuvenate the maker of integrated electronic and electrical equipment.

The recent shareholders meeting began with an apology by Toshiba President Satoshi Tsunakawa.

"Although we have put an end to liabilities of excess of assets, we are still in negative territory for retained earnings available for dividend payments, and so will forgo a year-end dividend," he said. "We deeply apologize to you anew."

Toshiba's management was bitterly criticized at the general shareholders meeting last year, when the company was preoccupied with addressing huge losses at its U.S. nuclear power generation business.

There were fewer angry shouts from shareholders at the meeting that just ended. There was even a burst of applause when a shareholder praised management, saying: "I would like to thank you for your efforts to cope with scandals over a long period of time."

The meeting ended in two hours and six minutes, just over half the length of the longest extraordinary meeting in 2017.

At the end of last year, Toshiba raised $5.44 billion by issuing new shares to avoid being delisted from the Tokyo Stock Exchange. As a result, the ratio of overseas shareholders jumped to 70% from just under 40% at the end of the fiscal year through March 2017.

Now that Toshiba has overcome its financial crisis with the sale of Toshiba Memory, shareholders are paying keen attention to how the new management plans to ensure the company's survival.

Farallon Capital wants a stronger say in how Toshiba is managed, in other words

Toshiba is not in a ready position to come up with a viable growth strategy. In the fiscal year through March 2015, the company chalked up nearly 60% of its sales in overseas markets. But that has since dropped to just over 40% with its withdrawal from the memory chip and overseas nuclear power businesses.

Toshiba has returned to its level of operations in the 2004 fiscal year, just before the late Atsutoshi Nishida became president with an agenda to spearhead globalization of the company.

The infrastructure business that Toshiba still holds carries out work for local governments and other domestic clients, earning less than 30% of its sales abroad. Earnings come from management of water, highway and broadcasting systems, among other things, underpinned mainly by domestic demand.

While overseas mergers and acquisitions might offer solutions, Toshiba is under intense scrutiny, both internally and from investors, as a result of a series of deals that turned out unsuccessfully. At the shareholders meeting that just ended, Kurumatani had little choice but to say the company would "carefully address M&As."

Another Japanese conglomerate, Hitachi, as well as Germany's Siemens, may offer tips for Toshiba's rehabilitation. Both have rebounded from financial crises through a path of bold structural reforms.

General Electric of the U.S. is also making all-out efforts to turn itself around. These include spinning off its health care unit to focus resources on globally competitive operations.

But Toshiba has no segment that can be the core of its management strategy. Toshiba "has pulled out of a crisis, but its future is uncertain," said a shareholder in his 80s after the recent meeting.

All of the board appointments approved at the meeting, including Kurumatani and 11 others, including three new ones, were Japanese. Hitachi, on the other hand, has four foreigners on its 12-member board, making Toshiba appear much more domestically oriented.

To win the trust of the foreign investors who dominate its share ownership, Toshiba needs to globalize both its business strategy and its internal structure, including top management.