TOKYO -- More than 5,000 people around the world have died in the latest outbreak of Ebola, with many more expected to succumb to the disease.

The antiviral drug Avigan, which was developed by midsize Japanese pharmaceutical company Toyama Chemical, may become an effective treatment for the deadly disease. 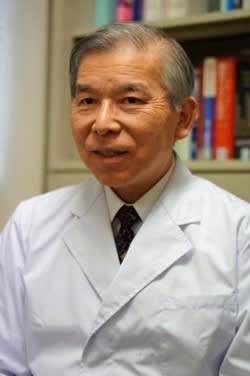 The development of the drug was launched a quarter century ago with the help of Kimiyasu Shiraki, a professor in the medical and pharmaceutical research section of the University of Toyama, who at the time hoped to create an entirely new type of antiviral drug.

Avigan is unique in that it inhibits viral gene replication within infected cells, thus preventing propagation by directly interfering with the proliferation of viral genes. In contrast, other influenza drugs such as Tamiflu and Relenza, are designed to reduce the amount of virus within the patient's body by inhibiting the release of new viral particles.

Shiraki noted that the drug was also expected to be effective in fighting similar types of virus such as Ebola, polio, measles and yellow fever.

In 1990, Toyama Chemical launched research into antiviral drugs. The drugmaker already had expertise in bacterial infectious diseases, and it thought that treatments for virus-derived infections could become a profitable business as well.

However, researchers at Toyama Chemical lacked knowhow on viral infection treatments. So they consulted Shiraki, who had a wealth of experience in creating antiviral therapeutic agents.

They began by testing every chemical compound the firm held to see if they could find a cure for herpes, a disease that causes blisters on the lips and inflammation of the cornea, among other conditions. They tested more than 20,000 compounds in total.

But they could not find a compound that was better than existing ones, despite the thousands of animal studies they conducted.

In 1997, the researchers modified this strategy and began pursuing new drugs to cure diseases caused by combinations of viruses. The change of approach paid off, and a year later, they discovered a new compound that could be effective in treating influenza. They presented the results at an academic meeting in 2000.

Toyama Chemical expected to easily find a bigger drugmaker that would help it refine the research results, but none were interested, because the market of antiviral agents is significantly limited.

Antiviral treatments are used only for the relatively short time in which the virus develops. Therefore, they are used for far fewer patients compared to vaccines, which are given to healthy people.

What was worse, Swiss drugmaker Roche had released a rival influenza drug, Tamiflu, in 1999, which forced Toyama Chemical to shelve the project. In August 2002, Toyama Chemical and Taisho Pharmaceutical announced an agreement to form a capital and business alliance.

Things turned for the better for Toyama Chemical in 2003, when the U.S. National Institute of Allergy and Infectious Diseases started looking for drugs to treat virulent strains of influenza. NIAID is a unit of the National Institutes of Health that conducts and supports basic and applied research on infectious, immunologic and allergic diseases.

In 2006, scientists at NIAID reported that Avigan might be the only effective treatment of a new strain of influenza among 3,000 medicines and trial compounds that had been tested around the world. Hearing this, Toyama Chemical decided to restart development of the drug.

In 2008, the firm was acquired by Fujifilm Holdings, which encouraged it to pursue the research, in hopes that Avigan could be effective against other viruses besides influenza. However, development did not progress smoothly. During animal trials, the drug was found to be teratogenic, causing deformities in fetuses. And it was less effective than Tamiflu.

But Toyama Chemical's researchers did not give up. It took an unusually long time -- three years -- from its application in 2011 to its approval in April by Japan's Pharmaceuticals and Medical Devices Agency, working with the Ministry of Health, Labor and Welfare. New drugs usually receive approval in about a year.

However, despite the approval, Avigan could not find a market due to its relatively low efficacy compared to Tamiflu and the danger of birth defects. Marketing of the drug was put on hold.

According to Ryota Asada, chief of the division of research promotion at the National Hospital Organization Nagoya Medical Center, the PMDA might have granted conditional approval to Avigan, because it needed an effective weapon against new strains of influenza, against which Avigan was expected to be effective.

When Ebola began to spread in West Africa this summer, Avigan caught the attention of medical staff in the West, who were deeply concerned about the lack of effective treatments.

In September, the first patient to be treated with Avigan, a French nurse, was discharged from hospital. Guinea plans to launch clinical trials of Avigan soon, with results expected by February 2015.