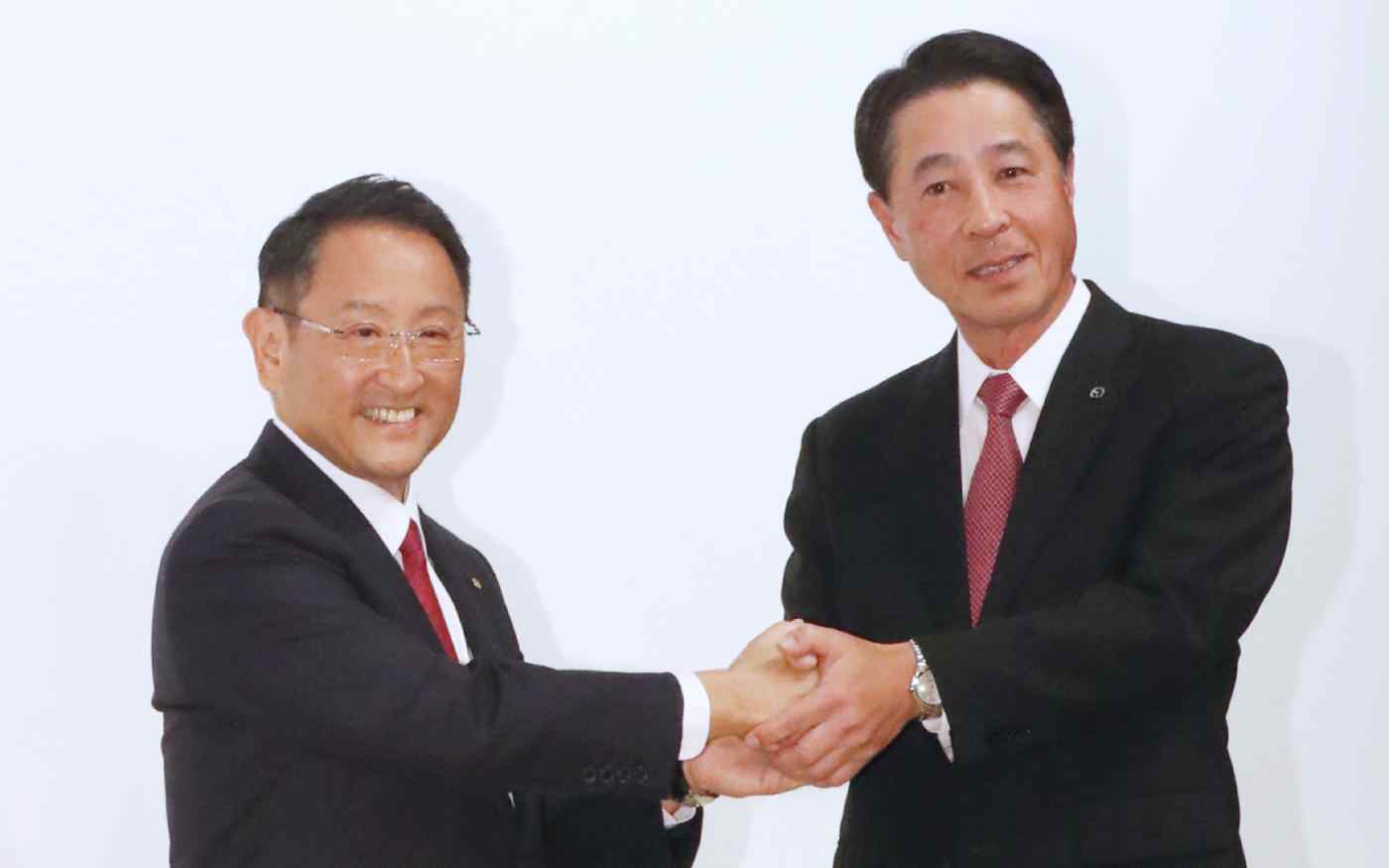 TOKYO -- Toyota Motor and Mazda Motor's business and capital tie-up comes as technological innovation and competition drive the sector's biggest shift since Ford Motor started churning out the Model T more than a century ago.

A sense of urgency in the industry underpinned the words of Toyota President Akio Toyoda and Mazda counterpart Masamichi Kogai at a joint news conference Friday about the newly deepened partnership.

With new players like Google, Apple and Amazon.com emerging, automakers are in for a "fight unlike any before," said Toyoda, who expressed a desire for cars not to become "commodities."

Advances in artificial intelligence and communications technology have ushered in dramatic change, with such innovations as autonomous driving, electric cars, internet-connected cars and ride-hailing services.

After a recent test drive of an electrified Toyota 86 sports coupe, Toyoda had remarked that it was an electric car. His drift was that unlike conventional vehicles, electrics all drive similarly.

Toyoda said that both Toyota and Mazda loved cars and wanted to infuse even the electric vehicles they co-develop with the distinctiveness their brands have spent years cultivating. Such shared values drew Toyota and Mazda together.

Toyota and Mazda decided on a capital link because they wanted to build a "relationship of continuous cooperation" while respecting each other's autonomy and "sharpening each other through friendly rivalry," Toyoda said.

When the automakers joined hands in May 2015, Toyoda had said his company was not a wallet. Now, pressed by changing circumstances, each partner will acquire 50 billion yen ($451 million) of the other's shares, amounting to a 5.05% stake in Mazda and 0.25% of Toyota. They plan to put the funds toward building a new U.S. plant together.

Toyota holds stakes in a number of automakers, including Subaru and Isuzu Motors, but its deal with Mazda in which each company holds the same amount in the other marks an unusual step. Toyota has learned important lessons about operations from Mazda over their two years as partners.

In May 2016, a Toyota official told an audience of parts suppliers that Toyota had grown too big and that Mazda thought carefully about how to get by without money. The lesson was reflected in a new corporate structure with different business divisions for different types of vehicles.

On electric vehicles, Mazda's Kogai said the future was hard to predict but the companies needed to be able to "respond flexibly to change." He said he aimed to "thoroughly prepare" via the partnership.

The tie-up is highly significant for Mazda as well. Its fiscal 2017 research and development budget of roughly 140 billion yen amounts to roughly 13% of Toyota's. Mazda simply cannot stay competitive on its own in developing technology across critical fields, including electrification, safety, internet connectivity and its specialty of engines. Know-how from Toyota in such areas as hybrids will equip it better to respond to the global shift toward electric vehicles.

Gaining a foothold in North America is also critical. At present, Mazda has no plants on the continent beyond Mexico. The annual sales growth of 50,000 vehicles in its medium-term management plan would render its output capacity insufficient by the first half of 2020. Mazda is putting more energy into sport utility vehicles, and by producing them at the joint U.S. plant with Toyota, it would boost its worldwide supply power.