Toyota Kirloskar's plant outside Bangalore: The Toyota unit aims to roll out plug-in vehicles in the state of Andhra Pradesh.   © Reuters

NEW DELHI -- India wants electric cars to rule its roads by 2030, and Toyota Motor is positioning itself to be a major player in the shift.

Toyota Kirloskar Motor, the Indian arm of the Japanese giant, on Thursday signed a memorandum of understanding with the government of the southern state of Andhra Pradesh. Together, they will explore the feasibility of rolling out plug-in vehicles in the city of Amaravathi.

"The MoU is the commitment of Toyota and [the state government] to mutually work together to solve the grave issue of pollution, ensuring the smooth introduction of plug-in hybrid and electric vehicles in the state," Toyota Kirloskar said in a statement, adding that the move is in line with Toyota's Environment Challenge 2050 program for eliminating carbon dioxide emissions. 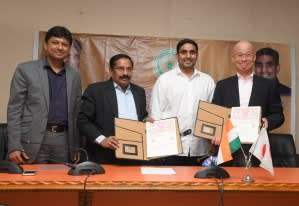 "We will continue our efforts to bring in the best technologies toward solving the national issues of rising pollution and fuel imports, with the right direction from government," Tachibana said.

Global automakers like Toyota see a huge opening to sell electric cars to India's 1.3 billion people. New Delhi wants auto sales to be all electric by 2030.

Andhra Pradesh has been trumpeting the cause of late. Recently, it held a meeting to invite suggestions on how to increase manufacturing and use of electrics in the state.

Nara Lokesh, the IT minister for Andhra Pradesh, attended the Toyota signing ceremony in Amaravathi and said the state will "experimentally try 10 [of the] latest electric vehicles, which will be delivered between May and December 2018," according to a separate government statement.

Lokesh stressed that the state aims to be a hub for an Indian electric vehicle ecosystem. It is working to craft a comprehensive electric vehicle policy and install the necessary charging infrastructure.

The state is already home to automakers such as Isuzu Motors of Japan and domestic motorcycle manufacturer Hero Motocorp.

South Korea's Kia Motors, too, is building a $1.1 billion plant in the state. The 2.5 million-sq.-meter facility, which will have capacity for 300,000 units annually, is due for completion in the second half of 2019. Kia, which announced its entry into India in late April, is a sister company of Hyundai Motor, the second-largest passenger car manufacturer in the country behind Maruti Suzuki India.

Maruti Suzuki, which is majority owned by Japan's Suzuki Motor, also says it will make electric cars. Toyota and Suzuki Motor signed an agreement that covers electric technology on Friday.

Maruti Suzuki Chairman R.C. Bhargava hinted at the implications of the brewing deal late last month. "Suzuki will get the technology [from Toyota] -- and because this company is a Suzuki company, that [technology] automatically comes here," he said.

Bhargava stressed that electric cars will not take over the market right away, given their negligible presence today. "Other cars will continue to sell," the chairman said. "During that period, it would be better to sell as many hybrids as possible to reduce fuel consumption and [pollution]."

In the year ended March 2016, 22,000 electric vehicles were sold in India, according to the Society of Manufacturers of Electric Vehicles. Of those, only 2,000 were four-wheelers -- a tiny fraction of the 3 million passenger cars sold.

The Indian government is eager to change that, to help slash its crude oil import bill and meet its commitment to the Paris climate accord. The country imports about 80% of its crude needs, and costs are projected to double to around $300 billion by 2030. Getting drivers to go electric would make a big difference.

At present, though, Mahindra & Mahindra is the only domestic company already making electric cars. It has teamed up with U.S. automaker Ford to explore product development and expand the e-vehicle market.

Tata Motors has started electric vehicle trials and, alongside Mahindra, has secured a contract to supply such cars to government-run company Energy Efficiency Services.