Toyota keeps the R&D funds flowing despite an earnings dip 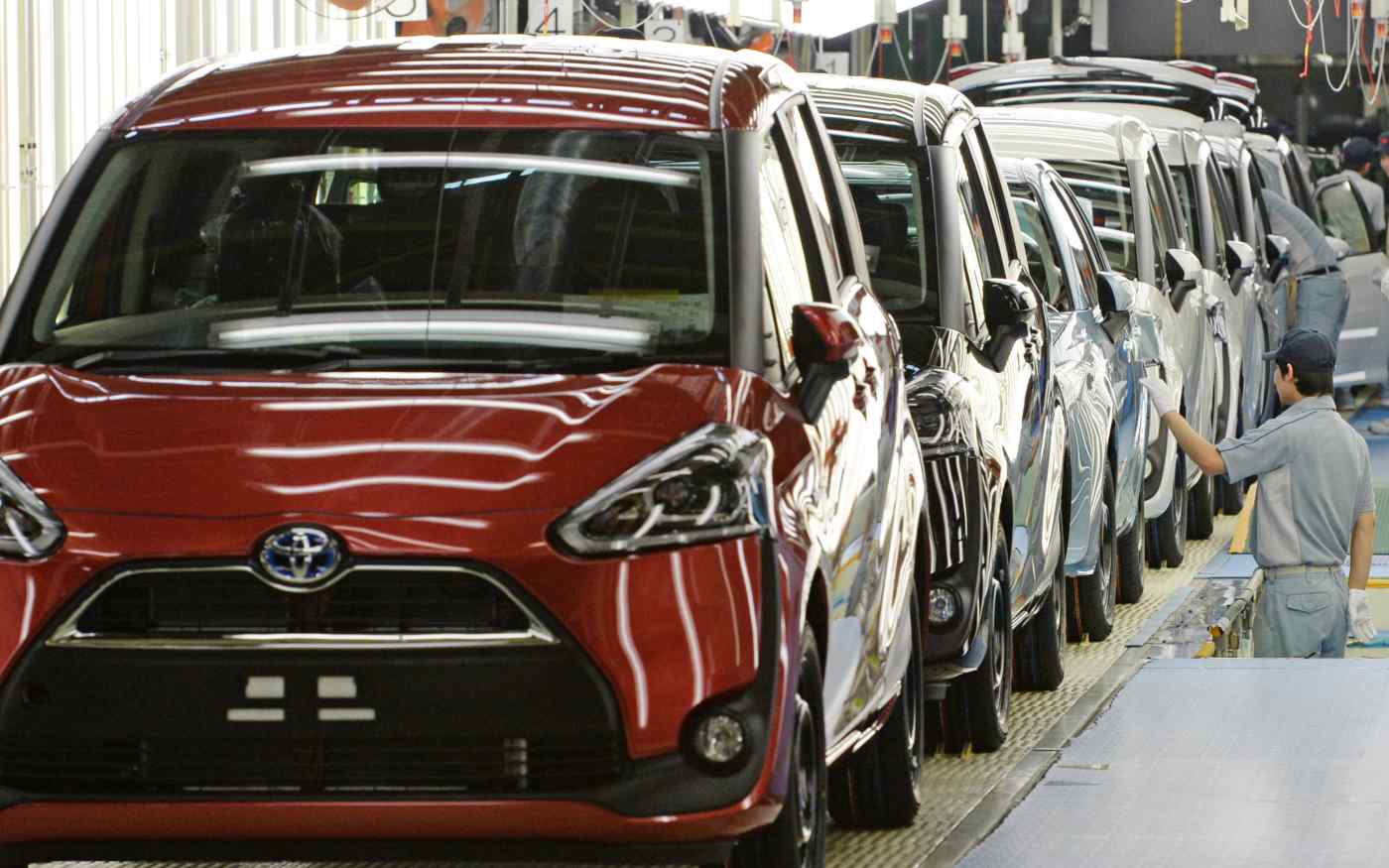 Toyota's factory in Miyagi Prefecture: The automaker does business with 30,000 companies across Japan and cannot afford to fall behind in innovation.
May 18, 2017 10:00 JST | Japan
CopyCopied

NAGOYA, Japan Toyota Motor is continuing to spend heavily on research and development even as earnings decline, aiming to plant the seeds of long-term growth at a time of particularly intense competition for major automakers.

Toyota expects its group operating profit to fall for the second straight year in the 12 months through March 2018, dipping 19.8% to 1.6 trillion yen ($14.1 billion), based primarily on a conservative exchange rate estimate of 105 yen to the dollar. In fiscal 2016, the yen traded at an average of 108 to the greenback. A three-yen appreciation against the dollar would wipe out 110 billion yen from Toyota's operating profit for the current fiscal year, according to its earnings guidance.

Toyota's global sales target for this year is 10.25 million units, almost the same as it achieved in fiscal 2016. The company expects increases in unit sales in Southeast Asia and other regions, but a decrease in its key North American market, where it is forecasting sales to drop by 17,000 to 2.82 million vehicles.

Profit from North America is also expected to decline due to increasing incentive costs as a result of tougher competition. Moreover, rising prices for steel and other materials will likely offset the effects of cost-cutting programs Toyota is working on with suppliers.

For fiscal 2016, Toyota's net profit fell 20.8% to 1.83 trillion yen, breaking a three-year streak of record profits. Sales fell 2.8% on the year to 27.59 trillion yen. It was the first time in five years that both sales and profit slid.

KEY BATTLEFIELD Toyota is one of the world's most efficient automakers, but it faces tough competition in the emerging fields of self-driving technology and smart vehicles. To catch up in those fields, its R&D spending is set to clock in at 1.05 trillion yen, topping a trillion yen for the fourth year in a row.

A look at North America sheds light on the challenges Toyota faces. The continent accounts for one-quarter of its global sales and is a particularly strong market for profitable large vehicles and the high-end Lexus brand. But sales in the U.S., in particular, have fallen short of year-earlier figures for the past four months. While the latest version of the Camry sedan, which sells an average 400,000 units each year in that country, goes on sale this summer, "Sales incentives will increase overall, and competition will intensify," Osamu Nagata, chief financial officer, said on May 10.

On average, automakers offered around $3,500 in incentives on each vehicle sold in the U.S. in April -- 13% more than a year earlier. Toyota managed to keep its figure in the lower-$2,000 range, but replacement demand has subsided in North America, and maintaining strong earnings will prove a challenge. "All automakers hand out incentives in North America, but if vehicles lose value, the industry won't last long," Toyota President Akio Toyoda said.

Making the most of current commitments will play a decisive role in Toyota's future success in the region. "Wherever you go, the auto industry is wide-reaching and involves a vast number of players," Toyoda said. "Once we have decided on an expansion, we consider how we can contribute."

In this vein, Toyota is holding steady on plans to build a plant in Mexico, despite criticism in January from Donald Trump, then president-elect, for the decision. The automaker has since said it will invest $600 million in a plant in the U.S. state of Indiana and $1.3 billion in a Kentucky plant. It has also opened a $150 million research center in the state of Michigan. "Now is the time for us to carefully explain what we are doing" to the U.S. administration, a Toyota executive said. "We can't relax yet."

Just 27% of Toyota vehicles sold in the U.S. in 2016 were imported from Japan, down from nearly 70% in 1990, when the two countries agreed to reduce their trade imbalance under the so-called Structural Impediments Initiative. The automaker now produces 1.33 million vehicles a year in the U.S. and employs 20,000 people -- more than any other Japanese manufacturer. But Trump seems to want a highly visible win on trade, as evidenced by his eagerness to revise the North American Free Trade Agreement and other pacts.

LOOKING AHEAD Toyota's massive R&D outlays are intended to weather what it sees as the coming storm. Toyota will naturally continue trying to improve its manufacturing methods, but the real battle will be over such game-changing technologies as automated driving and electric vehicles, where European and American rivals are focusing their efforts. Even outsiders like Google are entering these arenas.

Falling behind could be disastrous. "If a company of Toyota's size drops into the red, it would put the brakes on growth for a variety of stakeholders," Toyoda said. The automaker does business with 30,000 companies across Japan, which together employ more than 1.4 million workers. "I remember even now the trouble our losses during the [2008 financial crisis] caused," the president said.

Structural reform could help avert such a crisis -- according to Toyoda, the automaker's "No. 1 problem is that it has gotten too big." But addressing that issue will apparently take "a little more time." Toyota's adoption of an in-house company system in April 2016 helped break the automaker down into smaller organizational units and has made decision-making quicker, according to one executive. But the true test of these efforts will be whether Toyota can maintain product quality while cutting prices on key lines, such as small cars, which dealers have said are too pricey.

Meanwhile, Toyoda has let it be known to those around him that ongoing internal friction is preventing Toyota from tackling larger issues. The automaker remains the global leader in terms of profit, anticipating a net 1.5 trillion yen this fiscal year. But a pause in the yen's depreciation and sluggish sales growth are allowing overseas rivals to catch up. Market analysts expect General Motors of the U.S. to log the equivalent of more than 1 trillion yen in net profit in 2017, while Germany's Volkswagen is seen returning to the 1.4 trillion yen level after booking massive expenses related to its emissions scandal in 2016. VW has already dethroned Toyota in unit sales, moving around 10.3 million vehicles last year.

Still, Toyota's goal for now is to "steadily and continuously advance our investment in the future, rather than place top priority on short-term profit," Toyoda said. With planned outlays including 1.3 trillion yen in capital spending, the company aims "to continue planting seeds with an eye toward 10 or even 20 years into the future."