TOKYO -- Inside a Toyota Motor research facility in Changshu, Jiangsu Province, engineers peer intently through their electron microscopes, looking for the next breakthrough in hybrid-vehicle production. 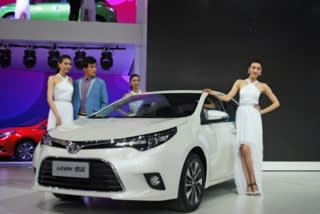 Their work is part of Toyota's initiative to produce hybrid vehicles for the Chinese market locally. The carmaker had long kept production of hybrids inside Japan to prevent the outflow of technology.

The facility, which was fully launched in 2013, is Toyota's first overseas location dedicated to hybrid-vehicle development. It consists of three wings for development and experimentation and a test track. About 60% of its workforce, or some 200 employees, are Chinese, and most of them are engineers.

One of their primary tasks is the qualitative analysis of parts and materials sourced in China, which include magnets, battery parts and gasoline. Toyota is planning to start local assembly of battery chargers in China in 2015, with an eye toward eventually producing motors and inverters using local materials and parts.

In 2013, Toyota became the world's first carmaker with annual global sales topping 10 million units. But though it is setting global records, it trails rivals in China, where it has a market share of less than 5%. With global fuel-efficiency standards expected to grow increasingly stringent toward 2020, Toyota is looking to capitalize on its technological edge in hybrid vehicles to regain ground in the world's largest car market.

Toyota has played a major part in establishing hybrid vehicles as a new eco-car genre in Japan, but that does not necessarily guarantee a similar success in China.

First, it will have to catch up with overseas rivals. Volkswagen plans to start production of plug-in hybrid vehicles in China in 2016. Volkswagen CEO Martin Winterkorn touted hybrid technology at the Beijing International Automotive Exhibition in April, stressing that these vehicles emit no carbon dioxide and have greater range because they are powered by both electricity and gasoline.

Volkswagen and General Motors are accelerating their production and marketing efforts for electric and plug-in hybrid vehicles in China to take advantage of government subsidies. In 2012, the U.S. company began developing batteries for electric vehicles at a research facility outside Shanghai.

The Prius, a core Toyota hybrid brand, sells for around $35,300 in China. Due to its relatively high price, sales there came to just over 1,000 units in 2013. Though hybrids have established a solid footing in Japan, accounting for about 20% of domestic passenger-vehicle sales, China's eco-car market is still nascent, with no dominant category established.

China's subsidy scheme does not cover hybrids, but the country's worsening air pollution has led some government officials to call for their inclusion.

Toyota is set to roll out two affordable, locally made hybrid models in its Corolla line in China in 2015. It also plans to provide production know-how for the core parts used in these models to First Automotive Works and Guangzhou Automobile Group, its joint-venture partners in China. "The entry by other companies will push the Chinese government to include hybrids in the subsidy program," a senior Toyota official said.

Other Japanese automakers are also flexing their marketing muscle in China. Honda Motor -- which, like Toyota, had avoided production in China due to fears of a technology outflow -- recently announced plans to produce hybrids there. Nissan Motor has unveiled an inexpensive compact model targeting the country.

"My vision for our Chinese operations is to increase our annual hybrid sales to the 2 million range," said Yasumori Ihara, Toyota's executive vice president who oversees operations in emerging markets.