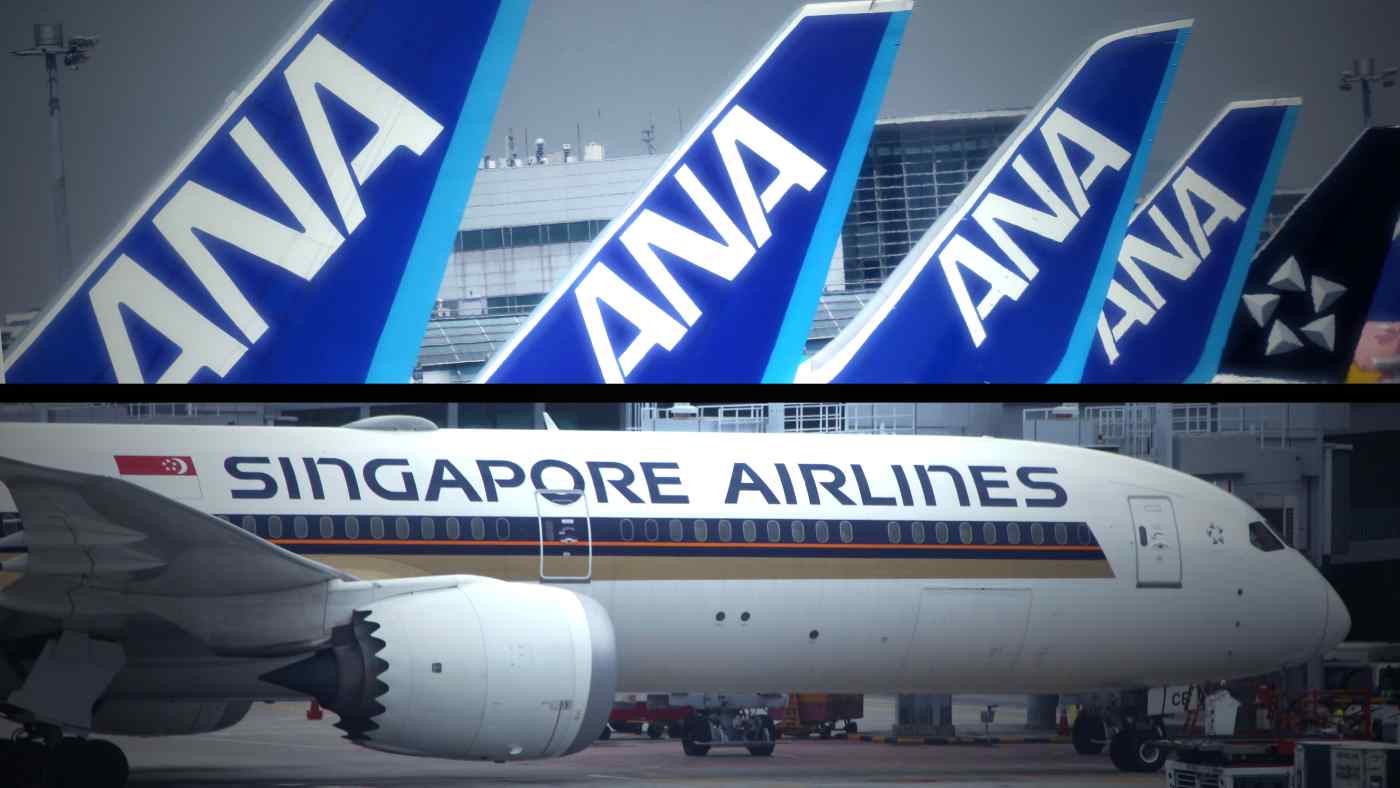 TOKYO/ SINGAPORE -- ANA Holdings and Singapore Airlines had their most torrid quarter between April and June, no thanks to the coronavirus pandemic, the airlines reported on Wednesday.

ANA Holdings made a net loss of 108 billion yen ($1 billion) in the three months to end-June, its worst-ever quarterly results, the Japanese carrier said. Meanwhile, Singapore Airlines reported a net loss of 1.12 billion Singapore dollars ($810 million) for the same period.

The pandemic led to lockdowns and grounded flights throughout the world. For ANA, its quarterly revenue plunged by 75.7% from the previous year to 121.6 billion yen. Singapore Airlines said its revenue dropped 79% on the year to SG$851 million.

The company has so far cut bonuses and pay for management staff, as well as temporarily laying off employees. It has also stopped taking on new graduate employees. Further cost-saving measures include decommissioning old fleets and cutting outsourced work, according to Fukuzawa.

The airline did not disclose its earnings outlook for the full fiscal year, citing uncertainties.

Its domestic flights operation has recovered to about 50% in July, from just 15% in May. "We are expecting recovery in demand for domestic flights as we enter the second quarter," said Fukuzawa. For international flights, however, operation remains low at 10% in July and August.

In the long term, "demand will start to recover, but we will not just wait," said Fukuzawa. "We want to adapt to the changes." He was referring to the change in consumer behavior as travel falls and online communication increases.

The company in April announced that it had secured 950 billion yen in loans and credit lines from financial institutions to weather the coronavirus crisis.

Singapore Airlines' quarterly net loss compared starkly with its SG$111 million profit a year ago, in part also due to fuel hedge losses.

In the January-March quarter, it had already recorded a net loss of SG$732 million as the pandemic began to hit the region.

In a filing to the Singapore Exchange Wednesday, the airline noted the recovery in international air travel is "slower than initially expected," adding that its passenger capacity may reach "less than half of its pre-COVID-19 levels" by the end of the fiscal year ending March 2021.

The company had earlier announced that it would raise up to SG$15 billion through the sale of new shares and convertible bonds, backed by its largest shareholder Temasek Holdings.

According to Wednesday's statement, Singapore Airline will explore "additional means to shore up liquidity as necessary." The company also said it was reviewing the scale of its flight network over the longer term, implying that it could cut fleet size and mix.

The company has grounded over half of its 220 aircraft. Singapore Airlines has been negotiating with aircraft makers over adjustments to the delivery of existing orders and the schedule of payments.

In the exchange filing, the company said it has reached an agreement with Airbus on "some of these matters" and that discussions with Boeing are "ongoing."