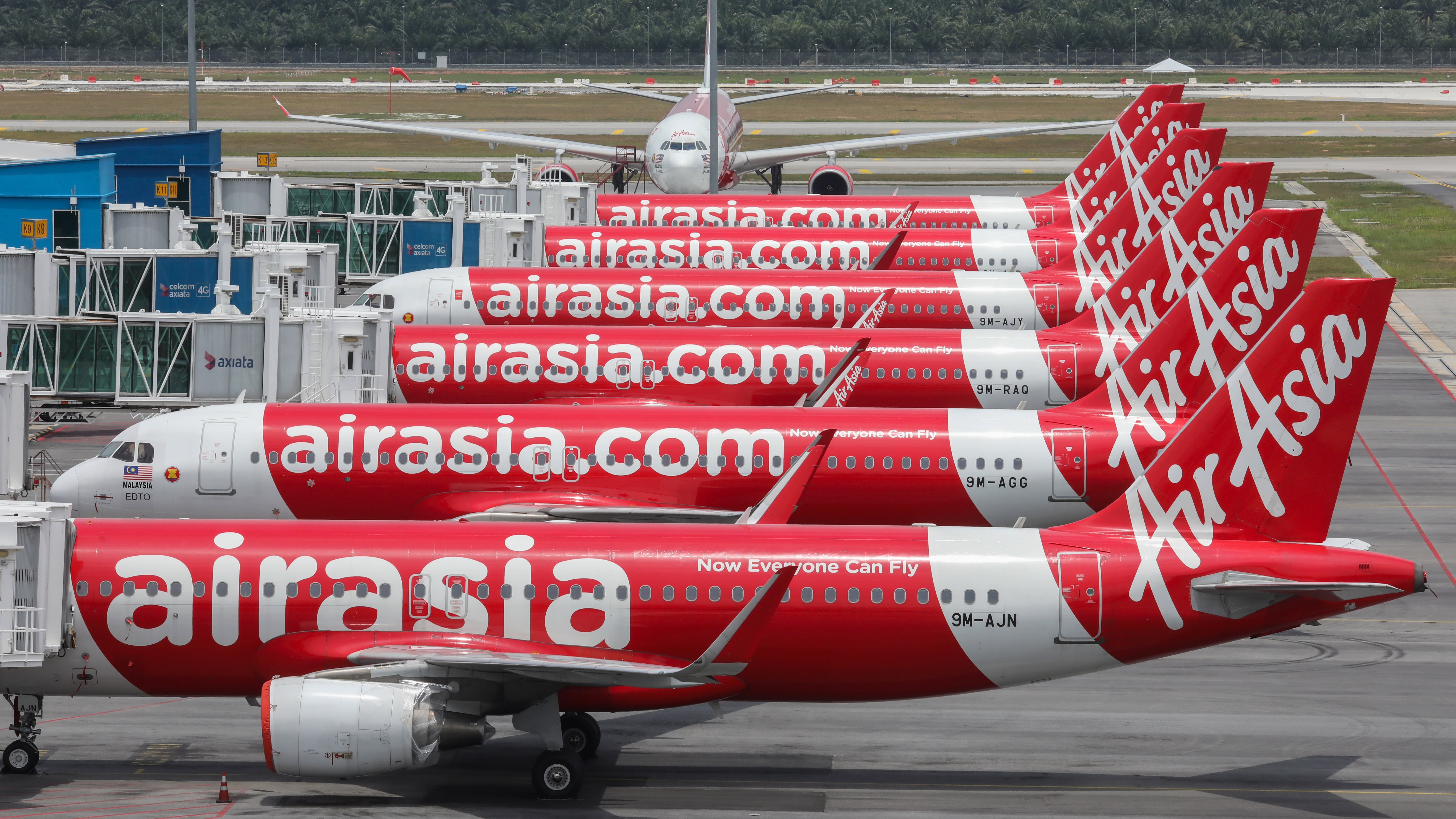 AirAsia pioneered the cut-rate airline model in Southeast Asia with a determination to keep seats filled and its jets in the sky, but new restrictions will likely test this business model.   © Reuters
KENTARO IWAMOTO, Nikkei staff writerAugust 25, 2020 20:27 JST | Malaysia
CopyCopied

SINGAPORE -- Low-cost airlines that contributed a new kind of connectivity to Southeast Asia in the years before COVID-19 find themselves with a little hope now that the strictest pandemic-related restrictions are being wound down but still anxious about their post-pandemic survival.

On Tuesday, Malaysia-based AirAsia announced a net loss of 992 million ringgit ($237 million) for the April-June quarter, falling into the red from a net profit of 17 million ringgit a year earlier. The figure represents the airline's largest loss since 2004 listing.

As Malaysia and other countries were mostly locked down during the quarter, the total passengers AirAsia carried dropped 98% from a year earlier. In addition, its load factor dropped to 59% from 85%.

Quarterly revenue plunged 96% "at the height of the COVID-19 pandemic," the airline said in an exchange filing, adding that 42% of the revenue came from cargo and logistics operations.

Earlier this month, the Philippines' Cebu Air, known as Cebu Pacific, reported a net loss of 7.95 billion pesos ($160 million) in the second quarter, turning red from a 3.78 billion peso net profit a year before.

The carriers' results come as the airline industry is beginning to emerge from the worst of the region's strict travel restrictions and lockdowns, leaving budget airlines to ponder how they might fare in the coming recovery phase.

The low-cost business model, born in the West, allowed Southeast Asian carriers to aggressively create new routes across a region populated by 650 million people, many of whom began reaching the middle class just as the budget airlines began promising cheap vacations.

The new airlines also captured customers who used to travel by long-distance buses and ferries.

Before the pandemic, stiff competition had already taken a toll on the industry's balance sheets, and the coronavirus delivered the final blow to some players. Bangkok-based NokScoot, a joint venture between Nok Airlines and Scoot, in June announced it was liquidating. Last month, Nok Airlines itself announced it would undergo court-supervised rehabilitation. Many budget airlines have taken significant cost-cutting measures, including layoffs.

Now that countries are gradually lifting travel restrictions, budget carriers are beginning to resume flights. Cebu Air took back to the skies in early June. AirAsia said demand picked up in June compared to May and that it carried triple the number of passengers in Malaysia.

AirAsia on Monday announced a partnership with travel booking site Agoda to collaborate on travel bundles and joint product marketing.

On the same day, Scoot said it had started modifying passenger craft so that it can create an alternative revenue stream. It has already removed all of the seats from one of its aircraft to allow for cargo to be carried in the cabin. The measure has allowed the jet to carry twice as much cargo as previously.

Another aircraft is scheduled to undergo a similar modification this week.

But cut-rate airlines' recovery prospects are mixed. On a positive note, industry analysts say, they might be well placed in the recovery phase, relative to full-service carriers, as they are more focused on domestic markets. Moreover, price-sensitive travelers will prefer low-fare airlines amid the ongoing economic downturn. 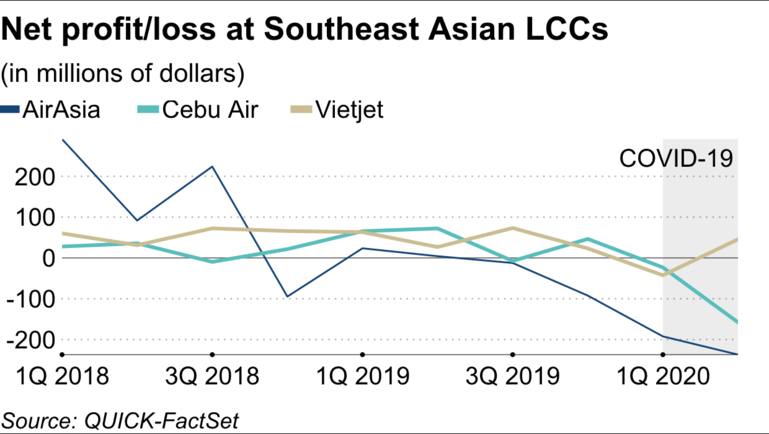 Sustaining the low-cost model, however, will likely be a big challenge. The model is built on optimizing and maximizing aircraft utilization: Keep the seats filled and the planes in the air. But in the recovery phase, a certain number of jetliners will remain grounded, and cabin cleaning procedures will keep the airplanes that are flying on the tarmac longer.

Moreover, for budget flyers that have more international exposure, a big concern is "whether demand from domestic can fully offset the decline in international," an analyst at a major brokerage who did not wish to be named told the Nikkei Asian Review. "If the current situation prolongs, there will definitely be [more] players exiting, as none have sufficient cash buffer to survive over the next six months without a capital call."

With respect to liquidity, AirAsia has applied for bank loans in countries where it operates to help it build working capital and make payments on the jets it leases, according to Malaysian investment bank Kenanga. Analyst Raymond Choo noted in a recent report that "AirAsia has ongoing deliberations that may result in additional third-party investments in specific segments of the group's business."

Cebu Air said in an exchange filing that the company was "confident on its ability to raise cash for liquidity needs [even if it were to incur] unprecedented losses as a result of an expected slow recovery from this crisis." It has negotiated with key suppliers on capital expenditure commitments and related cash flows.

The International Air Travel Association last month projected that global demand for air travel would regain its 2019 level only by 2024, slower than the previous projection of 2023. This year's global passenger numbers are expected to decline 55% compared to 2019, it said.