Choi now owns an 8.96% stake in AirAsia via a private placement last month. He is confident that his corporate resume that includes Hong Kong and China, where he was born, could facilitate securing the needed approvals for what could become AirAsia China.

"AirAsia has been dealing with China for a long time," the Hong Kong-based Choi told Nikkei Asia in a remote interview. "I can add value to that with my know-how and open more gateways for the company."

In a November 2019 interview with Nikkei, Fernandes expressed his hope to establish an airline in China, which he views as friendly to foreign investment. "We have to make sure that we can be relevant in such a huge market," Fernandes said.

At the time, China was already crucial for AirAsia, with the group recording almost 20% of annual sales from Chinese destinations. But the situation has since changed for the worse due to pandemic-driven border closures around the world, which have battered the aviation and tourism sectors the most.

But despite such lofty ambitions, the reality for AirAsia is that not all its foreign ventures have turned out well.

Due to the financial impact of COVID-19, the airline was forced to shut down AirAsia Japan and sell a majority stake in AirAsia India to partner Tata Group. It has also failed three times to set up a joint-venture airline in Vietnam. Besides India, AirAsia currently operates separate entities in Malaysia, Thailand, Indonesia and the Philippines. 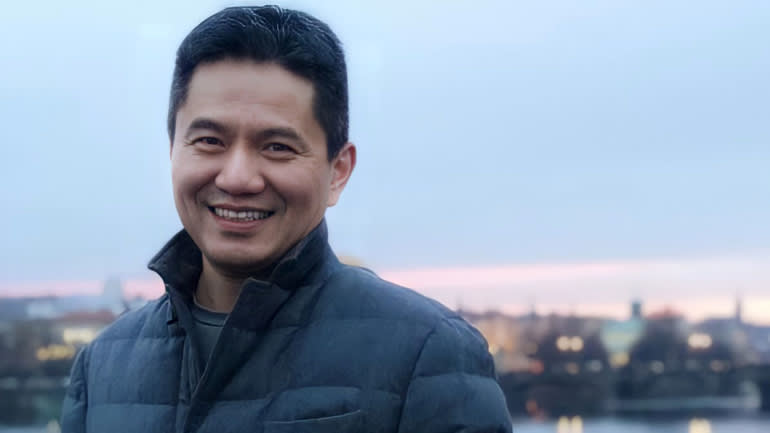 Stanley Choi, who holds a nearly 9% stake in AirAsia, is confident he can use his China connections to help the carrier expand there. (Courtesy of AirAsia Group)

Choi sees great promise in China, where he said the budget airline sector "is still at [the] infancy stage" while there is also a lack of "privately-owned, efficiently-run" airlines. But he stressed that AirAsia has the ability to fill such gaps.

"The Chinese government is also in favor of allowing foreign investment in the aviation sector, which was previously controlled by state-owned companies, and Malaysian companies are also friendly parties to the Chinese government... AirAsia can take advantage of this," Choi said.

"Poker is only my hobby," he said. "I would like to be known as a merger and acquisition specialist with very successful investments."

The Chinese market is also promising as only 15% of the country's 1.4 billion people currently hold passports -- a number that should increase as the middle class grows, he said.

"For lower-income people, a budget airline can provide vast travel opportunities, and that's where AirAsia could step in," he said. "AirAsia can also give healthy competition to existing airlines in China."

Fourth-quarter results are expected this month, but analysts forecast no return to profitability until 2022.

Choi said the investment decision on China must be made by AirAsia's board, chaired by airline co-founder Kamarudin Meranun. Choi also said he does not expect to be appointed as a director with a 9% stake, but would consider joining if requested by the board.

As for timing, he suggested there is no rush.

"I think the first priority is to recover from the downturn and get the financials steady to pre-pandemic levels," he said. "Geographical expansions should only come after that."