Amid pandemic, JAL posts biggest loss of $2.6bn since relisting TOKYO -- Japan Airlines posted a consolidated net loss of 286.6 billion yen ($2.6 billion) for fiscal 2020 on Friday, the biggest yearly loss since it relisted in 2012, amid a sharp decline in passengers due to the coronavirus pandemic.

Although the net loss is the group's biggest ever, it still is 14 billion yen less than the company's forecast in February of a net loss of 300 billion yen.

The group said it has been cutting costs, including scheduling fewer flights and reorganizing its labor force.

Sales dropped 65.3% from the previous year to 481.2 billion yen for the same period as the pandemic weighed on its core airline business.

JAL refrained from forecasting sales for the current fiscal year ending in March amid lingering uncertainties related to COVID-19.

"When aviation demand recovers depends on when vaccine effectiveness will emerge. ... Demand will surely return if vaccination progresses to some extent. We have to be well prepared for it," Yuji Akasaka, JAL's president, told reporters on Friday. But he added, "Unfortunately, I don't know when that will happen." 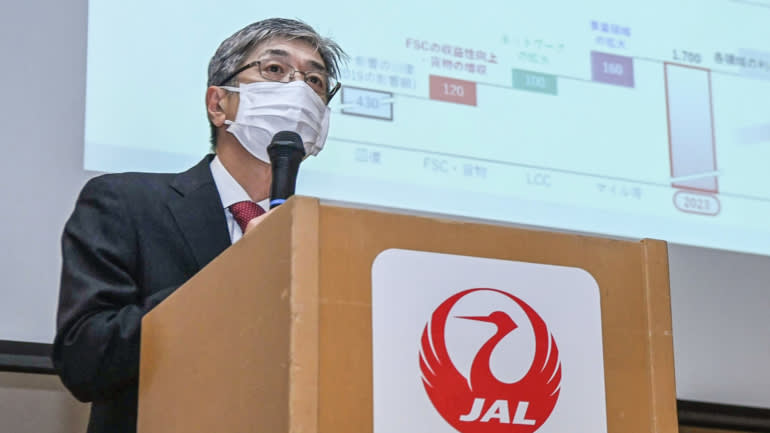 JAL President Yuji Akasaka speaks during a news conference in Tokyo on May 7. (Photo by Arisa Moriyama)

Together with the earnings result, JAL on Friday announced a new midterm financial target of 170 billion yen in EBIT (earnings before interest and taxes) for the next three years. Akasaka said the company "is expected to have recovered from the coronavirus by fiscal 2023." It aims to achieve around 185 billion yen in EBIT in fiscal 2025.

To achieve the target, Akasaka said JAL it would reduce reliance on its full-service carrier business and strengthen growing its LCCs (low-cost carriers) and nonaviation businesses such as its mileage service.

As online meetings have been increasing during the pandemic, some project that demand from business travelers will shrink even after the pandemic. Meanwhile, the LCC market is expected to grow.

To make the company more resilient to pandemics, the group also hopes to strengthen its mileage program and lifestyle sector, including e-commerce and financial services, leveraging its customer base. JAL also plans to expand its market share in contracted services such as cargo. 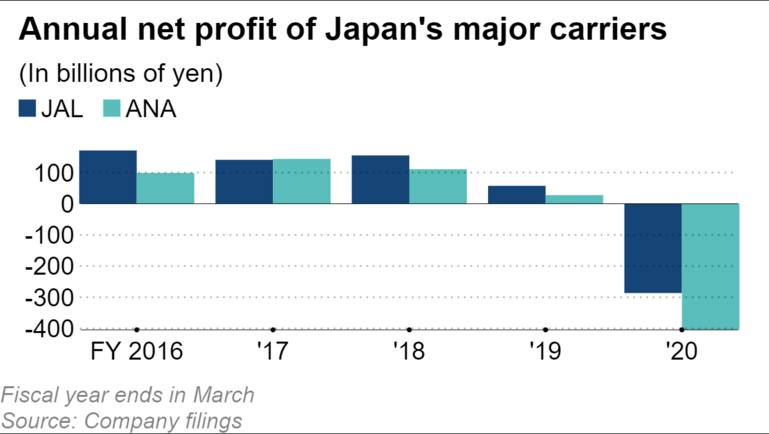 While JAL did not offer a short-term forecast for the current fiscal year and focused on its medium-term strategy, rival ANA revealed more aggressive plan.

ANA last week forecasts net profit of 3.5 billion yen for the current fiscal year after it posted a consolidated net loss of 404.6 billion yen, its largest ever, for the year that ended in March. The company expects to reduce fixed costs by 300 billion yen in fiscal 2021, with a fleet reduction of 25 aircraft by the end of fiscal 2022.

ANA, Japan's largest airline, expects domestic demand to recover from the second quarter of this year and to return to pre-pandemic levels by the end of this fiscal year. For international routes, demand is not expected to return to normal until fiscal 2023.