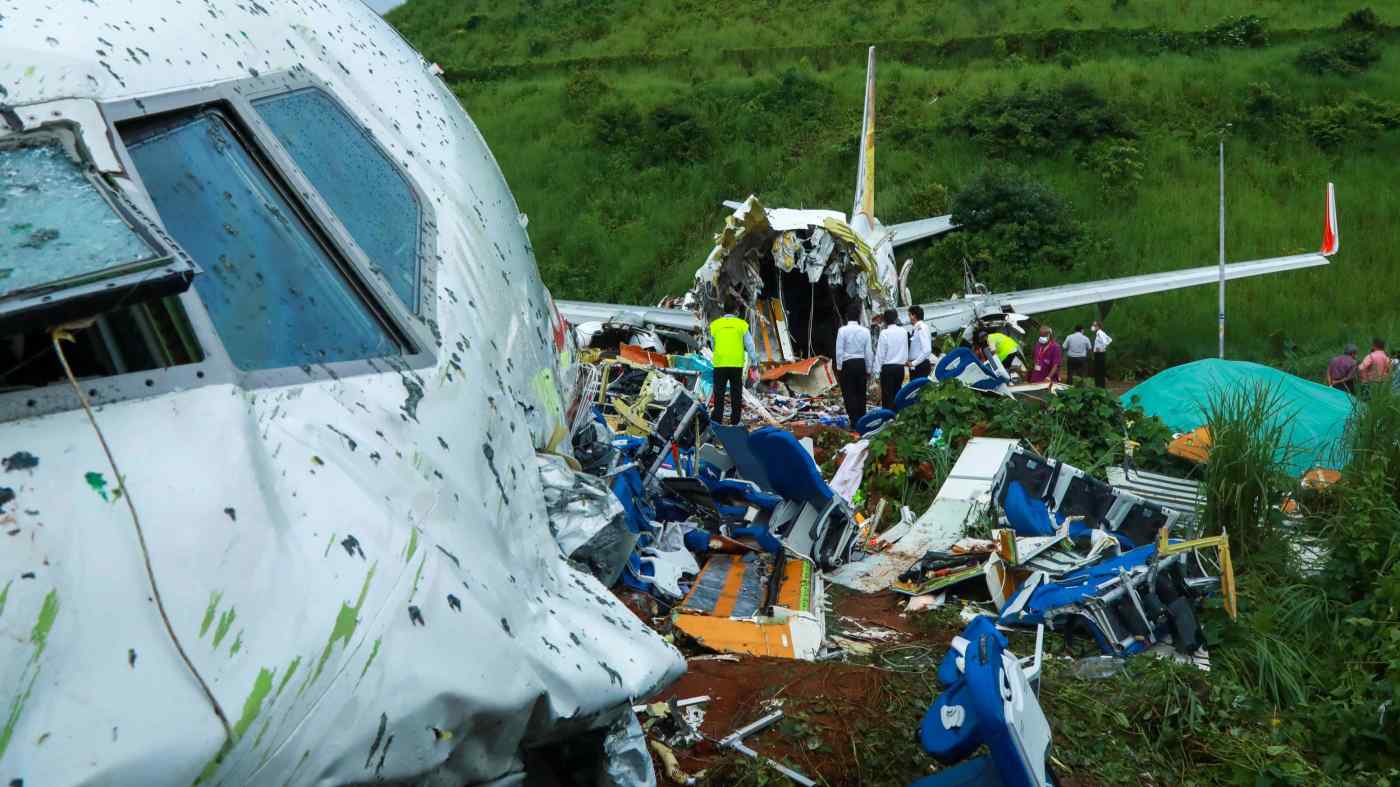 TOKYO -- Despite the reduced air traffic amid the coronavirus pandemic, major air accidents and fatalities are running higher than usual this year, with Asia a major part of the problem.

Asia is the fastest-growing air traffic market, but the growth hasn't been matched by corresponding improvements in safety.

"The problem could have been worse if the coronavirus hadn't reduced air travel," said Hiroshi Sugie, an aviation analyst who was a Japan Airlines pilot for 43 years.

At the core of the problem is a shortage of pilots and other experts. Though the pandemic has temporarily reduced demand for such professionals, the issue remains unresolved for airlines in Asia.

The financial woes caused by the pandemic could worsen the situation as hard-pressed airlines reduce resources for keeping pilots' skills sharp, let alone training new ones. Even before the pandemic, airlines in Asia were under financial pressure amid tough competition. For instance, Air India Express -- an offshoot of national flag carrier Air India -- competes against a number of other low-cost carriers, including IndiGo Airlines, Jet Airways, SpiceJet and GoAir.

On May 22, a Pakistan International Airlines jet crashed near a Karachi airport, killing 97. The pilots were found to have been chatting about the coronavirus and not paying attention to the landing, according to the country's aviation minister. Pakistan also has reported that nearly a third of airline pilots have fake licenses.

"In many cases, pilots are not as proficient as they once were, with many just passing their training," said Geoffrey Thomas, head of the site Airline Ratings.

Within Asia, safety concerns have led the U.S. Federal Aviation Administration to keep Thailand and Malaysia in its Category 2 as not in compliance with the safety standards of the International Civil Aviation Organization, a U.N. body. Airlines in Category 2 countries are not allowed to operate flights to the U.S.

Indonesian airlines had been barred from flying into the European Union between 2007 and 2018 due to safety concerns.

Japan is home to the third-worst aviation accident in history, the crash of a Japan Airlines jet on Aug. 12, 1985, that killed 520. The disaster led to the adoption in the mid-1990s of a "stabilized approach and landing" rule requiring pilots to make their final approach at a constant angle of 3 degrees or take a go-round and try again.

The rule has helped prevent major landing accidents for 25 years. But safety standards have lapsed. In 2018, a Japan Airlines pilot was arrested in the U.K. after being found to be under the influence of alcohol before making a flight to Tokyo. Also in 2018, a pilot with ANA Wings, a subsidiary of ANA Holdings, was unable to fly from Okinawa because he was hung over, causing delays to five flights.

Neither ANA nor JAL made it into the current Airline Ratings list of the top 20 safest airlines. "Both ANA and JAL missed out because of serious issues with pilots and alcohol," said Thomas.

There are two leading causes of fatal accidents: controlled flight into terrain, typically caused by human error; and loss of control in flight, often blamed on malfunctioning equipment such as the Boeing 737 Max's flight-control system. Flight experience and training are vital in preventing malfunctions from turning into major disasters, experts say. 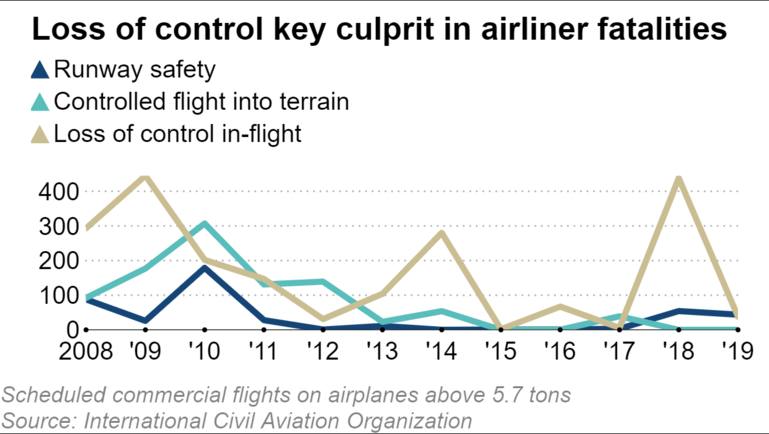 But cost is often a major challenge.

Pilots are typically trained in English-speaking countries with an established aviation industry, such as the U.S., Australia or New Zealand. Japan Airlines and ANA, for instance, each send 50 to 80 recruits to the U.S. for an 18-month training course every year. The cost to train just one pilot is estimated at up to 50 million yen ($470,000).

Pilot shortages are a serious issue in Japan too, with many active pilots on course to reach retirement age around 2030.

As of January 2019, Japan had 517 foreign pilots working for commercial airlines, or 7.8% of the 3,895 total, according to the Japan Civil Aviation Bureau. It is difficult for less well-off countries to attract well-trained pilots from advanced countries, Thomas says.

The pandemic has made pilot training a challenge even in advanced economies because pilots have lost opportunities to fly and keep their skills current.

Across the Asia-Pacific region, air traffic was 43% of the previous year's level in late August, according to data from Cirium, an aviation analytics company. In Japan, domestic air traffic is down about 60% and international air traffic remains at 10% or less. Many pilots of large passenger jets such as the Boeing 777 and 787 now fly only twice or so a month.

U.S. airlines such as Delta and United have dealt with reduced demand by cutting jobs. In Japan, airlines are practicing work-sharing. This is because under aviation law pilots are required to perform three takeoffs and landings during a 90-day period to stay current. Japanese airlines are assigning flights evenly among their pilots so each will have a chance to fly at least once in a while.

ANA spokesman Yuichi Nishiyama, a Boeing 777 captain, acknowledges that flight hours have been reduced but said pilots are doing simulator training to make up for fewer actual flights.

JAL and other airlines also have rules requiring pilots to fly, say, 25 hours per month. Reduced air traffic makes abiding by such a rule more of a challenge.

The problem is not expected to go away soon. Airline executives expect it will take as long as four years for demand to return to the precrisis level, prompting experts to predict that some pilots may have to be assigned to different tasks until demand returns.

Raising public awareness about aviation safety is another challenge. Few air accidents overseas are reported in Japan unless they involve Japanese citizens. 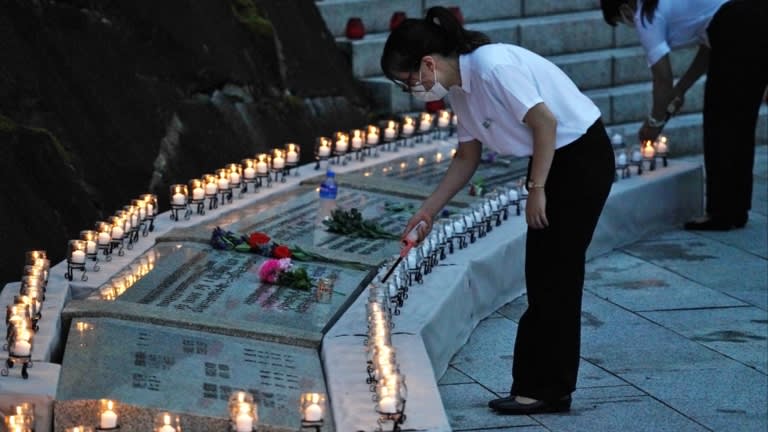 Concern has, however, been voiced by a global professional body, the International Federation of Air Line Pilots' Associations.

Raising public interest in accidents is the first step toward prevention, Sugie said, noting that Boeing's much-maligned 737 Max was also flying in Japan. "Do not think they have nothing to do with you," he said.