Subway system set to double with $9.5bn investment by 2023 BANGKOK -- A city known for traffic gridlock and confusing roads, Bangkok has been trying to improve traffic and the quality of life for its residents by rapidly expanding its rail system.

The Blue Line, Bangkok's first circle line, started operation at the beginning of this month connecting the downtown area with western districts after the completionof a 12-kilometer extensionin the west of the capital.

At Tha Phra Station, the massive X-shaped structure serving the western portion of the Blue Line, service started without a hitch at one of the lower platforms on a recent visit. It took about an hour to travel the entire loop before arriving at one of the station's upper platforms.

Bangkok's railway is set to double to about 300 km in 2023 from the end of last year, making it nearly the same size as Tokyo's subway and one of the largest in Asia excluding China.

It is difficult to attract highly skilled staff if they know that their quality of life would be compromised by traffic jams and air pollution, he said. 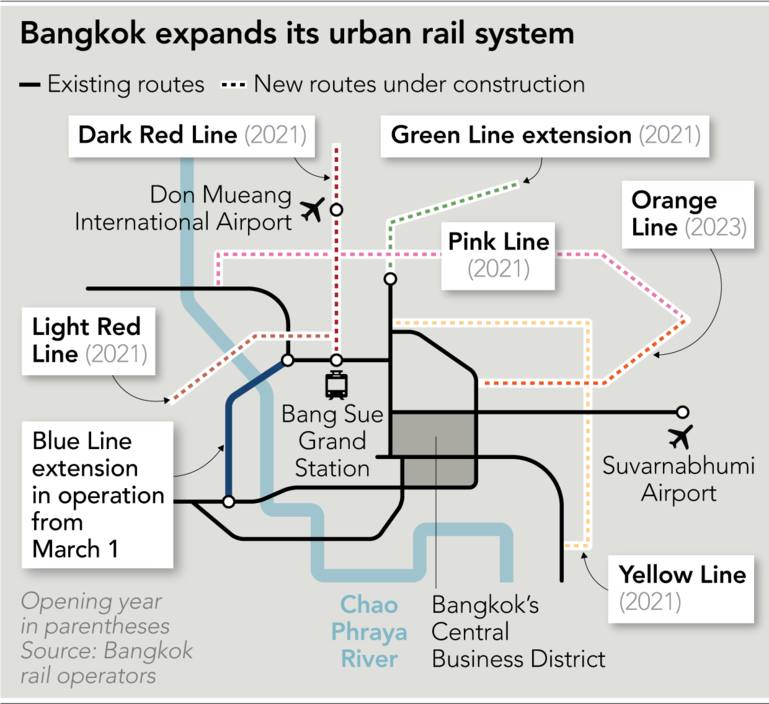 Bangkok is bisected by the Chao Phraya River, which runs south into the Gulf of Thailand. On one side of the river is the city's massive business district that spans the city center to neighborhoods further east. On the western side of the river are residential areas.

Traveling between the eastern and western halves of the city used to be a hassle, but the Blue Line will make it much more convenient now.

The elevated Green Line, which has been in service for roughly two decades, provides a link to the northern part of Bangkok. A 3-km extension to Kasetsart University opened in December.

Kasetsart is one of the country's largest universities with a student population of roughly 60,000. Before the extension, buses were the only public transportation available for commuting to the school. The line has been a hit with students, and an additional extension has been planned for next year.

The Dark Red Line, beginning from Bang Sue Grand Station in the north, is due to launch next year, extending over 26 km. When the entire line is complete, it will connect to Don Mueang and Suvarnabhumi international airports.

"The government wants to gear up and modernize transport systems for all people. We have to fill all major areas with electric trains," Prime Minister Prayuth Chan-ocha said in September. "Traffic problems can be relieved if Bangkok residents, particularly motorists, have more choices to travel, and a rail network should be one of them."

New Delhi, which opened its first subway line in 2002, has seen improvements far faster than Bangkok, with the total route now exceeding 300km. In Thailand, the military government, which took power after the 2014 coup, accelerated the development of urban railways, and expansion finally gained momentum. The rail construction has sparked a flurry of development along the routes, leading to the formation of new city centers in the greater Bangkok area.

"This area used to be a working-class neighborhood, but the streetscape has changed dramatically over the past few years," said a manager at a nearby restaurant.

Another secondary urban center is taking shape in the southeast, thanks to Charoen Pokphand Group. The nation's largest conglomerate poured about 30 billion baht into a mixed-use development that opened near Punnawithi Station.

Sparking this transformation was the Thai government's yearslong mission to reduce traffic congestion. Thailand is Southeast Asia's car manufacturing center, where Japanese automakers dominate. Vehicle ownership has climbed along with the economy.

At the same time, Bangkok has been the scene of disorganized urban sprawl that has left municipal functions concentrated in the downtown area. Roadway construction has failed to keep pace with economic growth. Streets only cover 7% of the city, or less than half that in Tokyo.

As a result, Bangkok, together with Mexico City, was named one of the world's two most congested cities in a 2017 ranking by Dutch digital mapping company TomTom.

However, some economic risk factors have emerged that could undercut infrastructure spending. Because of the trade war, the economy grew only 2.4% last year, the slowest pace since 2014. With the new coronavirus hammering the tourism and manufacturing industries, economic growth may dip below 2% this year.