TOKYO -- Ever since Japan's first high-speed rail link opened in 1964 between Tokyo and Osaka, the idea of using the shinkansen bullet trains for freight transport has been around.

But obtaining land to set up a cargo terminal or creating a carriage specifically for packages required additional cost, and the plans never took off.

Now the idea is finally becoming reality, by simply carrying parcels and passengers in the same carriage. With the nation struggling to secure long-distance truck drivers amid a labor shortage, it suddenly made sense to use the shinkansen's empty seats to carry parcels.

The move sees Sagawa taking a cue from China. As online shopping grows explosively in the country, high-speed trains are being used for same-day deliveries. Sagawa and JR Hokkaido will start testing shinkansen parcel shipping as early as April. 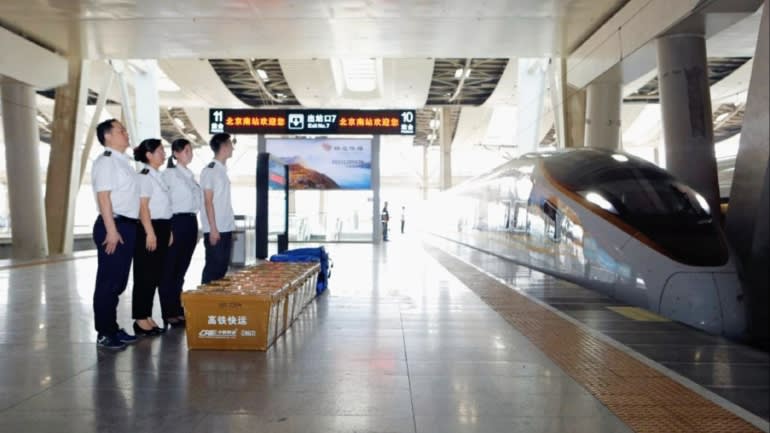 Hokkaido Shinkansen trains, which can top out at 260 km per hour, will make it possible to deliver parcels in the morning of the following day. "We hope to roll out shinkansen-based services in Hokkaido and other parts of the nation," said Kenji Hagiwara, a product planning manager at Sagawa.

The number of home deliveries by courier services hit 4.3 billion in fiscal 2018, a 20% increase in five years due to growing e-commerce, according to Japan's Transport Ministry. But the chronic shortage of drivers could impede further growth. The jobs-to-applicants ratio for vehicle drivers is hovering around three, meaning there are three job offers for each driver hired.

Boston Consulting Group predicts a shortfall of 240,000 truck drivers in Japan for 2027.

Kyushu Railway, also known as JR Kyushu, wants to launch a new shinkansen freight service by 2021. The company, which serves the southernmost main island of Kyushu, plans to use one car of each shinkansen to transport freight during early morning and late night, when there are fewer passengers.

Use of shinkansen to transport home delivery parcels will mostly be relegated to rural lines where seat occupancy is low. This business may not be feasible for the Tokaido Shinkansen Line -- the busiest and most profitable shinkansen -- linking Tokyo, Nagoya and Osaka.

A major Japanese business organization, however, foresees a lucrative future for high-speed rail freight. In February 2019, the Japan Association of Corporate Executives proposed using the high-speed trains for upgrading Japan's logistics network. When the new Chuo Shinkansen maglev train service starts, there will be ample room for freight on the Tokaido Shinkansen Line, the group said.

In China's huge online shopping sector, high-seed trains are already transporting packages. JD.com, a major Chinese e-commerce company, started using the trains to transport parcels in 2017. The company's high-speed rail transport service connects to Beijing, Shanghai, Guangzhou and other major cities, and can be used for perishables such as crabs and cherries, according to the company. 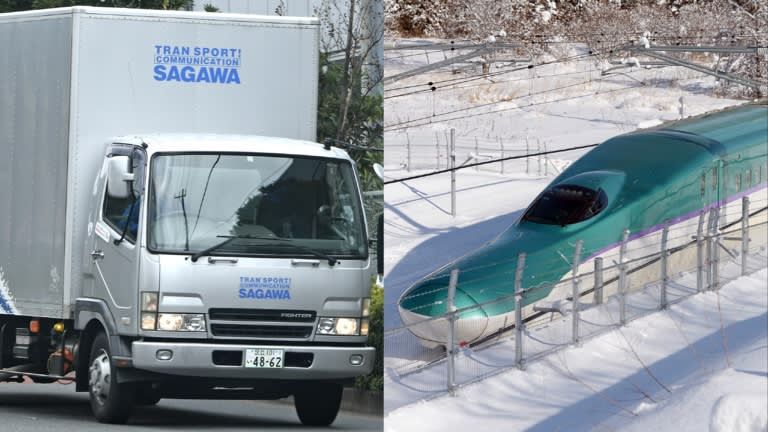 Japan's high-speed trains are faster and less vulnerable to inclement weather than trucks, however transport costs are much higher.

As tremendous amounts of goods purchased online are transported daily across China, it is not unusual to see seats on high-speed trains loaded with parcels, according to a leading e-commerce company.

In Japan, the shinkansen network is expected to be extended in the Hokkaido, Kyushu and Hokuriku regions. But costs remain a major challenge for shinkansen-based deliveries. Sagawa admits as much, saying that using shinkansen for freight will be considerably costlier than traditional trucking services.

The Kagoshima Trucking Association, an industry organization in Kyushu, estimated in 2018 that using shinkansen to carry packages between Kagoshima-Chuo Station and Shin-Osaka Station would cost 70% to 490% more than trucks.

People would likely have priority over packages, adding to the problems of shipping freight in passenger trains, especially during peak travel periods. Moreover, demand for home delivery is subject to wild swings.

Even so, shinkansen trains, which are less vulnerable to inclement weather than trucks, can offer an attractive alternative to trucking.

In addition to providing a way to overcome the driver shortage, freight shinkansen trains could also create a new market for super-rush delivery services targeting businesses.