Cathay, a unit of Swire Pacific -- which, in turn, is controlled by Britain's Swire family -- has been in Chinese crosshairs for its initial hesitancy to act against staff involvement in the continuing anti-government demonstrations in Hong Kong.

"There is no doubt that our reputation and brand are under immense pressure and this pressure has been building for some weeks, particularly in the all-important market of mainland China," Hogg said in a note to staff Friday on behalf of himself and Paul Loo, who resigned as chief customer and commercial officer.

"Paul and I, as the most senior members of the leadership team, have been at the forefront of this crisis and must take responsibility for the way it has been managed," Hogg wrote. "Now is the time for swift and decisive action to restore the trust and confidence of all our stakeholders in Cathay Pacific."

The company said that Augustus Tang, a former Cathay executive who has been serving as chief executive of Swire's Hong Kong Aircraft Engineering unit, would succeed Hogg. Ronald Lam, who became chief executive of budget carrier Hong Kong Express when Cathay took control of it last month, will take on additional duties as Loo's replacement.

"Recent events have called into question Cathay Pacific's commitment to flight safety and security and put our reputation and brand under pressure," Chairman John Slosar said in a statement Friday. "We therefore think it is time to put a new management team in place who can reset confidence and lead the airline to new heights." 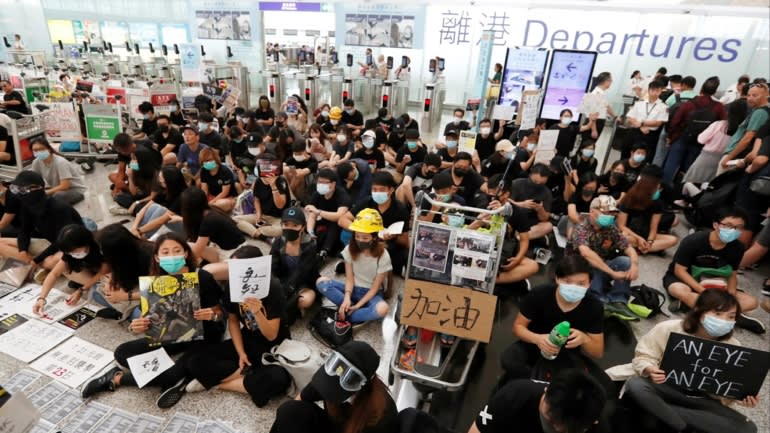 Anti-government protesters sit on the floor in front of security gates during a demonstration at Hong Kong Airport on Aug. 13.   © Reuters

Cathay's stock fell 7.3% over the first two days of trading this week after the Civil Aviation Administration of China ordered the airline to begin submitting detailed crew information for all flights through Chinese airspace and to keep staff involved in the protests off such flights to address "potential serious risks to aviation safety."

This followed the participation of Cathay's flight attendants union in a protest at Hong Kong International Airport on July 26 and a pilot's arrest on accusations of rioting over his participation in a city demonstration a few days later.

To the consternation of Chinese authorities, Cathay executives initially showed little public concern. "We certainly wouldn't dream of telling them [staff] what they have to think about something," Slosar said on Aug. 7. "They are all adults. They are all service professionals. We respect them greatly."

Since the CAAC order, Cathay has fired the arrested pilot as well as a colleague who "misused company information" and two ground staffers accused of leaking information about police travels. Hogg also issued a letter to staff on Monday warning of "disciplinary consequences" for supporting or participating in protests lacking police authorization. The company and Swire also both issued public statements on Tuesday offering their "resolute support" to the Hong Kong government and condemning "all illegal activities and violent behavior."

Nevertheless, a series of state companies including local units of financial services business China Huarong Asset Management and conglomerates China Resources and Citic have been reported this week to have instituted bans against business trips on Cathay or its Cathay Dragon unit, even though the airline group is a leading player on many routes between the mainland and Hong Kong. An executive of China Resources Beer Holdings earlier Friday declined to confirm the boycott at a company news conference.

"A Chinese expert said Huarong and other Chinese companies' actions could be intended to show their disapproval to Cathay Pacific's weak stance regarding challenges to China's sovereignty," said the state-owned Global Times newspaper on Monday. "Industry insiders said the move shows that China Huarong prioritizes the personal security of its employees as cabin crew members could be rioters and secessionists who may conduct violent onboard attacks that put passengers' safety at risk."

The investment banking arm of state-owned Industrial & Commercial Bank of China issued a "strong sell" rating on Cathay on Tuesday tied to the aviation regulator's order. "We believe this will cause irreversible damage to Cathay Pacific's brand image, particularly among mainland Chinese customers who are increasingly important to the company's growth," it said.

Air China, the country's flag carrier, owns just under 30% of Cathay and holds four of 17 seats on its board. Cathay also holds a smaller stake in Air China.

Even before the boycotts, Cathay, like other tourism-related companies in Hong Kong, was feeling the impact of reduced demand for travel to the city due to the protests. Loo told reporters on Aug. 7 that the carrier was experiencing a "double digit" drop in bookings compared with a year earlier. This plunge could accelerate after the carrier canceled hundreds of flights on Monday and Tuesday when protesters filled the departure hall at Hong Kong International Airport.

K. Ajith, director of Asia transport research at UOB Kay Hian Securities, said Friday that Hogg's departure to take responsibility for the handling of staff involvement in the protests should curtail Chinese pressure on Cathay. "I think it would put it at rest, but I think China just may not rush to say that everything is hunky-dory."

Cathay and Swire are among a group of companies from Hong Kong's colonial era now coming under criticism from Chinese media and internet users.

HSBC Holdings has been attacked for its perceived role in the U.S. prosecution of Huawei Technologies and Meng Wanzhou, its chief financial officer, over bank fraud allegations. The case involves a presentation Meng made to the bank disclaiming links to a company that was trading with Iran. London-based HSBC this month ousted John Flint as chief executive and said its greater China chief had resigned, though it said neither move was related to the Huawei case.

Jardine Matheson Holdings, the Singapore-listed parent of Hongkong Land as well as Mandarin Oriental Hotel Group, has also been criticized as insufficiently supportive of the authorities' stance against the Hong Kong protests. Like Swire, Jardine this week issued a public statement of support for Hong Kong's government and police.