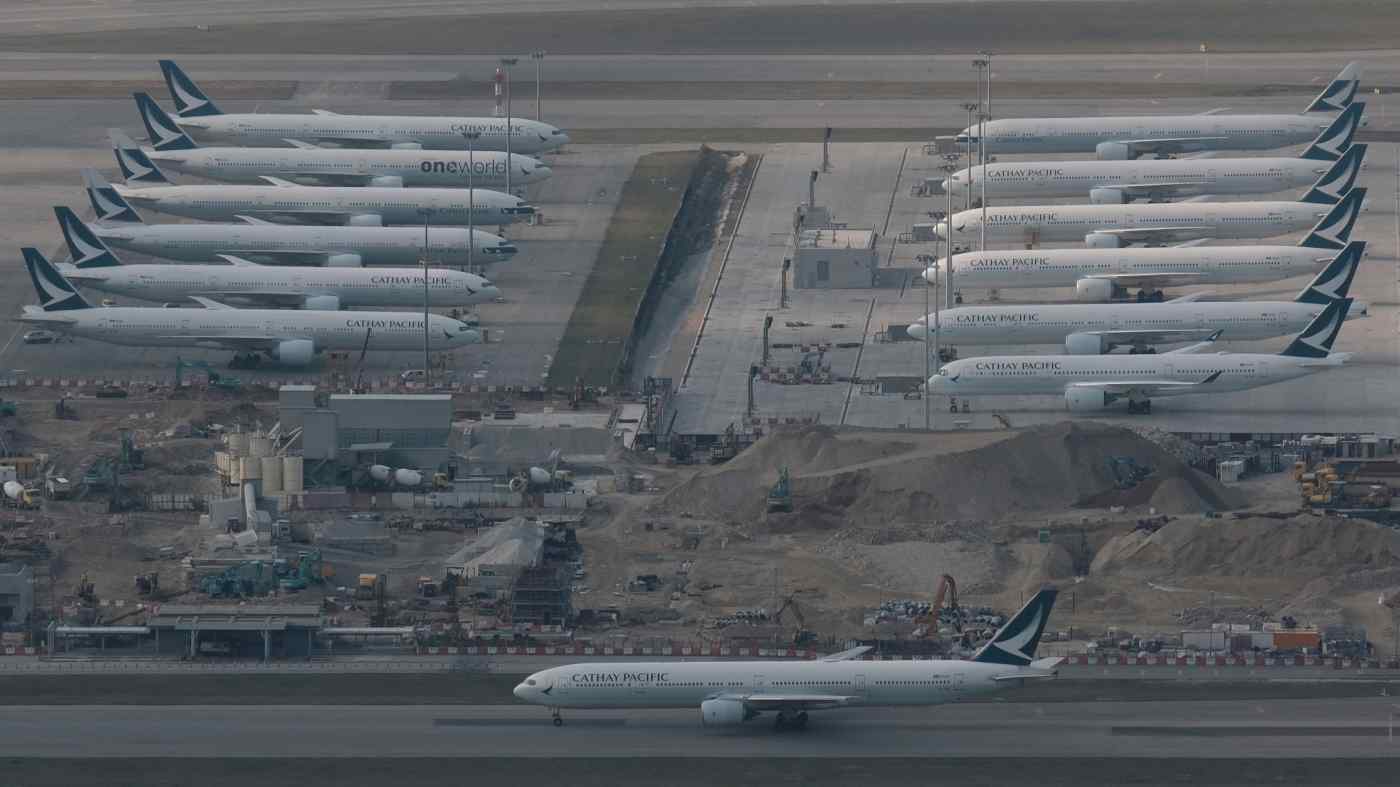 TOKYO/HONG KONG -- Cathay Pacific Airways will halt all but a fraction of its passenger services as travel restrictions and vanishing demand due to the coronavirus pandemic further pressure Hong Kong's flagship carrier.

The company said Friday that it would cut capacity on its full-service passenger flights, operated under its Cathay Pacific and Cathay Dragon brands, by 96% during April and May. Hong Kong Express, the company's budget subsidiary, will halt all flights from March 23 until the end of April, expanding on a previous 86% capacity cut for March.

"We need to take difficult but decisive measures as the scale of the challenge facing the global aviation industry is unprecedented," said Ronald Lam, chief customer and commercial officer at Cathay Pacific, in a statement. "Travel restrictions are making it increasingly difficult for our customers to travel and demand has dropped drastically."

As of Thursday, all international arrivals in Hong Kong are subject to two weeks' self-quarantine, with their location monitored by tracking bracelets. A heightened official alert warns against any outbound travel. Many of Cathay's flight destinations have put up similar controls.

"Our ability to maintain even this (new) skeleton schedule will depend on whether more travel restrictions are imposed by governments around the world which will further dampen passenger demand," Lam said.

Cathay Chairman Patrick Healy warned last week that the company would "incur a substantial loss" in the first half of 2020 due to COVID-19 even as it reported a lower-than-expected profit decline for 2019.

Lam had said on Monday that the airline was looking at slashing passenger capacity for April and May by 90% after a two-thirds cut for March. According to data released that day, Cathay carried just 1.01 million passengers last month, a 64.4% fall from a year earlier.

The proportion of seats occupied by paying passengers meanwhile plunged to 53.1% from 72.4% as the company warned that its full-service operations had posted a loss of more than 2 billion Hong Kong dollars ($257.59 million) for the month.

The update alarmed Daiwa analyst Kelvin Lau who on Tuesday told clients he believed the company only has around HK$20 billion in liquid funds to meet HK$41.5 billion in lease and loan payments and other financial obligations this year. He also estimated that Hong Kong Express had continued to post losses.

"This is a decision we have not taken lightly," she said. "Unfortunately, it is now essential in order to ensure we see ourselves through this extremely difficult period. Given all the challenges we have been facing, preserving our cash position is key to make sure we stay together as team."

Normal operations for the group now look unlikely to return until the July-September quarter than between April and June, Lau said, while warning that anti-government protests in the city might also return ahead of legislative elections scheduled for September.

While he downgraded his rating on Cathay to "hold" from "buy," with a projected annual net loss of HK$9 billion, Lau expects the company to survive.

"We believe it will be easier for CX (Cathay) than smaller airlines to source capital" by taking steps such as selling and leasing back planes, he said. "We also believe its major shareholders, including Swire Pacific and Air China, would be willing to provide financial support, if required."

In its annual financial results last week, Cathay said its "directors believe that with the cost saving measures being taken, the group's strong vendor relationships, as well as the group's liquidity position and availability of sources of funds, the group will remain a going concern."

Cathay shares initially rose in Hong Kong on Friday before turning downward in the afternoon following the announcement of the flight cuts to close 1.1% lower at HK$8.07.

Hong Kong Secretary for Transport and Housing Frank Chan Fan told reporters on Friday that HK Express was "taking good care of the passengers and also their staff," indicating government approval of its service suspension.

The group has asked staff to take unpaid leave and frozen hiring while seeking discounts and extended payment schedules from suppliers and suspending its year-end dividend.

Hong Kong Airlines, Cathay's only remaining locally based competitor, was already in even more straits before the pandemic outbreak. Last month it announced it would halt in-flight services.

In contrast to the dire passenger situation, Cathay's cargo operations, the largest of any Asian air carrier, are picking up.

"While our freighter network remains intact, we are also ramping up our cargo capacity by mounting charter services and operating certain suspended passenger services purely for airfreight to meet cargo customer demand," Lam said. Normally, the company depends on passenger flights for about half its cargo capacity.

With so many other airlines also having cut back on flights, space on Cathay's cargo services, which include subsidiary Air Hong Kong, was in high demand last month, with the share of freight capacity utilized rising 5.8 percentage points to 66.6% from a year before. Nevertheless, overall cargo tonnage carried fell by 9.6%.

Cathay's announcement of cutbacks on Friday was only the latest among Asian airlines. Qantas and Virgin Australia this week both said they would suspend all international flights. The Philippines' Cebu Air by contrast has halted all domestic flights.

"Ordinarily, an airline cutting 5% of capacity would make news," Hong Kong-based aviation analyst Will Horton tweeted after Cathay's announcement. "Now (about) 5% is all that's left for Lufthansa, Cathay and unfortunately more airlines to come."