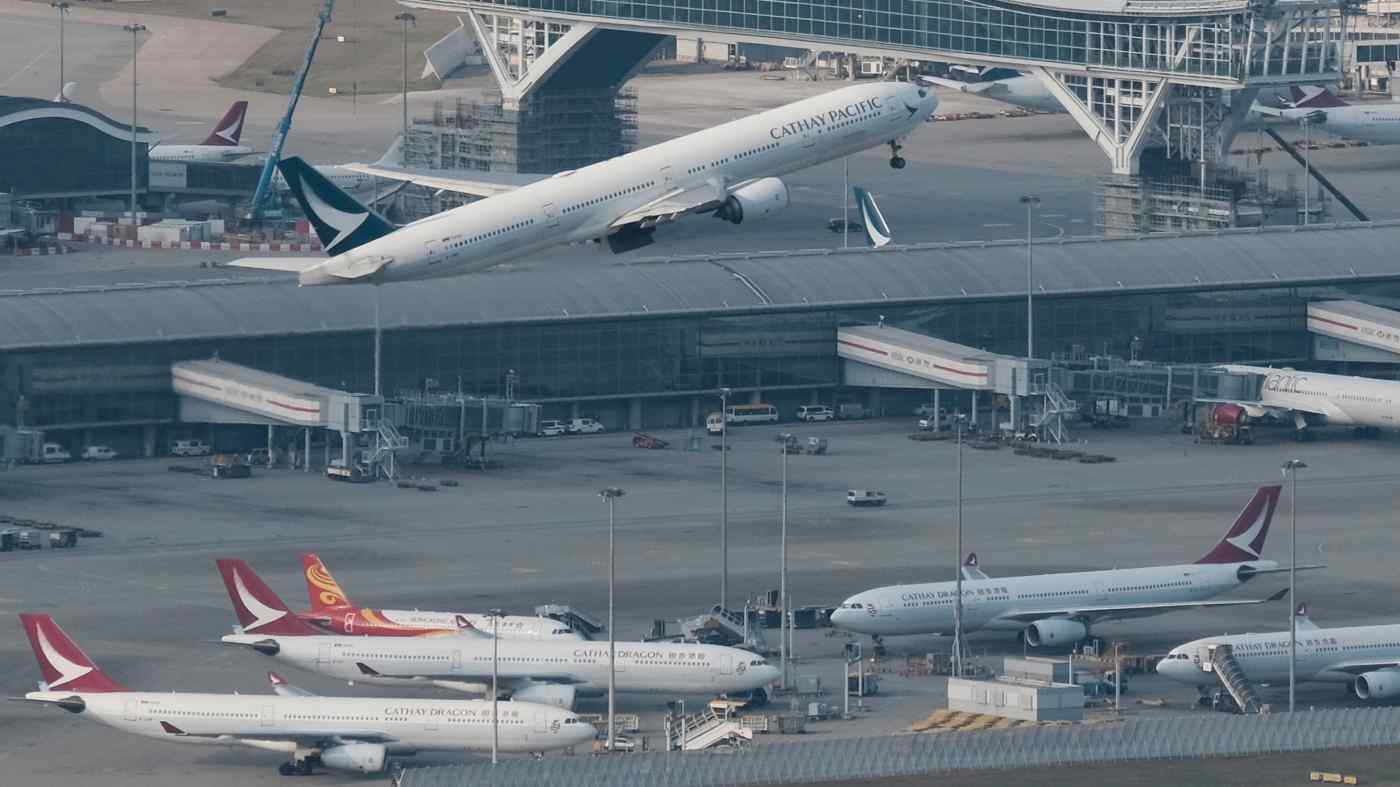 HONG KONG -- Cathay Pacific Airways on Wednesday said it will slash 8,500 jobs as part of a major restructuring to deal with ongoing woes brought on by the coronavirus pandemic.

Hong Kong's flagship carrier will also eliminate Cathay Dragon as a separate unit for regional flights with immediate effect and divvy up its routes between its main Cathay Pacific brand and budget unit Hong Kong Express.

"[This] has been the most challenging year in Cathay Pacific's history," Chairman Patrick Healy said during an online news conference. "The future remains highly uncertain. This crisis is deeper and the road to recovery is slower and more patchy than anyone thought possible just a few short months ago."

The 8,500 positions that will be cut account for about 24% of the total workforce of the group. Of that figure, 5,300 are Hong Kong-based while 600 are overseas. The timing for the cuts will be subject to local regulation.

The remaining 2,600 positions will be eliminated by not filling vacant posts and shutting down certain overseas bases. Some Cathay Dragon routes are to be transferred to sister carrier Hong Kong Express, but details have yet to be determined.   © Reuters

"We are very disappointed at the company's decision," Zuki Wong Sze-man, chairwoman of the Cathay Pacific Airways Flight Attendants Union, said at a news conference. "We had proposed an alternative cost-cutting plan and a voluntary resignation package, but the management did not adopt our ideas."

Wong added that the union would meet with Cathay management later on Wednesday to negotiate contractual changes for employees remaining with the group.

Investors, however, responded positively to the news. Cathay shares rose 2.3% to HK$5.85 on Wednesday in Hong Kong. The stock had lost more than 40% of its value since the beginning of the year.

Including pay cuts for its remaining employees, Cathay Pacific expects the total cost of the restructuring to be around 2.2 billion Hong Kong dollars ($283.9 million). The company said it will fund the restructuring through internal resources.

In addition to direct restructuring costs, Cathay anticipates substantial impairment charges will be incurred on its books, including HK$1.3 billion in deferred tax assets.

With this latest round of its restructuring efforts, the airline estimates that it will lower its monthly cash layouts next year by about HK$500 million. However, that is still far short of covering a monthly cash burn of between HK$1.5 billion and HK$2 billion.

Asked whether the airline expects further rounds of restructuring, Healy said that "it is absolutely not inevitable that we would require more funding," citing a strong balance sheet and liquidity.

He said that the cash-burn level would be down to a "more sustainable level" after the implementation of the current restructuring, but added that he does not "know what the future holds" under the pandemic.

Cathay's staff cuts come at a time when Hong Kong is suffering its worst unemployment in 16 years. The July-to-September jobless rate, released on Tuesday, stood at 6.4%, compared with 6.1% for the previous rolling three-month period and the highest level since 2004 when the city was recovering from the SARS epidemic.

Hong Kong Financial Secretary Paul Chan, who directed a $5 billion government-led bailout package for Cathay in June, said in a statement on Wednesday that the "business restructuring plan is a commercial decision by the Cathay group."

He noted that the two observers appointed by the government to Cathay's board have "reminded the group's management of the need to keep the impact caused to its employees and the society to the minimum in restructuring its business." "It's safe to say that we won't certainly be seeing the return of the Cathay Dragon brand," company Chairman Patrick Healy said on Wednesday.   © AP

In addition to the government-led rescue plan in June, Cathay also accepted subsidies from the government under the first phase of the pandemic-related Employment Support Scheme, which requires recipients to safeguard jobs, but the airline refrained in September from applying for the second round of the program.

The Air Transport Action Group, an independent coalition of industry organizations and companies, estimated last week that 46 million jobs globally are at risk due to the pandemic.

Singapore Airlines, Cathay's regional rival, said last month that it would cut roughly 4,300 positions under the expectation that it would operate at less than 50% of its pre-pandemic capacity until at least March 2021.

In September, Cathay operated its passenger service at 9% of pre-pandemic levels, marginally up from 8% in August. It carried just 1,568 daily passengers on average for the month.

The airline indicated earlier in the week that it expects air travel demand will remain subdued, given the assumption that a COVID-19 vaccine will not be widely available until mid-2021.

Ronald Lam, Cathay's chief customer and commercial officer, said on Monday that the airline is expecting passenger operations to remain at 10% of pre-pandemic capacity for the rest of the year and "under 50% for overall 2021." Even that bleak scenario is "the most optimistic that we can responsibly adopt at this moment," he said.

Cathay last month moved to raise the share of its jet fleet parked in long-term storage outside Hong Kong to 40% from about 33% amid darkening prospects for a quick recovery in passenger traffic.

Budget carrier Hong Kong Express will remain "a simple low-cost leisure brand," he said, adding, "It is safe to say that we won't certainly be seeing the return of the Cathay Dragon brand" even when the market improves.

Luya You, transport analyst at BOCOM International, said, "Cathay's forecast for their 2021 operations may be over-bullish in our view."

While a vaccine may be on its way, You said that she is "unsure on the viability of global routes across 2021, as many countries will likely allow domestic flights but continue to restrict global flights until a global vaccine uptake reaches a critical point."

She expects more job cuts to come over time. "Cathay's present restructuring plan is just as dynamic as the present market. We can expect evolving strategies over the course of the next year," she said.

Even though airlines around the world are struggling, the wounds are not equal. Cathay and Singapore Air may be among the hardest hit given that they do not have domestic markets to fall back on at a time when global borders remain closed or severely restricted.

The recovery has been even more notable for China's smaller carriers. China Express Airlines, a private Chongqing-based regional carrier, notified investors last week that it earned a net profit of between 152 million yuan to 174 million yuan ($22.7 million to $26 million) in the third quarter. The operator of Shenzhen Bao'an International Airport also is expecting a net profit for the July to September quarter.

Andrew Lee, an analyst at Jefferies in Hong Kong, said in a report on Wednesday that the content of Cathay's restructuring is "broadly in line with expectations," as its plans had been widely reported by local media over the past week. He said that the initial market response underscores the fact that it "removes a key overhang" for the airline.

"The key question," Lee said, is "the positioning of low-cost-carrier HK Express." Many Cathay Dragon routes are expected to be transferred to the budget carrier, but details have yet to be determined, including whether to retain Cathay Dragon's business class. He maintained his "hold" rating.

What is now Cathay Dragon was, like Hong Kong Express, originally set up as a competing rival to Cathay, but was eventually acquired by the group.

Hong Kong Airlines is Cathay's only remaining locally based competitor although an investor group including the owner of Donghai Airlines, a carrier based in the neighboring city of Shenzhen, has applied to start a new Greater Bay Airlines in Hong Kong.

"I feel sorry for the loss of jobs and the Hong Kong-bred Cathay Dragon brand," Hong Kong Secretary for Transport and Housing Frank Chan said to reporters, choking back tears. "We have told Cathay to retain the core talents and take care of staff benefits."