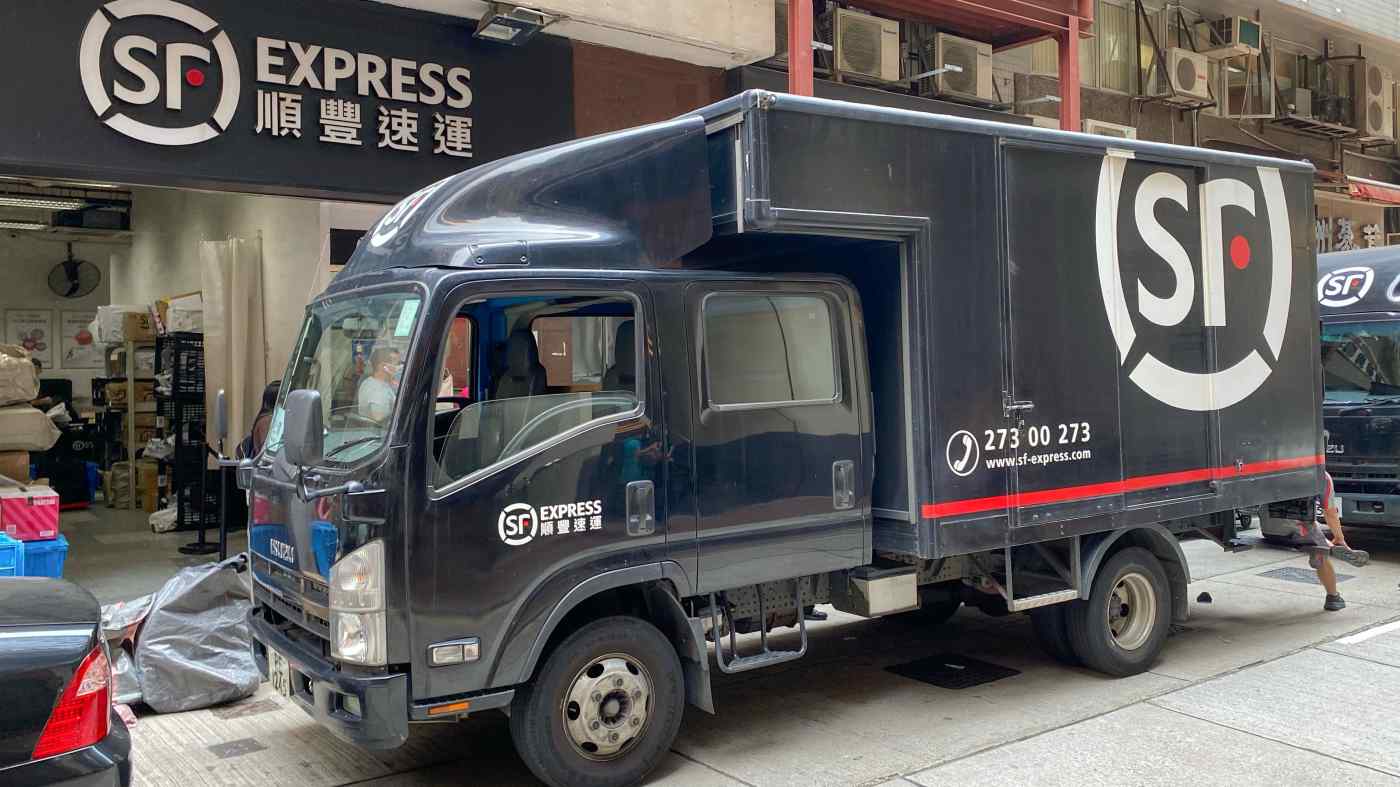 HONG KONG -- A fierce price war is coming hand-in-hand with an exponential growth in volume in China's express delivery industry, hitting some of the sector's biggest names and exposing the costs of a dash for growth.

The stiff competition has been made stiffer by a big increase in demand for deliveries brought on by the coronavirus pandemic. Some companies are striking alliances or seeking more growth abroad in search of a competitive edge.

Even market leader SF Holding has been dragged into the red. The Shenzhen-listed company said on April 8 that it expects a net loss between 900 million and 1.1 billion yuan ($137 million to $168 million) for the first three months of the year, compared with a net profit of 907.29 million yuan for the same period last year.

Shares in SF, which had been considered one of the few winners from the battle among parcel service providers in China, fell by the daily price limit of 10% to 72.72 yuan on Friday. The sell-off was carried over to Monday, where it further lost over 8% during the morning session.

Frank Yip, an analyst at Daiwa Capital Markets in Hong Kong, said it was an "unexpected net loss," in a brief note to clients.

Even though its average price per parcel dropped 19% last year, its total volume jumped 68% to 8.13 billion pieces, offsetting the negative effect of the worsening price war.

STO Express, a Shenzhen-listed rival, has already warned investors that its net profit in 2020 is expected to be between 30 million and 42 million yuan, a 97% to 98% drop from the year before. STO's board said the company had invested heavily in its network and increased its sales expenses to cope with the "intense competition."

SF said its expected loss was a result of more spending on multiple fronts. Since the end of last year, it has started to re-engineer its infrastructure, including the enhancement of automated handling capabilities to deal with bottlenecks emerging from the exponential growth in volume.

Pay for employees on the front line also reached a "new historic high," according to the company, as delivery services were maintained as normal during the weeklong Lunar New Year break in mid-February. This was done for competitive reasons and pushed up costs.

"Showing warm solicitude to the employees will turn into productivity and help attain [the] mid- to long-term goals of the company," SF said.

Investing more in infrastructure -- and to a certain extent in people -- is already happening elsewhere in the industry. ZTO Express, a Shanghai-based peer, recorded a 14% increase in revenue last year to 25.21 billion yuan, while its net profit dropped 24% to 4.31 billion yuan, as it plowed 920 million yuan into capital expenditures last year.

"We will continue to invest in capacity-building," Lai Meisong, founding chairman and CEO of the U.S. and Hong Kong-listed company, told reporters last month. "We are going to continue to invest heavily over the next few years to widen the distance against our competitors."

"The whole industry is experiencing a price war and a lot of the players are not able to continue investing. Therefore, the overall capacity is not able to rapidly grow," Lai added. On the other hand, he believes the overall parcel delivery market in China is set "to more than double by the end of the 14th Five-Year Plan period," in 2025.

New alliances are being forged among competitors as well. Yunda Holding, a Shenzhen-listed express courier, has paid 614 million yuan to acquire a 6.5% stake in Shanghai-listed Deppon Logistics through a private share placement. Yunda is now the second-largest shareholder in Deppon, which is spending the proceeds to upgrade its transport center facility and IT capabilities.

As companies try to survive the cutthroat domestic competition, many are looking beyond China's borders.

SF recently said it would buy a 51.8% stake in Kerry Logistics Network for 17.55 billion Hong Kong dollars ($2.26 billion) to gain access to the Hong Kong-listed company's wide global network. Kerry is present in 59 countries and regions.

The two companies disclosed on Friday evening that they have received an antitrust approval from China's State Administration for Market Regulation, which slapped a record fine on Alibaba Group Holding on Saturday.

YTO Express Group, a Shanghai-listed express delivery company will deepen its operations outside China. Huang Yifeng, president of its Hong Kong-listed subsidiary, YTO Express (International) Holdings, told reporters in an online new conference on Friday that the company wants its revenue to be split evenly between home and abroad "within three years."

The air and ocean freight forwarding company, which was originally acquired by YTO in 2017, earned less than 20% from abroad last year, but Huang sees opportunities mainly in Southeast Asia and Europe, along with Japan and South Korea, which are already served by direct flights by the group's cargo airline.

Best opened an $8 million sorting center in Ho Chi Minh City last December that can handle up to 1 million parcels a day and is expected to hire 1,000 people over the next few years. The company is also expanding its existing facility in Thailand.

The U.S.-listed company suffered a 7% drop in revenue and a net loss of 1.68 billion yuan in 2020. It has started to restructure and has shut down its Store+ business, a loss-making segment that offered online merchandise sourcing and store management services for convenience stores since 2015.

Despite challenging times at home, founding Chairman and CEO Johnny Chou, also known as Zhou Shaoning, said: "Southeast Asia is our largest international market, and we plan to continue to invest in the region with both rigor and determination."