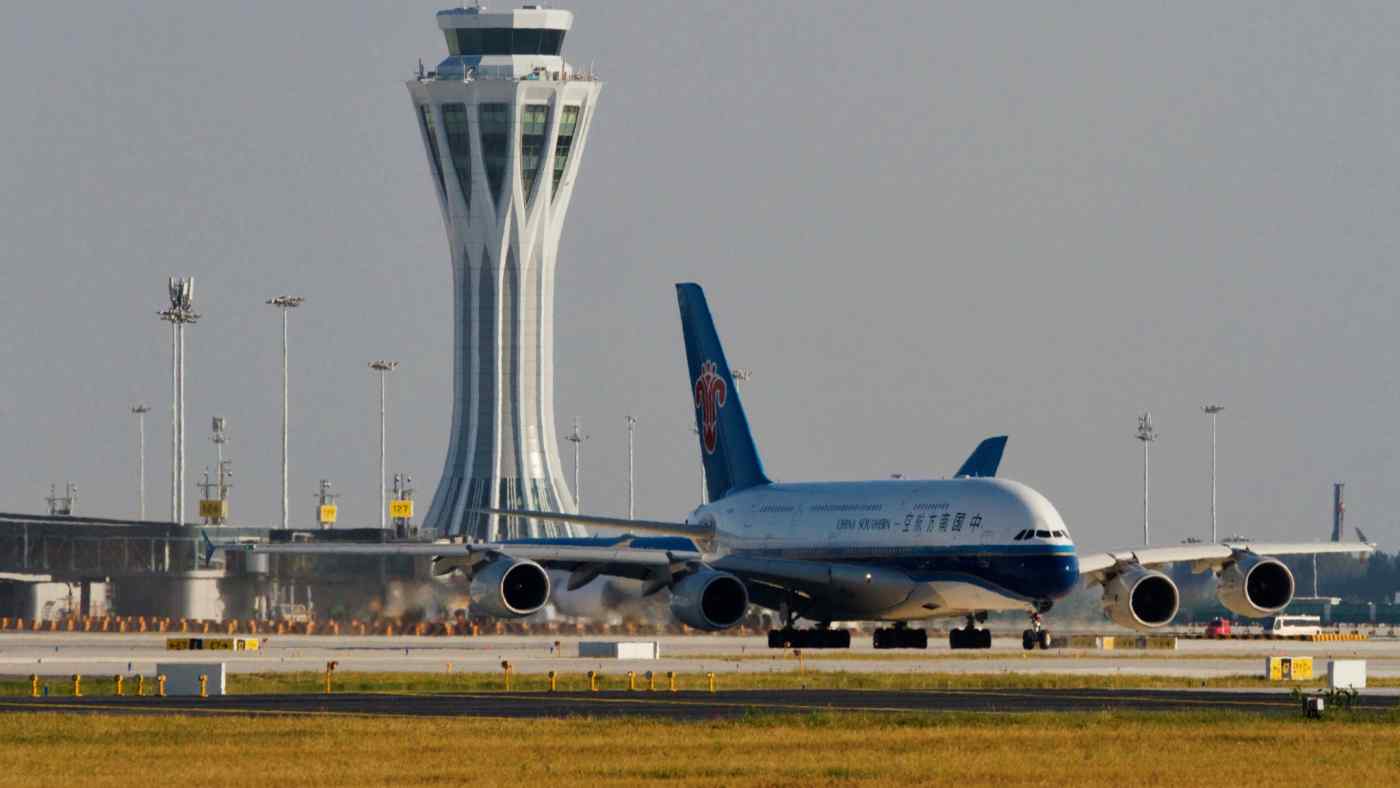 HONG KONG -- While benefiting from a faster recovery in domestic travel than other international carriers, China's three big state-owned airlines warned Friday that they expect combined net losses of up to $6 billion for 2020.

China Southern Airlines, China Eastern Airlines and Air China estimate net losses for last year to be between 31.2 billion yuan and 38.8 billion yuan ($4.85 billion and $6.03 billion), compared with profits of 12.2 billion yuan in the pre-pandemic year of 2019, according to separate announcements after trading hours.

Despite faring better than many international peers in terms of passenger numbers, Chinese airlines were unable to avoid the red ink spilled by carriers worldwide in a year when pandemic-induced lockdowns froze travel.

The Chinese aviation industry "faced unprecedented and severe challenges," Wang Jian, company secretary of China Eastern, said in a statement. "The market demand and willingness of passengers to travel have dropped significantly."

The three airlines are dual listed in Shanghai and Hong Kong.

Smaller state-owned carrier Shandong Airlines said in its filing Friday that it expected a net loss of between 2.1 billion yuan and 2.6 billion yuan for last year. The Shenzhen-listed carrier recorded a net profit of 361 million yuan the year before.

Shanghai-based China Eastern's passenger count in 2020 dropped by 42.8% from a year ago to 74.48 million. Air China, the national flag carrier, served 68.69 million passengers, a 40.3% decline. For China Southern, the largest of the three, the fall was slightly smaller at 36.1%.

However, China Southern's 96.85 million passengers in 2020 is likely to be the largest tally among global carriers, as U.S. rivals that occupied the top four slots in 2019 have suffered much sharper declines.

American Airlines on Thursday reported a 57.8% drop in passengers to 65.75 million. Southwest Airlines the same day said it served 67.78 million passengers, 58.3% fewer than a year ago. United Airlines announced last week that it carried 57.76 million passengers, a 64.4% decline. Delta Air Lines had neither disclosed its annual passenger data nor responded to a query from Nikkei Asia by the time of publication.

Major European rivals that made the top 10 in 2019 -- Ryanair, Lufthansa, and IAG -- also saw their passenger figures drop by over 60% for either the full year or the first nine months. This makes it likely that not only China Southern, but all three big Chinese airlines rose to the top three air passenger carriers in the world last year.

China's Guangzhou airport crowns itself the world's busiest for 2020

China Southern pushed its hub Guangzhou Baiyun International Airport up to the throne. The airport on Monday said it became the busiest in the world last year. Its drop in passengers was milder than other major hubs, including Hartsfield-Jackson Atlanta International Airport in the U.S., which held the crown for over two decades

Chinese airlines' earnings damage was also lighter than what their American counterparts suffered. The total net losses of the top four U.S. carriers last year add up to $31.4 billion, compared with total net profits of $11.7 billion in 2019.

According to the International Air Transport Association, total losses in the global aviation industry in 2020 are estimated at about $118.5 billion. IATA said the unprecedented year for the industry has cost more than 350,000 jobs worldwide in the sector, while over 40 airlines have fallen into bankruptcy.

HNA Group, the parent of Hainan Airlines, said in its official WeChat account Friday that creditors had petitioned a court in Hainan to start bankruptcy proceedings for the group. The once-acquisitive conglomerate said it will "cooperate" with the court and "support" the court's actions to protect the legal rights of the creditors.

If the petition is approved, HNA would become the first Chinese airline parent to go into bankruptcy -- a process that major U.S. peers have gone through in the past.

The outlook for airlines hinges on efforts to contain the spread of the coronavirus.

"The discovery of several effective vaccines towards the end of 2020 provided hope that recovery was on the horizon as large scale vaccinations of their people, will give governments the confidence to allow travelers from abroad without restrictions," Subhas Menon, director general of the Association of Asia Pacific Airlines, said Friday.

However, vaccine rollouts across the world have been slower than expected, while new waves of infections driven by variants of the virus mean the prospect of an end to the pandemic remains elusive. China, which claimed to have contained its coronavirus outbreak, is now seeing a spike in infections. The Lunar New Year travel season, which kicked off Thursday, may be marked by severe restrictions on the brisk domestic air travel that made China stand out from the rest of the world.

"Looking ahead, many industry challenges remain, as restrictions on cross-border travel will continue to affect air travel demand in 2021," Menon added.