China's top airlines see recovery in traffic, but not in profits HONG KONG -- As China recovered from the worst of its battle against the coronavirus pandemic and life gradually returned to normal, the country's airlines were able to do what other global aviation companies were unable to amid border closures and lockdowns: cash in on their large base of domestic passengers.

But while passenger traffic for air travel within mainland China has showed a remarkable recovery, the country's top three airlines posted deep first quarter losses, adding up to $2.2 billion.

Among the trio of carriers, which announced their quarterly results late Thursday, China Southern Airlines was the sole company to report growth in revenue. Even so, it was a mere 0.5% increase from the first three months of last year, to 21.25 billion yuan ($3.28 billion). At China Eastern Airlines and Air China, their top lines dropped more than 10%, year-over-year.

During the first three months of this year, the three airlines carried roughly 55 million passengers, up 47% from the same period last year, when COVID-19 was raging in the country.

And although domestic passenger traffic was still about 30% lower than the first quarter of 2019 -- a year before the pandemic began -- the recovery has been substantial compared with other global carriers, particularly in comparison with Hong Kong's Cathay Pacific Airways and Singapore Airlines, both of which do not operate domestic flights. 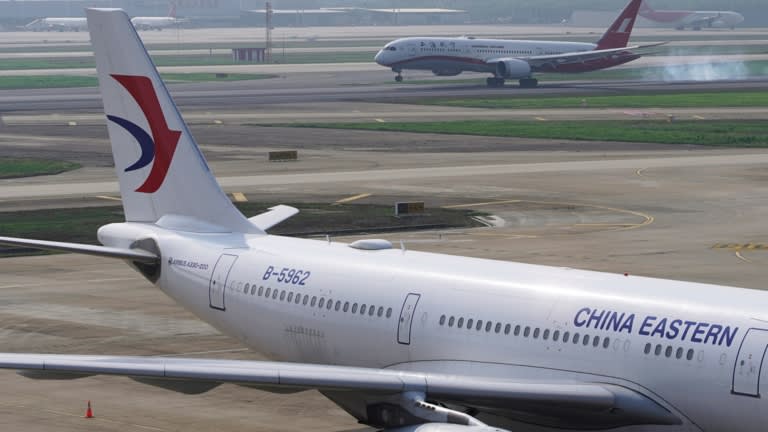 Meanwhile, the global surge in demand for pandemic-related medical equipment and the growth of e-commerce pushed up cargo deliveries for the three airlines by 29% to 849,420 tons in the first quarter, but that growth was not enough to offset the decline in revenue elsewhere.

The sluggish figures can be attributed to an underwhelming performance during the Lunar New Year holiday in mid-February. The 40-day special transportation period designated by the Chinese government each year is the peak travel season, during which carriers are normally able to fill their seats, even with higher ticket prices. But this year, the government actively discouraged people from flying.

"The government, in contrast to 2020, did not impose a strong lockdown, but instead strongly encouraged its citizens to refrain from traveling to their hometowns to spend the Lunar New Year," said Sharon Dai, data and product director at the Centre for Aviation, known as CAPA, a Sydney-based market research specialist.

"Lunar New Year is one of the rare opportunities for the highly competitive airline industry in China to make a profit," she said at a recent industry forum, but added that the opportunity to take advantage of that was lost.

On top of the government's policy to deliberately dissuade travel, "the sporadic COVID-19 cases in certain areas of China posed certain adverse impact on the recovery of air travel demand," Liu Shaoyong, chairman of Shanghai-based China Eastern, said in a statement.

Echoing that sentiment, Xie Bing, company secretary at China Southern, said in a statement that during the first quarter, "the recovery of the aviation industry faced challenges due to the continued impact of the COVID-19 pandemic."

Those factors kept the airlines' bottom lines in the red. The combined net loss for the top three carriers stood at 14.02 billion yuan in the first quarter, nearly the same as last year, which was generally assumed to be the worst quarter in terms of the impact of the pandemic on mainland Chinese aviation. 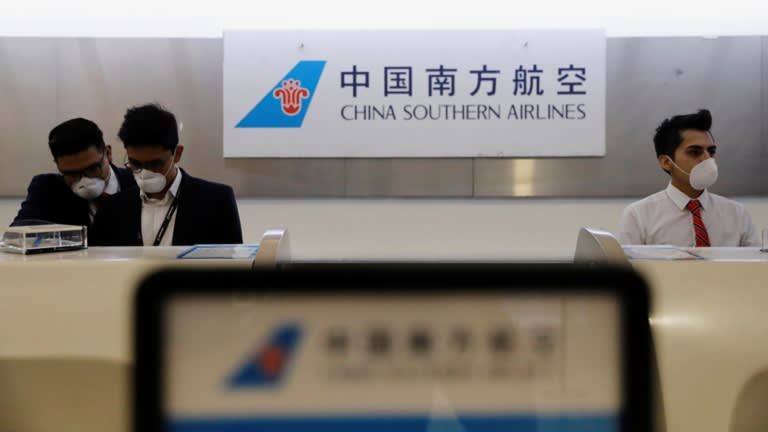 A China Southern Airlines ticket counter in Mexico City. The carrier spent 1.1 billion yuan less in finance costs in the first three months of this year due to the strong yuan.   © Reuters

The three actually enjoyed a strong tailwind, due to a robust yuan, as they generally pay for aircraft and fuel in dollars and other foreign currencies. Their respective finance costs were down 31% to 43%, compared with the same period last year. China Southern, for instance, spent 1.1 billion yuan less in the first three months of this year because of the strong yuan.

Kelvin Lau, aviation analyst at Daiwa Capital Markets in Hong Kong, noted that "excluding the foreign exchange impact, we believe the adjusted net loss improvement in [the first quarter] was less pronounced," as the improvement in the net loss for the Guangzhou-based airline was about 1.25 billion yuan.

For China Eastern, whose net loss shrank only a bit more than 100 million yuan, Lau estimated that the bottom line would have been even worse without the tailwind from the foreign exchange market.

Beijing-based Air China was the hardest hit, as it is relatively more reliant on international flights than its competitors. Its quarterly revenue decline of 15.5% and net loss of 6.207 billion yuan were the worst among the three top airlines.

For the country's low-cost and smaller carriers, the first quarter showed mixed trends.

Things were slightly better for other smaller competitors. Juneyao Airlines, another Shanghai-based private carrier, posted a 3% gain in revenue to 2.45 billion yuan, while Hainan Airlines, a key HNA Group company that is now in bankruptcy proceedings, saw its revenue grow 12% to 7.73 billion yuan. Still, both airlines reported net losses, although they were smaller than a year earlier.

Despite the weak first quarter results, the outlook for China's airlines looks brighter.

Dai at CAPA said that "there is cause for optimism for China's domestic aviation market," going forward. She pointed to the Qingming festival holiday break in early April, when air travel volume -- or the number of passengers carried -- was at nearly 90% of the pre-pandemic 2019 level, and ticket prices were about 96% of what they were during the holiday two years ago. The upcoming May Day break is expected to be even better.

"We have positive read-throughs from the latest travel booking data for the upcoming Labor Day holiday," Citibank analyst Lydia Ling said in a report. During the first five days of May, she expects tourist numbers to exceed pre-pandemic levels, "which underpins our belief in a more solid travel recovery in China."

Despite the bullish tone from analysts and consultants, the airlines themselves are maintaining a cautious tone.

Xie at China Southern warned investors on Thursday that "in view of the continuing impact of the pandemic on the air transport industry, and the uncertainty of the pandemic trend, it is expected that the operating results of the group will still be adversely affected in the first half of 2021, and there are huge uncertainties."