China to US airfreight prices spike as coronavirus hits

Rates from Shanghai four times higher due to lower capacity Workers unload a cargo plane full of medical equipment that had been flown in from China at the Helsinki-Vantaa Airport in Finland on April 15.    © Reuters
KAZUHIRO KIDA, KEIGO YOSHIDA, and YOHEI MURAMATSU, Nikkei staff writersMay 16, 2020 18:11 JST | China
CopyCopied

TOKYO/BANGKOK -- Air and sea cargo fares have surged due to the coronavirus pandemic, with airfreight prices from Shanghai to U.S. and Europe quadrupling since the outbreak started.

Aviation companies have massively cut back on air cargo operations, as passenger demand for flights have plunged in the wake of travel bans and quarantines. Cargo compartments of passenger flights typically carry 55% of all goods sent by air.

Since the outbreak, aviation companies have been prioritizing the transportation of medical supplies, cutting availability for ordinary goods and causing prices to spike.

A sender now has to pay 70 yuan ($9.87) to send 1 kilogram of goods from Shanghai to the U.S. or Europe, more than four times the pre-coronavirus fare.

Japanese carrier All Nippon Airways said its freight services, which have been reduced by 30% due to the suspension of many passenger flights, are running at full capacity. It stores face masks and other medical supplies on seats and in overhead baggage compartments in passenger planes leaving from Narita Airport near Tokyo. 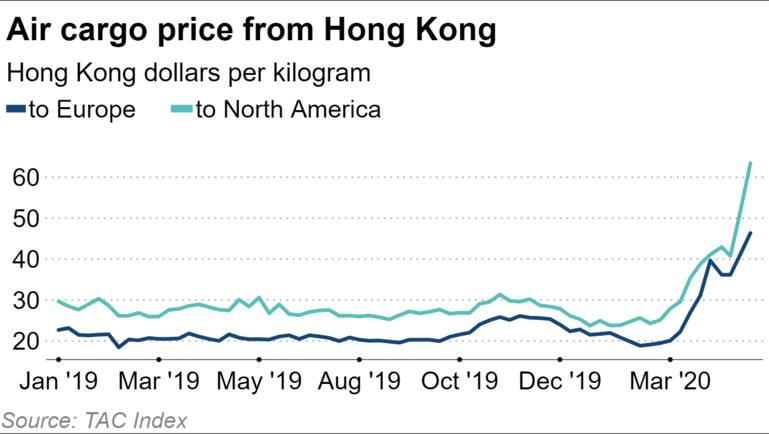 Air cargo leaving Japan totaled 69,320 tons in March, down 25% from a year earlier, according to the Japan Aircargo Forwarders Association. A fall in demand plus an even bigger decrease in capacity are the reasons for the decline.

Shipping capacity is also estimated to fall by 30% because of landing restrictions and a shortage of seamen.

"There are delays of several days in transporting wheat and other grains on North America to Japan routes," an official at a major shipping company said. The official said it was difficult to draw up a rota of seamen as they were often banned from disembarking when they arrived at their home ports, including Vietnam and India.

Of some 120 countries, only 37 nations and regions, including Japan and the U.S., permit crew switches at their ports, according to a survey by Wilhelmsen, a global maritime industry group based in Norway. Seafarers are usually rotated off ships after three months or so, and a ship cannot set sail without a full crew, under global labor rules.

Maersk of Demark, the world's largest container vessel operator, suspended two of its 10 Asia-Europe routes over the April to June period. It will also stop some sailings on the remaining routes to cut overall operations by 30%. 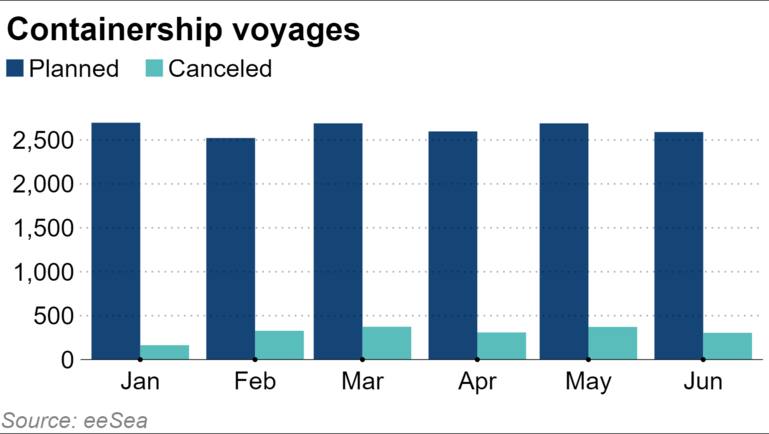 Jefferies, a U.S. financial services company, forecast that the combined capacity of maritime shipping companies will fall by up to 30% in the April to June quarter, up substantially from a drop of 5% to 10% in the previous three months.

Slower distribution is already hitting corporate strategies. For example, auto parts maker Yachiyo Industry has begun airlifting sunroof parts from China to Japan to cut shipping delivery time. But as the company has failed to secure enough airfreight capacity, it is facing delays in production.

Nintendo is also facing problems in the production of its hugely popular gaming console, the Nintendo Switch, in China due to delays in the delivery of electronic components.