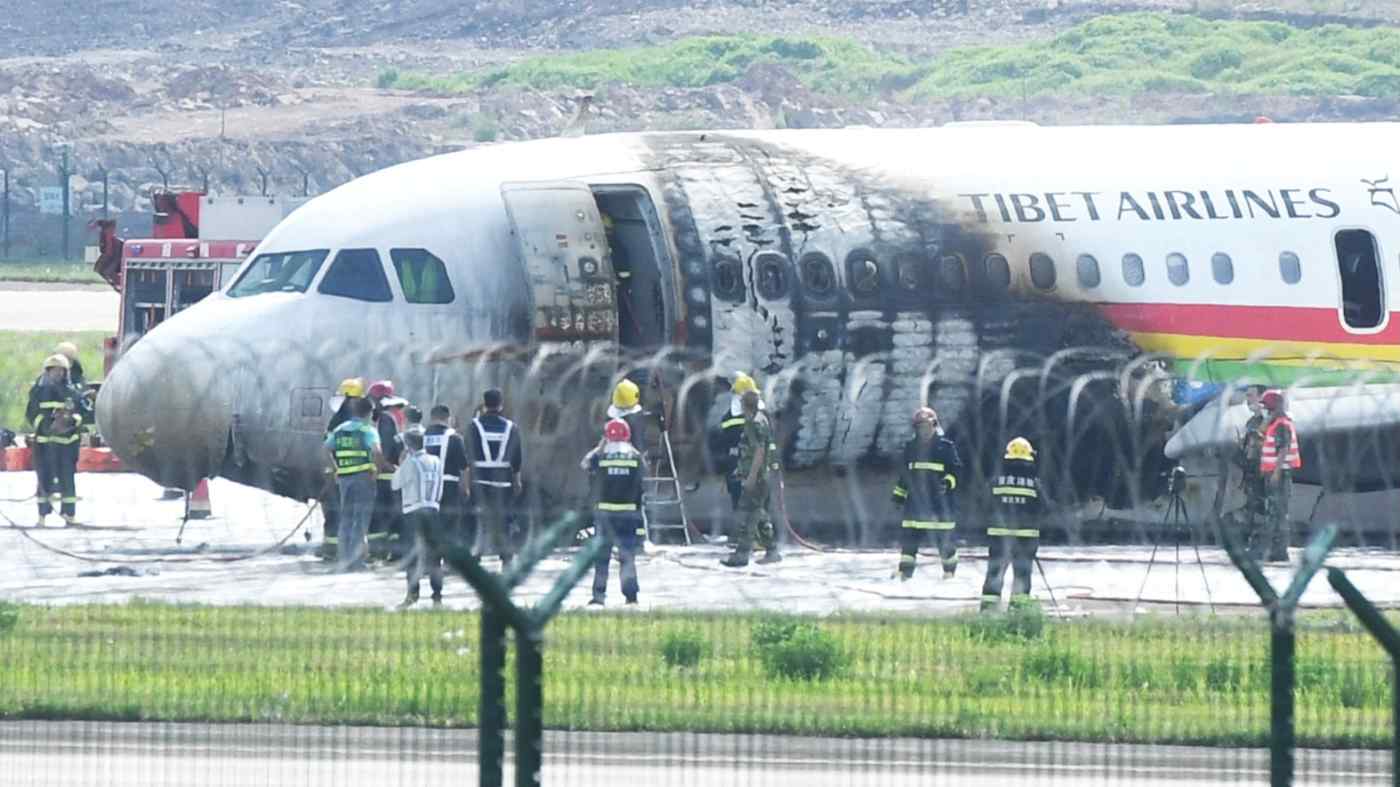 China's civil aviation authority said 36 people suffered bruises and sprains during the evacuation of flight TV9833 on May 12 and were sent to local hospitals for examination. (cnsphoto via Reuters)
May 12, 2022 12:48 JSTUpdated on May 12, 2022 15:02 JST | China
CopyCopied

BEIJING (Reuters) -- China's Tibet Airlines said all passengers and crew had been evacuated from an Airbus A319 plane that caught fire after an aborted takeoff in the southwestern city of Chongqing on Thursday.

There were no deaths and only minor injuries among the 113 passengers and nine crew members on board, the airline said in a statement.

Civil Aviation Administration of China (CAAC) said 36 people suffered bruises and sprains during the evacuation of flight TV9833 and were sent to local hospitals for examination.

The pilots had interrupted the takeoff in line with procedures after experiencing an abnormality, CAAC said in a statement, leading to an engine scrape and fire after the plane veered off the runway.

Emergency plans were activated and investigators rushed to the scene, the aviation regulator added.

Unverified video on social media showed a Tibet Airlines plane, a subsidiary of Air China, with heavy smoke and flames pouring from the left side of the aircraft as passengers and crew walked away.

Evacuation slides, which can often cause minor injuries, were deployed, according to unverified photos on social media.

The plane involved is a nine-year-old A319, one of the smallest versions of the A320 family. It is powered by CFM56 engines from CFM International, a joint venture between General Electric GE.N and Safran SAF.PA, according to Airfleets.net.

Airbus said it was aware of media reports about the incident and was making all efforts to assess the situation.

Tibet Airlines is a regional airline based in Lhasa. It has a fleet of 39 planes, including 28 A319s, according to Airfleets.net.

On March 21, a China Eastern Airlines 600115.SS Boeing 737-800 with 132 people on board crashed in mountains in southern China, killing everyone on board. So far there have been few clues about the cause of the accident.

The tragedy shocked a country which had one of the best airline safety records in the world and whose aviation industry was over the past decade, prior to COVID, one of the world's fastest growing markets by passenger traffic.