Coronavirus brings another year of struggle for Thai Airways Thai Airways canceled flights to China and Hong Kong, from early February until the end of March. It has also cut flights between Bangkok and Seoul from five to four round trips per day from Feb. 26 to March 28.   © Reuters
MASAYUKI YUDA, Nikkei staff writerMarch 2, 2020 20:57 JST | Thailand
CopyCopied

BANGKOK -- Thailand's loss-making national flag carrier Thai Airways International expects turbulence ahead due to the outbreak of the new coronavirus known as COVID-19.

On Monday, the state-owned airline announced that it had ended the year with a net loss of 12 billion baht ($383 million) in 2019. It was the third straight year with a net loss. The loss was larger by 3.6% compared to the previous year. Total revenue decreased 7.7% to 184 billion.

The quarter ended December 2019 with a net loss of roughly 900 million baht on total revenue of 43.5 billion baht. Investors are expecting tough weeks and months ahead for the airline. Shares of Thai Airways temporarily slid to 3.76 baht on the Stock Exchange of Thailand on Monday, down 3.6% from Friday to a historical low.

The virus outbreak has already signaled headwinds for the carrier.

"The aviation industry in 2020 will still face challenges from the COVID-19 virus which has become widespread ... in many countries, causing Thailand and the governments of various countries to prohibit or advise their citizens to refrain from traveling to countries that [have confirmed cases], which inevitably affects the aviation and tourism industry," wrote Thai Airways President Sumeth Damrongchaitham. Thai Airways "has to diminish its flights and traffic production in accordance with the number of passengers that have significantly decreased, which [affects the airline's] operations as it is currently in the high season of the business," he added.

Shares stood at 13.1 baht when the president was appointed in September 2018.

For Thai Airways, the first quarter of the year is the most profitable time, as it can expect many Chinese visitors to Thailand during the Lunar New Year holidays. The troubled airline inked net profits for four quarters in the past three years. Of them, three were for the first quarter. The difficult operating environment in the first quarter this year significantly limits the airline's chances of making an annual profit for 2020.

"In March, April and May, we are considering reducing flights 20%," Soradej Namruangsri, executive vice president of operations, told a news conference on Monday.

The new coronavirus outbreak will result in revenue losses of $27.8 billion in 2020 to airlines in the Asia-Pacific region, nearly half of them Chinese carriers, the International Air Transport Association said on Feb. 20.

Thai Airways' stock price has fallen about 44% so far this year. Major budget carrier AirAsia and full-service rival Singapore Airlines have seen their share prices decline about 40% and 10%, respectively.

The company has started out 2020 well. In January, the airline carried 1.76 million passengers, up 3% year on year. Its efficiency improved as January's seat occupancy rate rose to 82.8% from 80.9% a year earlier. But the flying start quickly lost steam, when the coronavirus virus outbreak started to became a global threat in the latter half of January.

As of Monday, Thailand has 43 confirmed cases of the coronavirus, with one fatality. The government has issued an advisory for citizens to avoid unnecessary travel to high-risk countries, including China, South Korea and Japan. 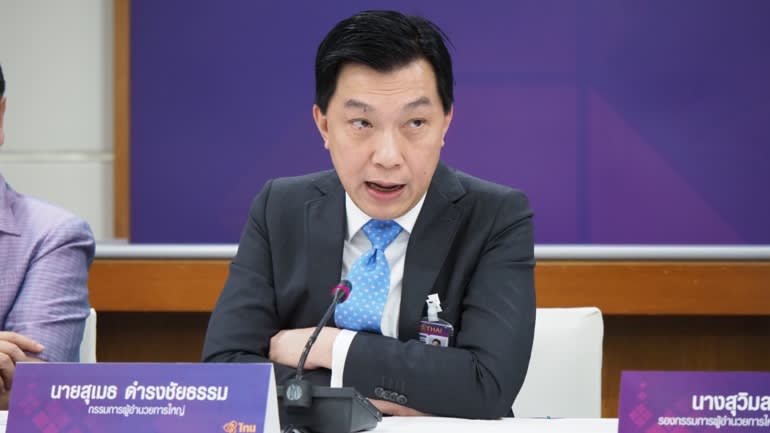 It has also asked Thais or visitors from countries with many patients or confirmed local transmissions of the virus to self-quarantine for 14 days -- a factor that has discouraged people from traveling abroad. A Japanese travel agency experienced a dramatic 70-80% fall in demand from Japanese companies in Thailand, as they started limiting people from going on overseas business trips.

Thai Airways has canceled flights to China and Hong Kong, from early February until the end of March. It has also cut flights between Bangkok and Seoul from five to four round trips a day from Feb. 26 to March 28. Similar flight reductions have hit flights from Bangkok to Singapore, Japan and Italy.

Reducing flights according to demand will allow Thai Airways to trim fuel and landing costs. But it will not help it increase revenue or improve cash flow. Company executives have also reduced their salaries by 15 to 25% effective from March to August. The board of directors also agreed to reduce their remuneration by half.

To regain profitability, the airline has been working on reforms that include improving operational efficiency, such as effective fleet management by expediting the acquisition of 38 aircraft. The airline had previously said the reform will bring sustainable profitability by 2022, but the coronavirus outbreak is forcing it to revise the plan.

"Now is not the time to seek opportunities to raise capital," Sumeth said when asked on Monday if the company has a plan to raise capital soon. "We have to talk about survival, not performance," he said.