More Japanese companies are cutting back on business travel budgets due to the spread of the novel coronavirus, which translates to fewer passengers for bullet trains. (Photo by Koji Uema)
AKANE OKUTSU, Nikkei staff writerMay 11, 2020 17:23 JST | Japan
CopyCopied

TOKYO -- Japan's bullet trains may be an icon of the country's technological prowess, but the shift to remote working and a prolonged downturn in travel brought on by the coronavirus threaten to sidetrack the high-speed services and the Japan Railways Group companies that operate them.

The famously sophisticated and profitable shinkansen, as the bullet trains are known in Japanese, offer fast, comfortable transport across the country for business and leisure travelers. But these days the bullet trains as well as conventional lines are running virtually empty as the government labors to slow the spread of COVID-19.

The shinkansen, which made its debut just ahead of the first Tokyo Olympics in 1964, has run into an obstacle -- as has Tokyo's second edition of the Summer Games, which has been officially postponed.

Earnings at the three listed JR companies suffered badly in the January to March quarter, when the virus outbreak began sapping demand. JR East took a quarterly operating loss of 46.3 billion yen ($431.2 million), its first ever. Its net loss for the quarter came to 53 billion yen, versus a net profit of 22.4 billion yen for the same period last year.

JR Central's quarterly net profit skidded, falling 85% from the previous year to 9.7 billion yen. JR West took its first quarterly operating loss since 2011, when the country was hit by a devastating earthquake. Even before the coronavirus outbreak, Japanese companies were promoting remote work in hopes of becoming more efficient, and in response to changing employee lifestyles. The pandemic has accelerated the shift and could have a lasting impact.

According a survey by Japan's Persol Research and Consulting, 28% of regular employees in Japan work remotely, up from 13.2% in mid-March.

Use of trains has declined further since the Japanese government declared a state of emergency in April. It initially called on people to avoid going out until May 6. The state of emergency is extended, which will prolong the earnings woes of the rail operators.

All three companies postponed their earnings forecasts for this fiscal year, which ends next March, citing uncertainties. 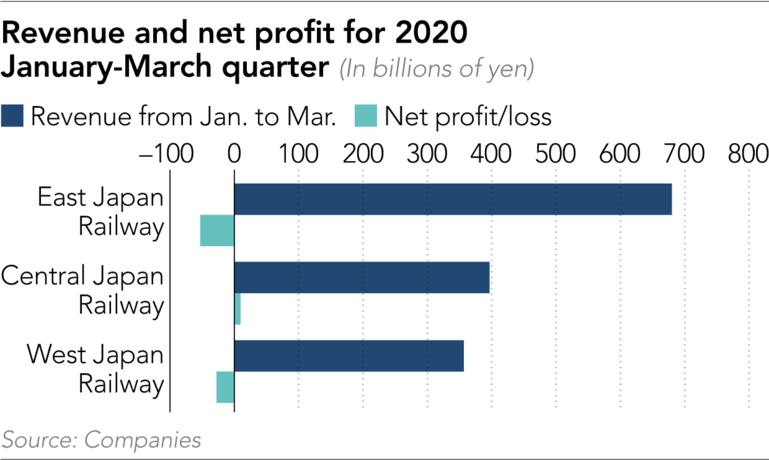 "The business environment will continue to be difficult for some time," said JR Central President Shin Kaneko at a news conference last Monday. Bullet trains account for 90% of the company's revenue from rail services. But bullet train passenger volume in April plummeted 89% on the year. "We would like to secure safe and stable operations," said Kaneko.

Another regional JR group company has begun furloughing employees. Hokkaido Railway Company, which runs the Hokkaido Shinkansen bullet train, began rolling furloughs for around 1,450 station staff and crew, 20% of its workforce, starting May 1. During the furlough period, which ends July 23, workers will be asked to take a few days off each month.

There are few customers at station counters and information desks because of the sharp decline in passengers. This is the first time since 1987, when the old Japanese National Railways was privatized, that a JR company has furloughed employees.

Bookings for Japan's annual Golden Week holiday period -- usually a busy time for shinkansen operators -- were also sharply down. According to the JR Group's six passenger railway companies, the number of bullet and express train passengers between April 24 and May 6 declined 95% to 916,000, the lowest total since 1990 or earlier.

Ticket brokers are reselling bullet train tickets between Tokyo and Shin-Osaka, a popular business route, at discounts of as much as 3,000 yen, more than 20% larger than usual.

"We are bracing for an unprecedented financial environment," said Shoji Kurasaka, director at JR West on April 30. The three companies' nontransport businesses, such as hotels and retailing, have also been hit by the virus outbreak.

SMBC Nikko Securities' analyst Hiroki Kawashima predicts weaker demand due to the virus will continue to weigh on JR Group companies' earnings through the first half of this fiscal year. 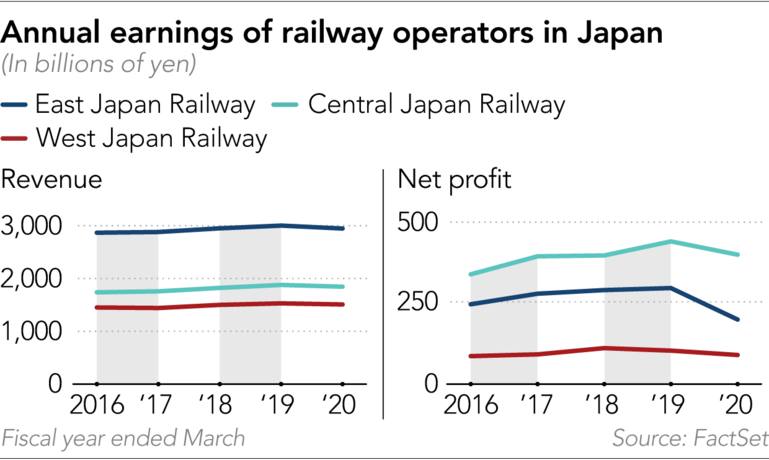 "We expect the strength of the recovery in business related passenger demand ... could be sluggish compared with before COVID-19, as telecommuting and phone or video conferencing ... becomes established, worsening earnings at Japanese companies and leading to reductions in business travel budgets." Osaka estimated in a report that business demand accounts for 42% of railway travel in Japan.

But SMBC's Kawashima suggested the coronavirus will have little impact on the companies' long-term strategy of strengthening railway operations and investing in real estate.

Particularly for JR Central, a planned increase in the frequency of Nozomi bullet train service is expected to support "steady growth after the novel coronavirus calms down," Kawashima said in a report.