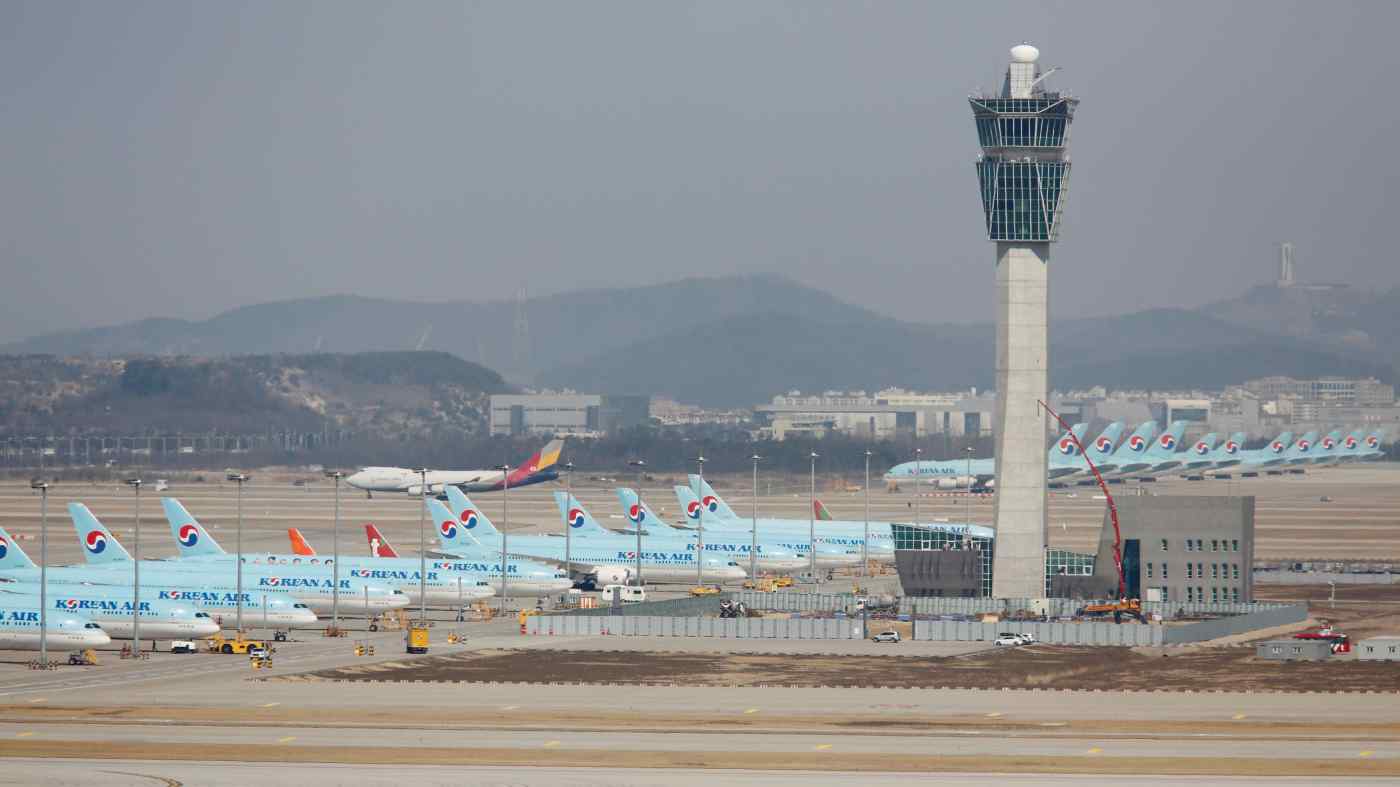 BANGKOK -- The air space above Asia is quickly becoming jetliner-free now that airline operators are grounding most of their planes, and in some cases entire fleets, as the coronavirus crisis rages and demand plunges. In seven economies that have imposed lockdowns or border control measures, over 1,000 airplanes are now parked on tarmacs.

The pandemic is hopscotching the globe, mostly leaving China for Europe, the Middle East, the United States, and now South and Southeast Asia. A number of countries are experiencing explosive growth in the number of new infections, including some of China's neighbors who thought they dodged a bullet when the crisis did not immediately impact them in a big way.

Now South and Southeast Asian governments are beginning to take strict measures, severely limiting the movement of people. India, which had 536 confirmed cases as of Tuesday, has adopted the strictest anti-virus crackdown. As of Wednesday it is not allowing any commercial passenger flights to operate domestically.

The decision ban domestic flights came on Monday, a day after all inbound international flights were prohibited. The flight ban is meant to keep India from importing new infections and to halt the spread of the virus that is already taking place in the country. 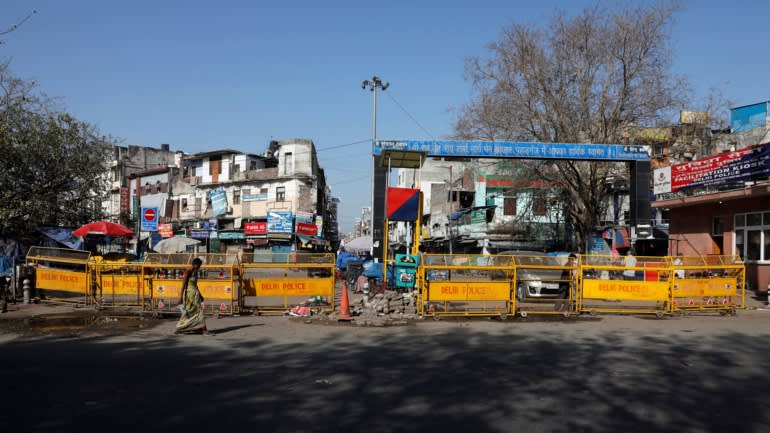 A woman walks past police barricades on March 25 in New Delhi. The Narendra Modi government has imposed a three-week lockdown on the nation of 1.3 billion.   © Reuters

Airplanes have become an important means of transportation for Indians who need to travel around the vast country and internationally. India's major carriers -- including InterGlobe Aviation's IndiGo, state-owned Air India, Spice Jet, AirAsia India and Vistara -- operate more than 500 planes. Now their fleets, with the exception of cargo planes, sit idle.

Late Monday night, Singapore began prohibiting all short-term visitors from entering the city or transiting through it. Also on Monday, the government announced that beginning on Friday all travelers, including residents and long-term visitors, must submit health declarations when returning from abroad.

The tiny nation of 5.6 million had 558 confirmed cases as of Tuesday.

The Singaporean government's clampdown on travelers will be a major hindrance to the flow of people throughout Asia as Changi International Airport is a major hub.

It will also hurt carriers and their suppliers. On Monday, Singapore Airlines announced it will cut 96% of its capacity through the end of April, grounding 138 of its 147 aircraft. The company said it "is engaging in discussions with several financial institutions for its future funding requirements." It is also negotiating with aircraft makers to defer upcoming deliveries.

On Sunday, Thailand began requiring foreign nationals entering or transiting in Thailand to present health certificates showing they have not been sick for the previous 14 days and that they have tested negative for the virus within the previous three days.

On Thursday, the kingdom falls under a state of emergency.

The country's airlines are also in pain. Thai Airways International on Tuesday announced it has ceased flight services within the Asia-Pacific region and to Europe, excluding Munich and Zurich. It is also handing its domestic routes connecting Bangkok to Chiang Mai, Phuket and Krabi to wholly owned subsidiary Thai Smile. 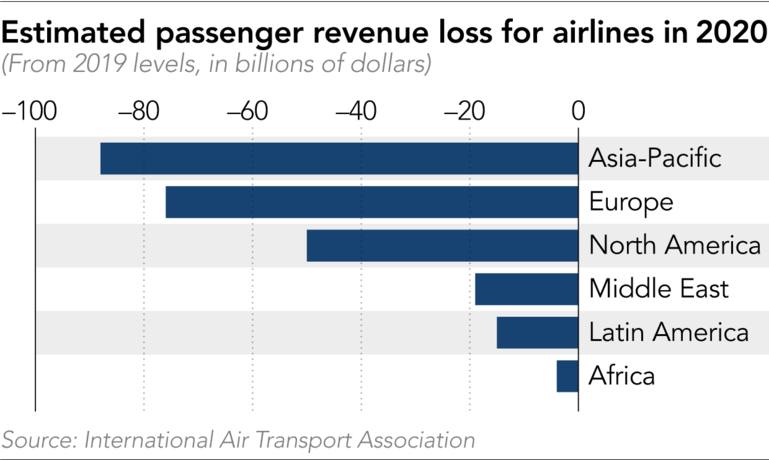 According to the state-owned airline operator, the group had 103 active airplanes at the end of 2019, 83 belonging to Thai Airways and 20 to Thai Smile. The suspensions, which are scheduled to last until the end of May for most of the routes, are likely to result in the grounding of most of the 83 aircraft. Thai Airways also has 12 other airplanes undergoing heavy maintenance.

On Monday, Thai Smile suspended all of its international routes.

The other two budgets airlines based in Thailand are also looking for parking places. Thai AirAsia has suspended international flights through April 25, and Thai Lion Air has stopped flying internationally until April 30.

The Philippines widened its monthlong lockdown in the capital region to the whole of Luzon Island. Its national flag carrier Philippine Airlines said on Tuesday that it will put international flight operations on pause beginning Thursday. It has already halted domestic flights.

Malaysia has prohibited foreigners from entering the country and banned Malaysians from leaving it. Malaysia Airlines has reacted by significantly reducing its flights. In East Asia, Korean Air President Woo Kee-hong said earlier this month that his carrier had grounded about 100 of its 145 passenger aircraft.

While these steps might or might not halt the killer virus, they will hamper the very nations that are taking them, especially Singapore and Thailand, which have been big beneficiaries of the global flows of people and goods.

The International Air Transport Association on Tuesday predicted that the industry's passenger revenues could plummet $252 billion, or 44%, below 2019's global total. That is more than twice as much as what the association predicted less than three weeks earlier, that $113 billion in revenue would be wiped out.

The latest analysis expects Asia to be the hardest-hit region, suffering an $88 billion loss, followed by Europe and a $76 billion drop-off.

Even after the pandemic ends, the region will be so badly damaged that it will have difficulty building back up to where it was at the end of 2019, when a mysterious pathogen making people sick in the Chinese city of Wuhan was only beginning to seep into the news.

"Many of the stronger companies have sufficient capital structures to withstand a one- to two-month grounding," Moody's Investors Service said in a report issued on Friday, "but few can withstand five to six months or more. Hong Kong International Airport on March 24. The coronavirus pandemic and governments' efforts to tackle it have evaporated the global pool of passengers.   © Reuters

"Most companies will emerge from the crisis with weaker credit fundamental that may not be readily restorable to pre-coronavirus levels for some time, if at all."

The report urges governments to provide financial support to hard-hit airlines that might not otherwise survive.

Governments did not need the prodding. Airport Authority Hong Kong on Monday evening announced a new relief package of 1 billion Hong Kong dollars ($129 million) for the airline sector. This came immediately after Chief Executive Carrie Lam issued new anti-coronavirus measures, including the denial of entry to all non-Hong Kong residents arriving from anywhere outside of mainland China, Taiwan and Macao. The ban takes effect late tonight and is to be in place for two weeks.

According to the Hong Kong International Airport operator, the aid package is targeted at the aviation industry, airport retail tenants and restaurants, and airport staff. The industry is to receive the largest slice, around HK$630 million. The package also exempts carriers from parking and air bridge fees for their idle passenger aircraft for five months, reduces passenger aircraft landing charges by 40% for four months, and waives or reduces other tolls.

The funding comes from the Hong Kong government waiving HK$670 million in air traffic control fees for the airport for the fiscal year that ends this month, complemented with the airport's own treasury.

Cathay Pacific Airways, whose group was operating about 230 aircraft at the end 2019, welcomed the latest round of measures, which comes on top of two earlier rounds of relief totaling HK$1.6 billion, the first of which was implemented in September.

The territory's flagship airline, however, says it is not enough. A company spokesperson told the Nikkei Asian Review in an emailed response on Tuesday that "we are of the view that significantly more much-needed immediate assistance, which is commensurate with the scale of this crisis, still needs to be provided." The airline believes it is up against "continued substantial challenges facing the home carriers in Hong Kong with tightened travel restrictions worldwide."

The question is whether Cathay Pacific is going to consider hastening the implementation of the new "skeleton schedule" announced on Friday. The company said it would cut its full-service passenger flight capacity, operated by Cathay Pacific and Cathay Dragon, by 96% during April and May. Its budget carrier, Hong Kong Express, has already halted all flights until the end of April. The spokesperson sighed, "We will continue to monitor the developments."