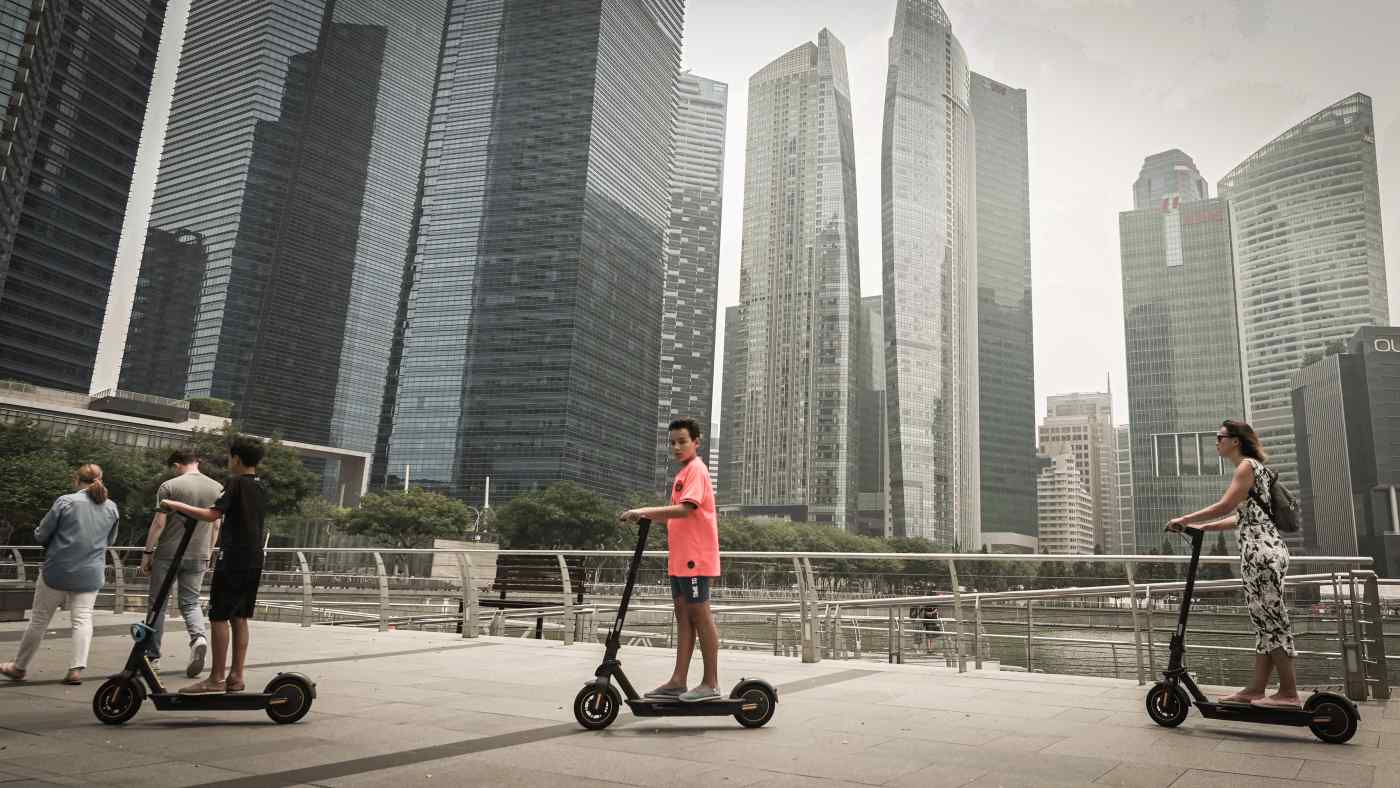 After Singapore banned the use of e-scooters on its public roads and footpaths on Tuesday, offenders face fines, and even jail time, if they break the law. (AFP/Jiji)
DYLAN LOH, Nikkei staff writerNovember 8, 2019 15:18 JST | Singapore
CopyCopied

SINGAPORE -- Long proud of its infatuation with rules -- no chewing gum, no long hair, no spitting, no feeding the monkeys -- Singapore stunned mobility operators this week by banishing electric scooters from its footpaths.

The restrictions came into effect on Tuesday after lawmakers decided to limit the use of the personal mobility devices following a spate of collisions involving e-scooter drivers and pedestrians causing numerous injuries, as well as the death of an elderly woman.

While e-scooters will still be allowed on cycling paths and networks connecting Singapore's various parks, public roads and pedestrian walkways will be off-limits. Offenders now face fines, and even jail time, for errant use of e-scooters.

"It is a necessary step for pedestrians to feel safe again on public paths, while still allowing e-scooters to grow in tandem with cycling path infrastructure,'' Dr Lam Pin Min, senior Minister of State for Transport, told parliament this week, adding that it was a difficult decision.

Telepod, which provides e-scooters to food delivery platforms and other businesses, expressed concern at the impact of ban on Singapore's 100,000 scooter owners, as well as retailers and mobility sharing operators.

"Because of these new rules, the delivery companies have to think of another transportation mode for all the delivery-men," the startup's chief marketing officer Chan Jit Yen told the Nikkei Asian Review.

Telepod said it has had to put on hold its partnership with meal delivery operator Foodpanda, until it can work out how to operate under the new environment.

Chan said Telepod will now focus on how it can grow its operations in foreign markets including Indonesia, Malaysia and Japan, where rules are not as onerous. She said that would also help minimize the impact of the new law on the company's bottom line.

GrabFood, another major meal delivery operator, warned that wait times for consumers could get longer due to the new e-scooter restrictions, and Neuron Mobility, an e-scooter solutions provider, said the new regulatory framework would make it even more challenging to develop its business in Singapore.

Describing the ban as unfortunate, Neuron Mobility chief executive Zachary Wang told Nikkei that it was now "legally not possible for us to run any business in Singapore."

"The ball is not even in our court," Wang said. Like Telepod, Wang said his company would now focus on expanding outside Singapore in countries like Thailand and Australia.

Shared e-scooter service player Beam said that while it wasn't giving up on Singapore yet, the regulatory uncertainty meant that the company would not be able to commit to making the city-state a huge part of its business portfolio.

"We should be disappointed that we cannot get to operate in Singapore in the way that we want - we view Singapore as an exciting market," Christopher Hilton, vice president of corporate affairs, told Nikkei.

Hilton said the ban would force Beam to look more closely at operating a business model for shared e-scooters in areas where they are still allowed for use, such as parks, as well as expanding its overseas operations.

"You see these vehicles being moved from footpaths onto the roads in cities all over the world - Berlin, Paris, Los Angeles and Washington. And it seems like that makes sense for a country like Singapore," Hilton said.

Walter Theseira, associate professor at the Singapore University of Social Sciences, said that Singapore may have to consider granting special provisions to people whose livelihoods depended on e-scooters.

"The challenge there is - would implementing such a system look like a climb down or backing off, in terms of policy? Because I think the one thing you don't want to have, is the appearance of policy inconsistency," Theseira said.