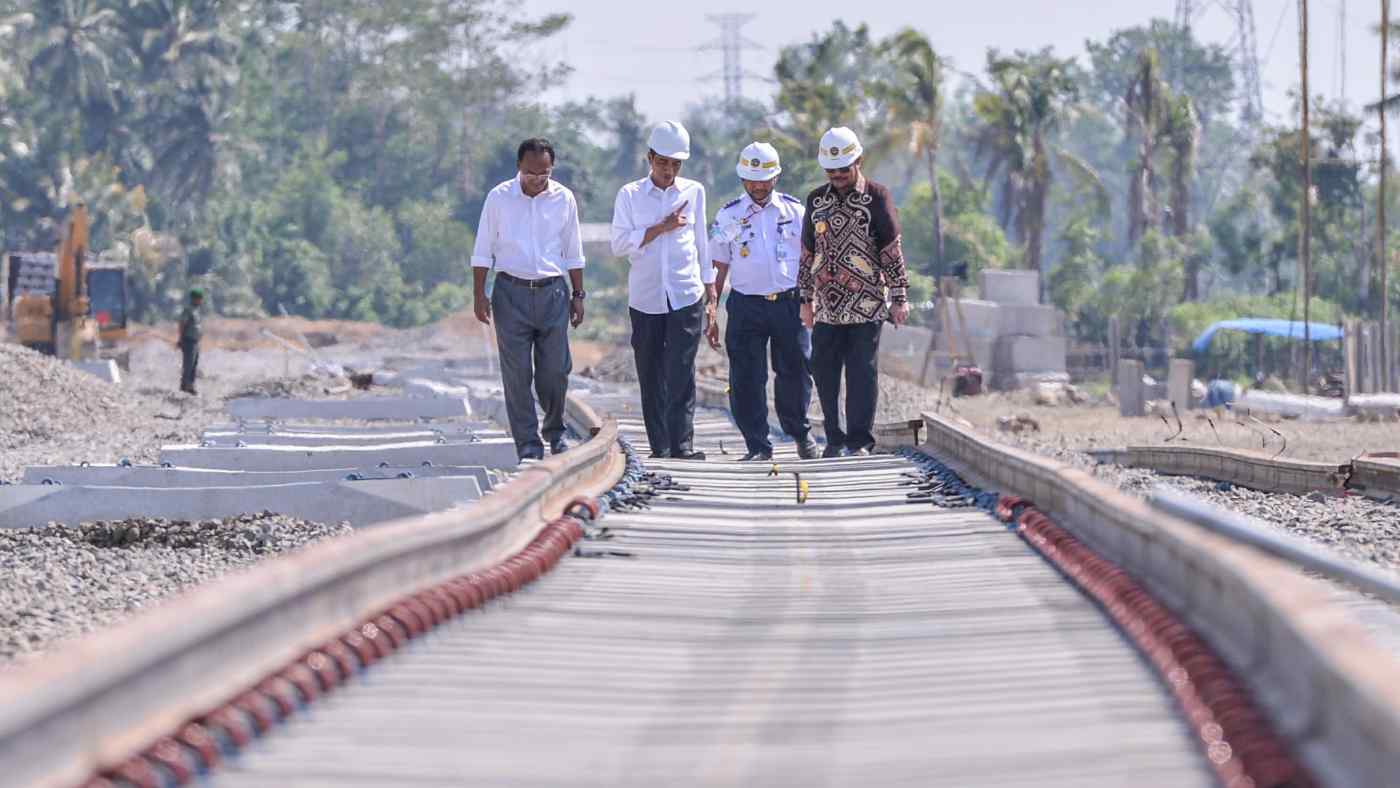 Indonesian President Joko Widodo, second from left, in November 2015 inspects a section of track that is part of a landmark railway project on the island of Sulawesi.   © Presidential Palace/AFP/Jiji
ERWIDA MAULIA, Nikkei staff writerJune 7, 2021 14:23 JSTUpdated on June 7, 2021 18:42 JST | Indonesia
CopyCopied

JAKARTA -- A long-delayed project to construct the first railway on the Indonesian island of Sulawesi is gaining traction, with contractors securing 693.8 billion rupiah ($48.5 million) in an Islamic law-compliant syndicated loan led by Bank Syariah Indonesia.

The financing agreement is for the construction of a 145 km system encompassing five municipalities and regencies in South Sulawesi Province. It will connect the provincial capital Makassar, the largest city on the eastern Indonesian island, with the town of Parepare. Commercial operations are targeted to start next year.

The line is the first phase of a grand, long-term plan to develop a 2,000-km trans-Sulawesi rail network that will enable travel from Makassar on the southern tip of the island to Manado at the northern end. Sulawesi, characterized by elongated peninsulas and historically known as the Celebes, is the world's 11th-largest island.

"The Makassar-Parepare railway will ... help meet demand for transport of passengers and goods and support national connectivity," state-owned construction company PP Persero said in a news release on Thursday, the day the financing agreement was signed. "The project ... is expected to help accelerate national economic growth, especially for people in South Sulawesi."

PP Persero is part of the Celebes Railway Indonesia consortium established in 2019 to continue carrying out the scheme. It includes the local unit of China Communications Construction Company.

Construction, which began in 2015, was previously overseen and funded by the transportation ministry. The private consortium took over in 2019 and the project is now classified as a public-private partnership.

Despite being included in the list of so-called national priority projects, construction has been hit with delays to the previous operational commencement target of 2018. Local media reports have cited land acquisition problems, while progress has also been slowed by the coronavirus pandemic. The total cost for the Makassar-Parepare leg is estimated to reach at least 8.2 trillion rupiah.

It is part of President Joko Widodo's infrastructure push that includes numerous projects to boost connectivity in the underdeveloped eastern half of the nation that consists of more than 17,000 islands.

Railroads in Indonesia date back to when the country was a Dutch colony. Across the vast archipelago, rail transport is available only on the smaller though densely-populated island of Java as well as via limited services in a few parts of Sumatra. The government also has plans for a 53-trillion rupiah rail project in eastern Kalimantan -- the Indonesian part of Borneo island, shared with Malaysia and Brunei -- though it has gone nowhere.

BSI in a separate news release said other members of the loan syndicate for the Makassar-Parepare rail project are state-owned infrastructure financing company Sarana Multi Infrastruktur and its subsidiary, Indonesia Infrastructure Finance.

It is one of the first major infrastructure projects that BSI has channeled loans to since its establishment as the merged entity of three state-owned lenders abiding by Islamic law, or Shariah, in February.

In contrast to the slow pace of railway construction, the government has been aggressive in pursuing the building of new roads nationwide. Other large-scale infrastructure initiatives include a China-backed high-speed railway connecting Jakarta with the West Java capital of Bandung, the Japan-funded Patimban deep sea port, also in West Java, and more recently a landmark $32 billion project to move the country's capital from congested Jakarta to East Kalimantan Province on Borneo in 2024.