Thai Airways planes sitting idle at Suvarnabhumi Airport in Bangkok. A bankruptcy court will decide whether to give the green light to the carrier's rehabilitation process next month.   © Reuters
MASAYUKI YUDA, Nikkei staff writerAugust 25, 2020 10:11 JSTUpdated on August 25, 2020 18:28 JST | Thailand
CopyCopied

BANGKOK -- Thai Airways International will have to endure a massive overhaul of its business and management for years to come in a rehabilitation process under the court's supervision, after the COVID-19 pandemic sent the national carrier into deeper debt.

The final day of initial hearings at the Central Bankruptcy Court took place on Tuesday. The airline's board members and its consulting partner EY Corporate Advisory Services will attend court as witnesses, facing lawyers representing creditors.

The court said it had gained enough information from witnesses to give a verdict, according to local media, but it will allow seven days for parties to file an objection. If there is no objection, the court will decide on Sept. 14 whether to give the green light to the cash-strapped carrier's rehabilitation strategy. This will be formulated by nominated planners, who include the board members and the consultancy.

Why did Thai Airways enter rehabilitation?

The airline has been in financial trouble even before coronavirus struck. Thai Airways recorded net losses for seven of the past 10 years. This was in large part due to unprofessional management involving ex-Royal Thai Air Force officers, strident unions and an inefficiently employed fleet.

The novel coronavirus pandemic dealt a final blow to the airline. The Civil Aviation Authority of Thailand implemented a landing ban on all international flights from April to July, effectively grounding Thai Airways.

The ban was eventually lifted, but travel restrictions into the country meant that the tourism industry continued to suffer. The airline recorded a net loss of 28 billion baht ($900 million) for the first half of 2020. The loss had ballooned 4.4-fold from a year ago.

The court's decision on Tuesday will pave the way for the carrier to officially start drawing up its own rehabilitation plan.

The plan is expected to be submitted to creditors and the court for approval next year. It needs the endorsement of holders of 50% of the airline's debt at least. Rehabilitation administrators will be able to begin restructuring in May or June 2021, if the process goes smoothly. The airline will be given five years to rehabilitate with an option to extend by two years.

What should the rehabilitation plan include?

The plan should include a thorough review of its fleet and routes on their profitability.

Some industry observers have characterized Thai Airways' fleet as objects in a museum. The mish mash collection of Boeing 747-400s, Airbus A330s, Boeing 787-9s and Airbus A380s reflects inefficiencies that Thai Airways has not been able to iron out. Different models have different engines and specifications, forcing the airline to train its engineers for each configuration, inflating maintenance costs.

Some planes are outdated and gas-hungry. On Aug. 13, aviation consultancy Cirium pointed out that airlines tend toward using newer aircraft during this early phase of reopening borders. With fewer passengers expected, Thai Airways should shift to use newer and more efficient planes.

Under former president Sumeth Damrongchaitham, the airline did have a plan for fleet renewal, which would have required a massive financial outlay. The plan was scrapped as the company's worsening financial condition led to Sumeth's resignation.

Plane purchases also allegedly became a source of corruption in the past for some Thai Airways staff. Some employees became unusually rich from a procurement deal involving 10 Airbus A340s, according to an investigation team from the Transport Ministry. Such behavior must be rooted out during the rehabilitation process. 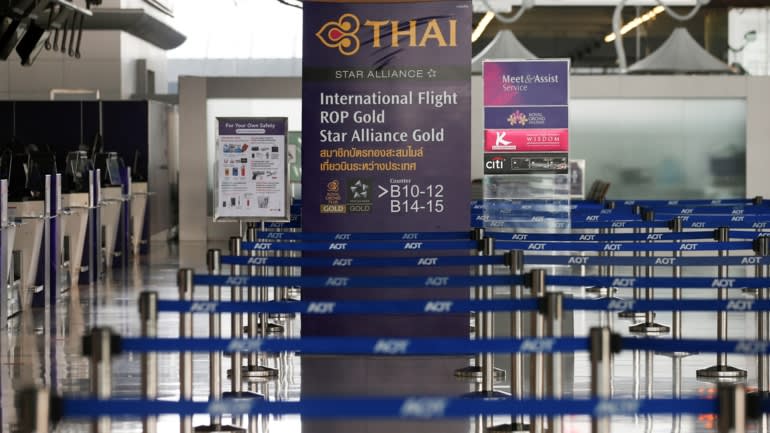 Check-in counters for Thai Airways at Suvarnabhumi Airport in Bangkok are empty in this April 30 photo. The coronavirus pandemic dealt a final blow to the long-troubled airline.   © Reuters

Thai Airways must also consider ending loss-making routes. The aviation industry expects a faster recovery in domestic flights over international ones as many countries still have travel restrictions in place. This could be a problem for Thai Airways as it mainly operates international routes.

Will the airline be able to carry out its rehabilitation plan without hindrance?

Thai Airways was operated as a bureaucratic state enterprise presided over by officials who prioritized power-grabbing over tackling structural problems and improving profitability. The new board must not behave in this way.

Management was inconsistent as president and board members, especially those who tried to streamline the company, often came and went for political reasons. Piyasvasti Amranand was the clearest victim of all. Despite helping the airline narrow its deficit in 2009 when he was the company's president, directors suddenly voted him out in June 2012, in what was seen as a politically motivated ballot.

Unprofessional board members, assigned from the Royal Thai Air Force, often complicated problems. Unions, on the other hand, were seen as overpowerful and under the protection of the state. "At times, senior captains were getting paid more than the president of the company," a former board member told the Nikkei Asian Review.

The Ministry of Finance divested a portion of its Thai Airways shareholding in May, so that it was no longer a state enterprise. The move terminated worker privileges, including the right to form a union. This will allow the rehabilitation plan to include bigger layoffs and wage cuts.

The loss of state enterprise status led to a recall of more than 50% of Thai Airways' check-in counters and aircraft stands at Suvarnabhumi Airport by the Airports of Thailand. "The carrier is treated just like any other commercial airline," said Deputy Prime Minister Wissanu Kreangam. Opening the airline to competition should pressure it to rehabilitate.

Will Thai Airways be able to raise funds through its rehabilitation?

Filing a petition for rehabilitation gave Thai Airways an automatic stay for its debt repayments. This saved the airline from an imminent risk of going bust. Yet, it still needs to raise money for rehabilitation.

The company's shareholders' equity turned negative, at minus 18.1 billion baht, as of June. While its total liabilities ballooned to 332.1 billion baht, a 36.7% increase from the end of 2019, its cash and cash equivalents fell by 35.5% to 13.9 billion baht. Piyasvasti, who now serves as an independent director said on Aug. 17 that the airline is estimated to need about 60 billion baht of working capital a year during the rehabilitation process. Local media reported that Thai Airways will have to pay the pensions of more than 1,600 employees -- as state enterprise workers -- which is worth 5.4 billion baht over the next 13 years.

Several financial institutions have shown their willingness to extend financial support, according to Piyasvasti. It could also raise money through issuing new shares, but the government must not participate, as increasing its holdings to over 50% will revive the airline's state enterprise status.

Will the global environment be conducive for its rehabilitation?

A quick recovery from the pandemic-induced travel disruption is unlikely. The International Air Transportation Association, or IATA, said global air traffic will not return to pre-pandemic levels until 2024.

It expects the number of global passengers to decline by 55% this year from 2019. "Passenger traffic hit bottom in April, but the strength of the upturn has been very weak," said IATA CEO and Director-general Alexandre de Juniac.

The Tourism Authority of Thailand said revenue from international visitors in 2021, under its base-case scenario, could shrink to 618 billion baht, or about 32% of the 1.9 trillion baht recorded in 2019. The revenue falls to 298 billion baht in its worst-case scenario.