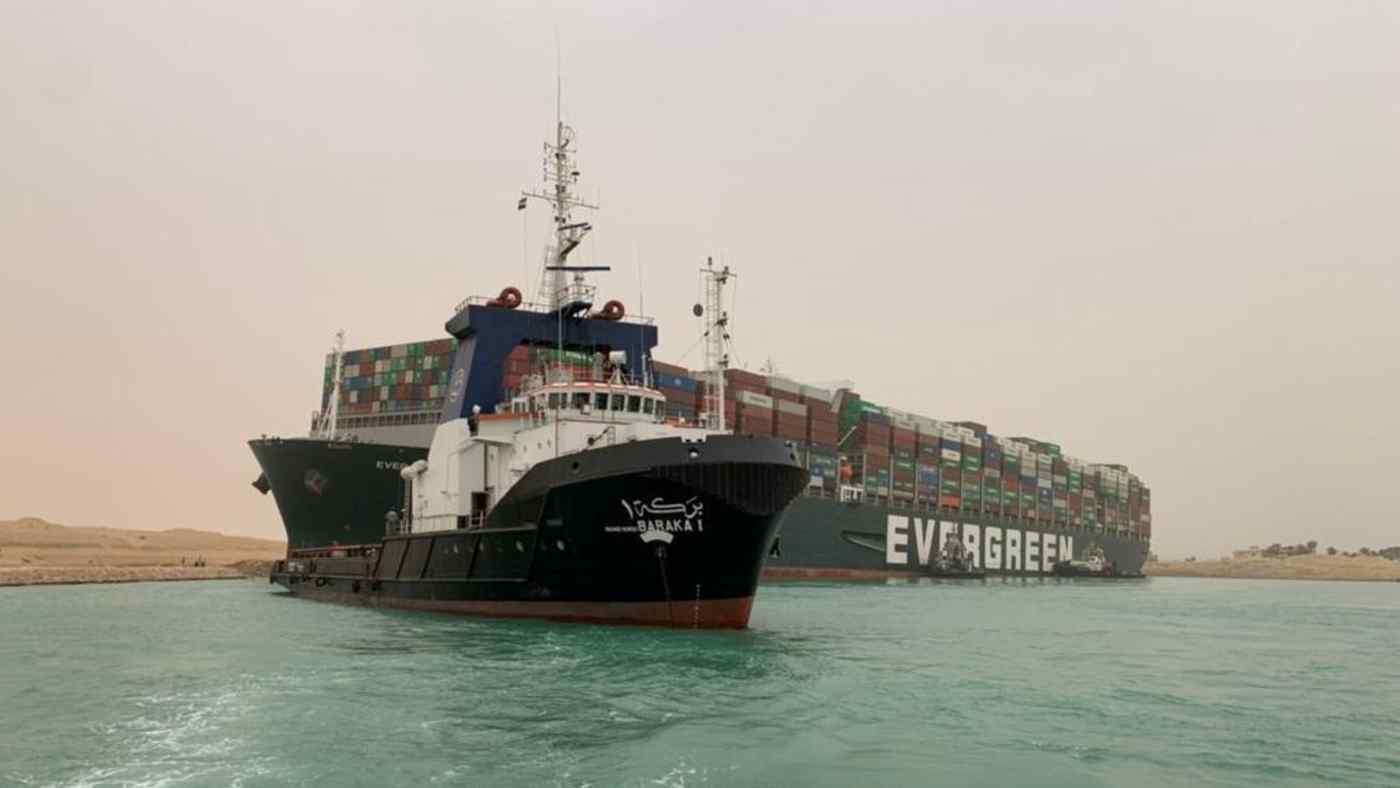 A container ship, which its operator said was hit by strong winds, ran aground in the Suez Canal.   © Suez Canal Authority via Reuters
March 24, 2021 18:47 JST | Middle East
CopyCopied

CAIRO (Reuters) -- Eight tug boats were attempting on Wednesday to free a 400 m (440-yard) long container ship that ran aground in the Suez Canal, blocking vessels passing through one of the world's most important waterways, the authority that runs the canal said.

The 224,000-tonne Ever Given was stranded on Tuesday morning after losing the ability to steer amid high winds and a dust storm, the Suez Canal Authority (SCA) said in a statement.

The authority said it was sparing no effort to ensure regular navigation through the canal, but it was unclear how soon the vessel would be free and sources said delays to shipping were expected.

About 12% of world trade by volume passes through the canal connecting Europe and Asia. The canal remains a major source of hard currency for Egypt.

Bernhard Schulte Shipmanagement (BSM), the ship's technical manager, said the Ever Given, one of the largest container ships in the world, ran aground in the canal at around 05:40 GMT on Tuesday. It said an investigation was underway.

Tracking maps showed the ship grounded in the southernmost stretch of the canal, near the Red Sea port of Suez.

The Canal Authority said it had issued a message of reassurance regarding "navigational movement through the canal and its return to regularity through the course of the original canal."

The canal was expanded with a parallel waterway on part of its length in 2015, north of where the Ever Given is stranded. Two senior Egyptian marine sources said some traffic would be diverted but it was unclear that this could free up congestion.

Taiwan's Evergreen Marine Corp, which is leasing the vessel under a time charter, said the shipowner had informed the company that the ship "was suspected of being hit by a sudden strong wind, causing the hull to deviate from waterway and accidentally hit the bottom and run aground."

BSM, which handles the ship's crew and technical issues, said all the crew are safe and accounted for and that there have been no reports of injuries or pollution.

BSM has notified the authorities and "interested parties" but said it could not confirm the ship's owner.

Port agent GAC said on Wednesday on its website that 15 other ships in the northbound convoy behind the Ever Given were detained at anchorages waiting for the canal to be cleared. A southbound convoy was also blocked.

A growing number of tankers have gathered near the entrance to the canal, waiting to pass through.

Asia-Europe container trade flows are picking up again after the Lunar New Year so an extended blockage would have severe consequences as the alternative route via the Cape route will be a week slower, said Tan Hua Joo, a consultant with Liner Research.

Any delays will exacerbate the shortage of container ships and boxes, as 30% of global container ship capacity passes through the Suez, according to data from Liner Research Services.

"It increases the risk that we might see additional port congestion in European ports in the next week," said Lars Jensen, chief executive at SeaIntelligence Consulting.

"When the canal reopens, this will mean that the delayed cargo will now arrive at the same time as cargo behind it which is still on track."

The impact on oil and gas flows will depend on how long it takes to clear the container ship, the sources said.

As of Wednesday, five laden liquefied natural gas (LNG) tankers were unable to pass through the canal due to the grounded container ship, according to data intelligence firm Kpler. Of the five, three were bound for Asia and two for Europe, said Kpler analyst Rebecca Chia.

She said that if the congestion persists until the end of this week, it would affect the transit of 15 LNG tankers.