TOKYO -- Foreign airlines are calling out a double standard over new landing approaches at Tokyo's Haneda International Airport, which say they pose a serious safety risk, after All Nippon Airways and Japan Airlines were apparently given a headstart.

Starting March 29, new routes will be used to expand air traffic over central Tokyo following an agreement with the U.S., which maintains an air base in the area. To stem noise pollution from the busier skies, transport ministry officials have ordered planes to descend at steeper angles.

However, at a March 2 meeting at the ministry for airlines to address the new routes, pilots and airline administrators expressed confusion and anger over the changes. Officials repeatedly heard comments such as "The ministry should show a plan that's uniform for everyone," and "What is equipment that can't handle the new method supposed to do?" from people in attendance.

The root of confusion is the existence of two angles of descent -- 3.45 degrees and 3 degrees.

The International Civil Aviation Organization recommends planes land at a 3-degree angle to guarantee both safety and acceptable levels of noise pollution. Landing at greater than 3 degrees is permitted when there are mountains or high-rise buildings in the area, and at airports for small and medium-sized aircraft. 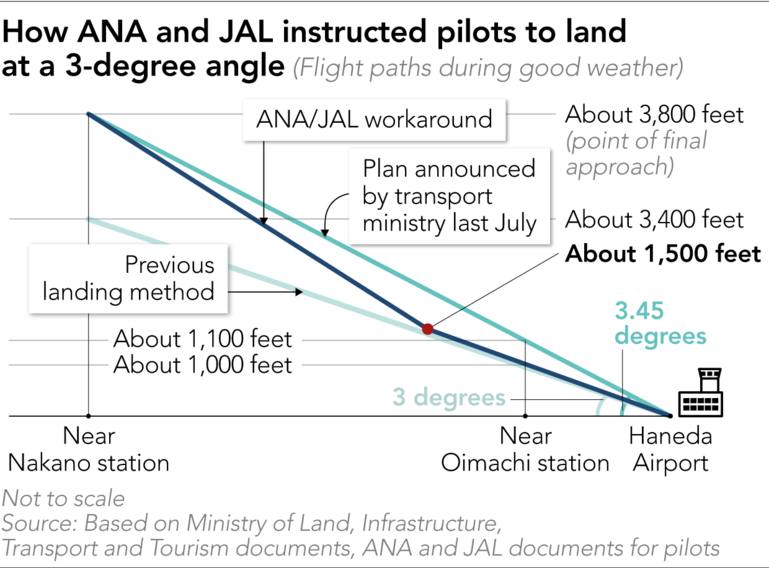 In its effort to reduce noise pollution in anticipation of increased flights, the transport ministry last summer announced it was considering raising the angle of descent for new routes to 3.45 degrees in good weather. This decision increased landing difficulty, but the plan was made official in December without public debate.

A pilot industry group, the International Federation of Air Line Pilots' Associations, voiced concern about the change in a January letter, saying the steeper angle will "potentially lead to increased occurrences of hard landings and long landings."

These concerns appeared to prove true when, during a trial run last month, an Air Canada plane was unable to land at 3.45 degrees, and instead landed at Narita Airport, about 60 km east of central Tokyo. U.S. carrier Delta held off joining the tests as it had not finished preparing for them. Many airlines seem to have insufficient training in simulators.

However, it appears at least two Japanese airlines discovered a workaround to the situation. ANA and JAL argued to the transport ministry that if planes start to descend at more than 3.45 degrees, but from 1,500 feet finish their descent along the normal 3-degree flight path, the problems of a steep landing angle and increased noise pollution would be solved.

According to public documents requested and obtained by Nikkei, as well as sources familiar with the situation, the ministry allowed the airlines' planes to use this approach last summer.

ANA Holdings unit ANA and JAL presented the proposed method to pilots in accordance with their agreement with the transport ministry. But overseas airlines, upon realizing this, are in a rush to follow in the two companies' footsteps. The transport ministry lacks consistency. They stressed the need of 3.45 degree landings at the meeting on March 2. But after Kazuyoshi Akaba, the transport minister, met with pilots from ANA and JAL on March 4, the ministry said it would be possible for airlines to use the workaround method.

In this instance, too, overseas carriers were left out of the loop. Without consistent rules, airlines are unable to develop frameworks for stable operations, including fixing their landings and dealing with warning systems.

"When you need to make an emergency landing, you have to think that you'll be moved from Haneda to another airport," said a pilot who flies in and out of Narita Airport.

For airlines, a return to the usual landing method would be best, but the transport ministry is not planning to give up on the 3.45 degree method. While the ministry seems to be using noise pollution as an excuse for the change, some analysts say not much will change on the ground.

"It wouldn't reduce noise more than about 2 decibels," said Toshihito Matsui, a professor at Hokkaido University who specializes in noise pollution. "You wouldn't be able to tell the difference."

Instead, people familiar with the situation point to nearby U.S. military presence as the real reason for the change. Just before moving into the landing position, planes sometimes cross into the airspace of the Yokota air base. To avoid any potential collisions, incoming aircraft need to ascend to high altitudes. If ANA and JAL's airplanes are landing differently, it could be said to be a victory over this issue.

"All I can say is that planes will cross into Yokota air space, and the Japanese side will be responsible for controlling them," a senior transport ministry official told Nikkei, without clarifying the relationship between the U.S. military presence and the change in the angle of descent.

The new routes will increase Haneda's annual international arrivals and departures from 60,000 to 99,000. If the transport ministry does not clear up the situation and confusion among the airlines continues, demand among tourists to come to Japan, to say nothing of Haneda's position as an internal hub airport, may be in trouble.