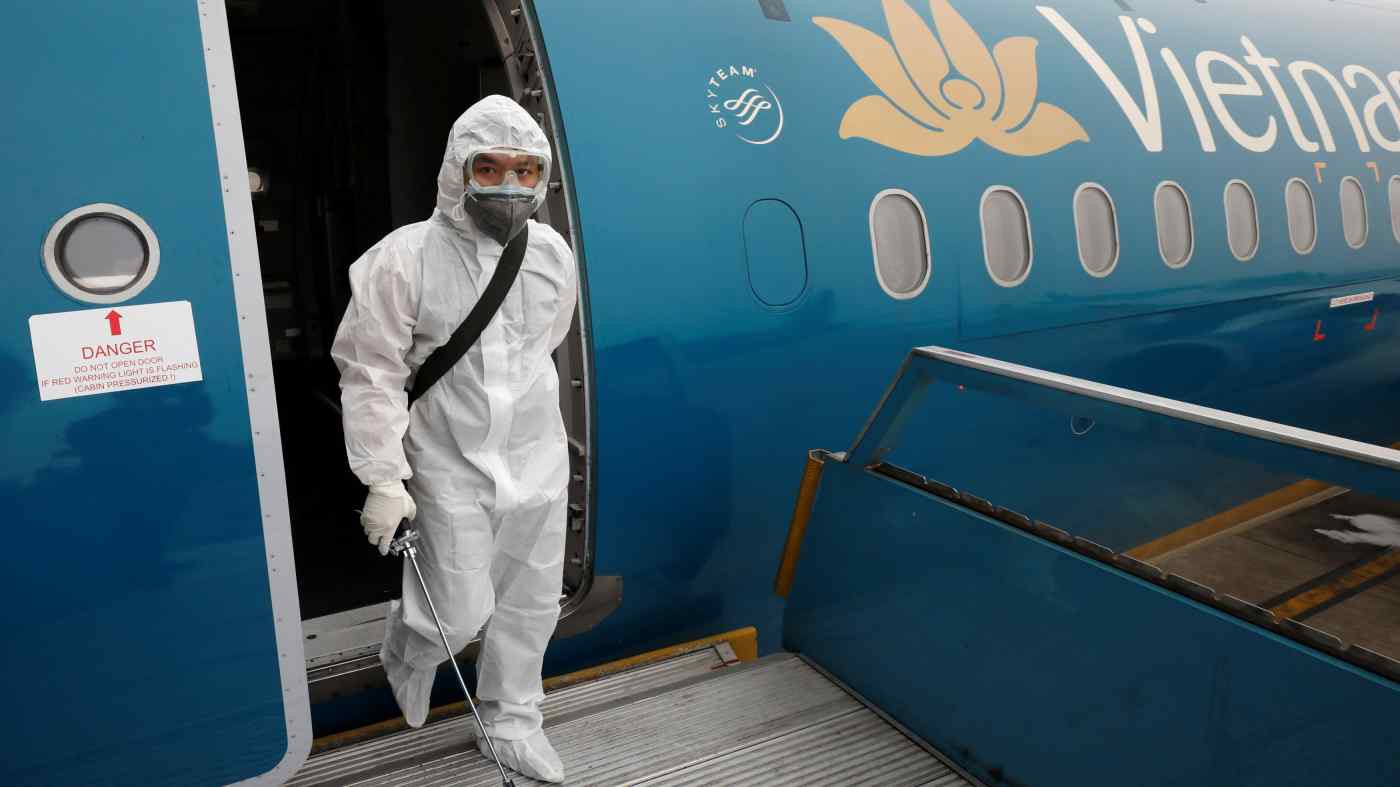 A worker disinfects a Vietnam Airlines plane. Lawmakers have passed a 12 trillion dong package to rescue the airline which has been hit hard by the coronavirus pandemic.    © Reuters
TOMOYA ONISHI, Nikkei staff writerNovember 17, 2020 23:29 JST | Vietnam
CopyCopied

"Vietnam Airlines is working on a restructuring plan. It will submit the plan to the government soon," said Nguyen Hanh Phuc, chairman of the Office for the National Assembly.

Like airlines across the world, Vietnam's national carrier has been hard hit by the travel slump brought on by the COVID-19 pandemic.

The rescue plan allows the State Bank of Vietnam, the country's central bank, to refinance and extend credit deadlines, but no more than twice, for the airline.

The carrier will issue 8 trillion dong of new shares to existing shareholders. State Capital Investment Corp., the holding company of state-owned enterprises, will buy 85% of those new shares on behalf of the government, according to the agenda issued last week ahead of deliberation, and a note posted on the National Assembly website on Tuesday.

The remainder of 4 trillion dong will be made up of soft loans. Further details of the rescue package as well as the carrier's restructuring plans were not made available to the press.

CEO Duong Tri Thanh in July told the government that the airline would have difficulty sustaining its business without 12 trillion dong in emergency funds by the end of August.

Vietnam Airlines reported a loss of 10.7 trillion dong in the first nine months of this year. Trinh Hong Quang, Vietnam Airlines deputy director, said in a meeting earlier this month that the company was trying to keep losses to below 13 trillion dong this year but expects similar hemorrhaging in 2021 if international aviation fails to recover.

It is hoped that existing investors, including ANA Holdings, will pick up the rest, a local analyst said. But ANA Holdings itself is facing a similarly bleak future. The Japanese airline expects to post its worst-ever net loss, of 500 billion yen ($4.74 billion), for fiscal 2020.