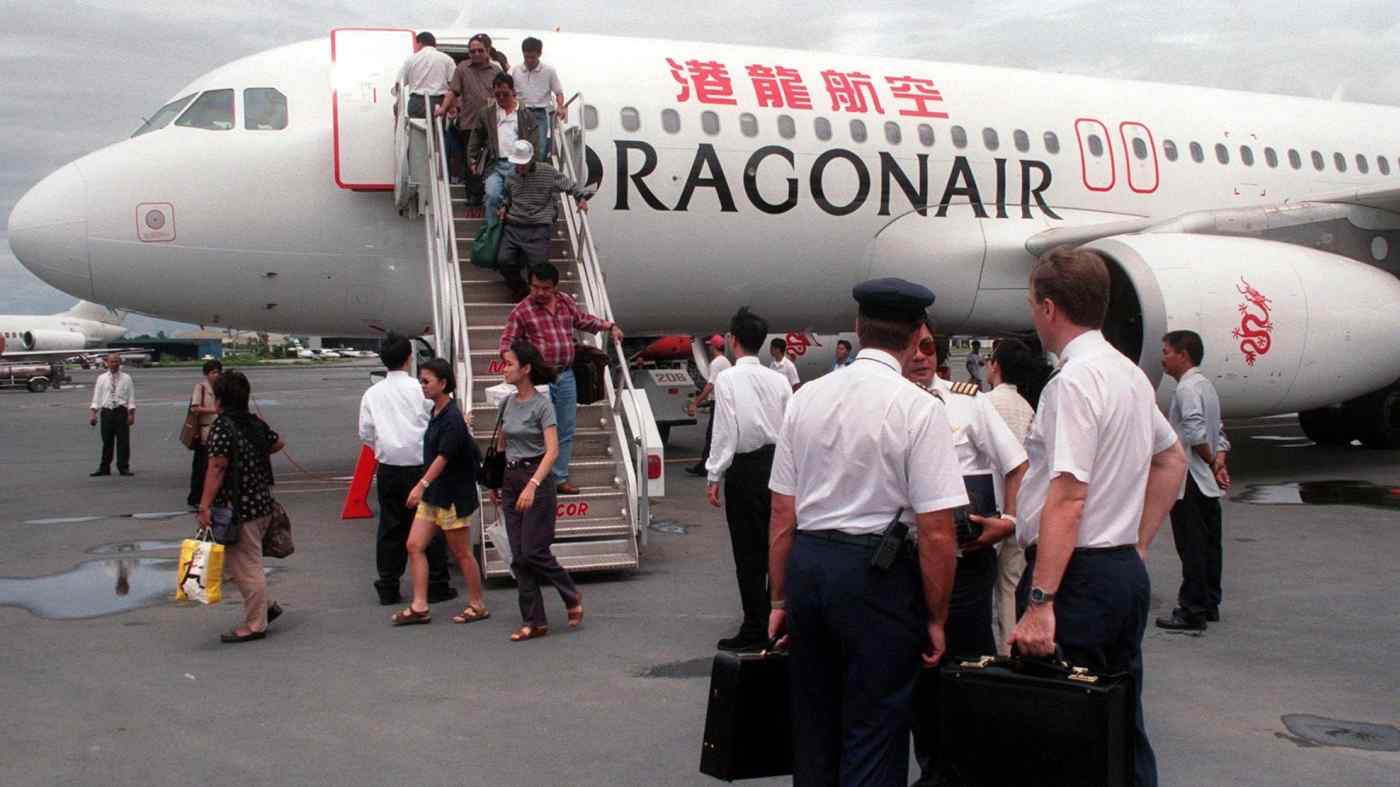 A Dragonair jet in 1998. Cathay Pacific said on Oct. 21 that it would shut down Cathay Dragon as a separate unit as part of a restructuring plan that involves cutting 8,500 positions.   © AFP/Jiji
MICHELLE CHAN and KENJI KAWASE, Nikkei staff writersOctober 27, 2020 13:20 JST | Hong Kong
CopyCopied

HONG KONG -- Benson Wong Wai-kwok took his first-ever flight on Dragonair -- the predecessor to Cathay Dragon -- 27 years ago, forgoing the train and flying from Beijing back to his native Hong Kong after completing a summer course in China' capital.

Dragonair's iconic red dragon logo carried a deeper meaning for Wong, who was a university student at the time. He traces his first memory of the airline to 1989, when Dragonair sent a chartered flight to Beijing to retrieve stranded Hong Kong journalists who had been covering the Tiananmen Square crackdown.

"For this reason, I've always seen Dragonair as a symbol of Hong Kong," said Wong, a politics professor teaching at several universities in the city. "I just feel like it possesses more Hong Kong-ness than Cathay Pacific," he said of Cathay Dragon's parent, which shut down its regional carrier last week amid the group's struggles brought on by the coronavirus pandemic.

Wong views Cathay's difficulties as a parallel to the greater challenges facing Hong Kong society. Even before the pandemic, the city's flagship airline had been reeling from last year's social unrest, which triggered calls for a boycott among mainland Chinese passengers angry over the involvement of some Cathay employees in the protests.

"It is just like one country, two systems," Wong said, referring to the policy framework governing the former British colony since its handover to China. "When Chinese capital enters a free market, clashes are inevitable. So it is important that we preserve Hong Kong's own identity and local culture despite all the hardship." Cathay Pacific Airways said on Oct. 21 that it would discontinue Cathay Dragon as a separate unit with immediate effect as part of a restructuring plan that involves the elimination of 8,500 positions, or 24% of the company's workforce.

Chairman Patrick Healy said then the decision was final. "It is safe to say that we won't, sadly, be seeing the return of the Cathay Dragon brand."

Since then, employees and customers of the regional airline, which began as Dragonair in 1985 and was renamed Cathay Dragon four years ago, have been posting collections of boarding passes, miniature aircraft figure and travel photos on social media, creating their own obituaries for the Hong Kong-bred airline.

"Thanks for being an important part of my life and memory," one woman wrote, alongside photos taken with her husband on their honeymoon. "You will always be missed."

Jo Wong, who chairs a union for Dragonair staff, said last week that she was "extremely disappointed" with the decision to end Cathay Dragon's operations.

"The 35 years of history and a valuable brand which represents Hong Kong had been put to an end in one single day... [The company] did not leave us a chance to say goodbye to [our colleagues]," she said. "This pain will last forever and no compensation can ease."

The airline's 35-year history was indeed in line with the history that marked the return of Hong Kong sovereignty from the U.K. to China in 1997. 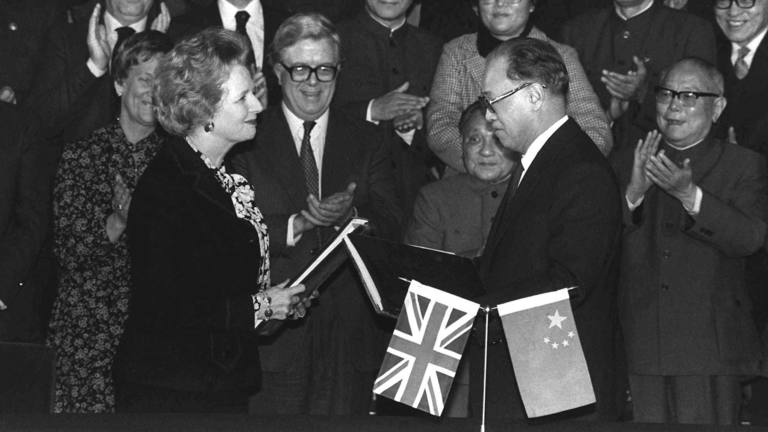 Following the signing of the joint declaration on the handover between the two countries in December 1984, the concept of creating a new airline controlled by China and supported by local pro-Chinese businesspeople emerged at a time the local market was monopolized by Cathay Pacific.

Textile magnate Chao Kuang-piu, who will turn 100 years old next month, led the airline's establishment in May 1985, winning financial backing from shipping tycoon Y.K. Pao, who had strong personal ties with top officials in Beijing, including paramount leader Deng Xiaoping. Other big names in Hong Kong business circles, such as Li Ka-shing and Henry Fok, joined in.

According to Pao's daughter, Anna Pao Sohmen, people around her father were against the idea of backing the venture for various reasons, including Pao's friendly relationship with Swire Group, Cathay's controlling shareholder.

Her father, who at one time had a seat on Swire's board, however, proceeded to take a 39% stake in Dragonair and became the new airline's chairman.

"It puzzled all his friends and relatives to see father make a decision that completely went against his usual business sense," Sohmen wrote in a 2013 biography of Pao.

A patriotic inclination to heed Beijing's call for a Hong Kong airline run by Chinese was the most likely reason, but "no one ever learned the answer," Sohmen wrote of her father, who died in 1991. The proposal to start a new Hong Kong airline to rival Cathay originated from China's leadership, according to Xu Jiatun, one-time head of the Xinhua News Agency in Hong Kong.   © Reuters

The proposal to start a new airline in Hong Kong to take on Cathay originated from China's leadership.

Xu Jiatun, then the head of the state-run Xinhua News Agency in Hong Kong, Beijing's de facto representative office until the handover, wrote in the 1990s that the idea for Dragonair came from Zhao Ziyang, a notable reformist official.

Zhao was the Chinese government's signatory for the handover treaty. The new airline was intended to "pull in managerial experience externally, and to provoke and improve civil aviation management in China," Xu said.

While Dragonair began as a rival to Cathay, it came under the larger airline's wing in 1990. In a series of transactions set off by an announcement by Pao in November 1989 that he would retire and dispose of his Dragonair shares, Cathay and Swire jointly took over a 35% stake and CITIC Group, a state-owned Chinese investment holding company, also became a major shareholder.

The arrival of Cathay and Swire in Dragonair's boardroom surprised Xu, who wrote that the purchase was agreed to by Yang Shangkun, then China's president, and approved by Premier Li Peng after Zhao's ouster following the Tiananmen crackdown.

Pao was disillusioned. "The airline business is too dependent on politics," the tycoon said, according to his daughter.

Six years later, Cathay sold some of its Dragonair shares to Air China Group, purportedly to ensure a smooth transition through the Hong Kong handover. In 2006, Dragonair finally came under Cathay's full control as it paid 8.22 billion Hong Kong dollars ($1.06 billion) to buy out other shareholders and make the erstwhile rival a 100% subsidiary. The deal came as part of a larger restructuring of the relationship between Cathay and Air China.

Aviation experts acknowledge the business logic behind ending Cathay Dragon, which was positioned between the full-fare premium service of Cathay Pacific and its low-cost affiliate Hong Kong Express, given the current economic environment.

"One of the better descriptions of Dragon was meat in a sandwich -- caught in the middle," said Andrew Cowen, an industry veteran who runs airline consultancy Genki Partners in Hong Kong, but laments the reality of so many people being laid off.

Fu Xiaowen, a professor at Hong Kong Polytechnic University who specializes in transport economics, said Cathay's decision was "unavoidable," but said it was "sad and disappointing" when considering the legacy and the jobs lost.

For Hong Kong fashion designer William Tang, Cathay Dragon -- and Dragonair before that -- was the airline of choice for business trips to mainland China. He traveled on the airline as many as three times a week.

"I used to tell everyone that I don't travel to cities where Dragonair doesn't operate a direct flight," Tang said.

In 2000, Tang designed new uniforms for Dragonair's flight attendants. They lasted more than a decade until Cathay rebranded the regional airline.

"The disappearance of such an outstanding homegrown airline is very saddening," he said. "It's the end of an era."