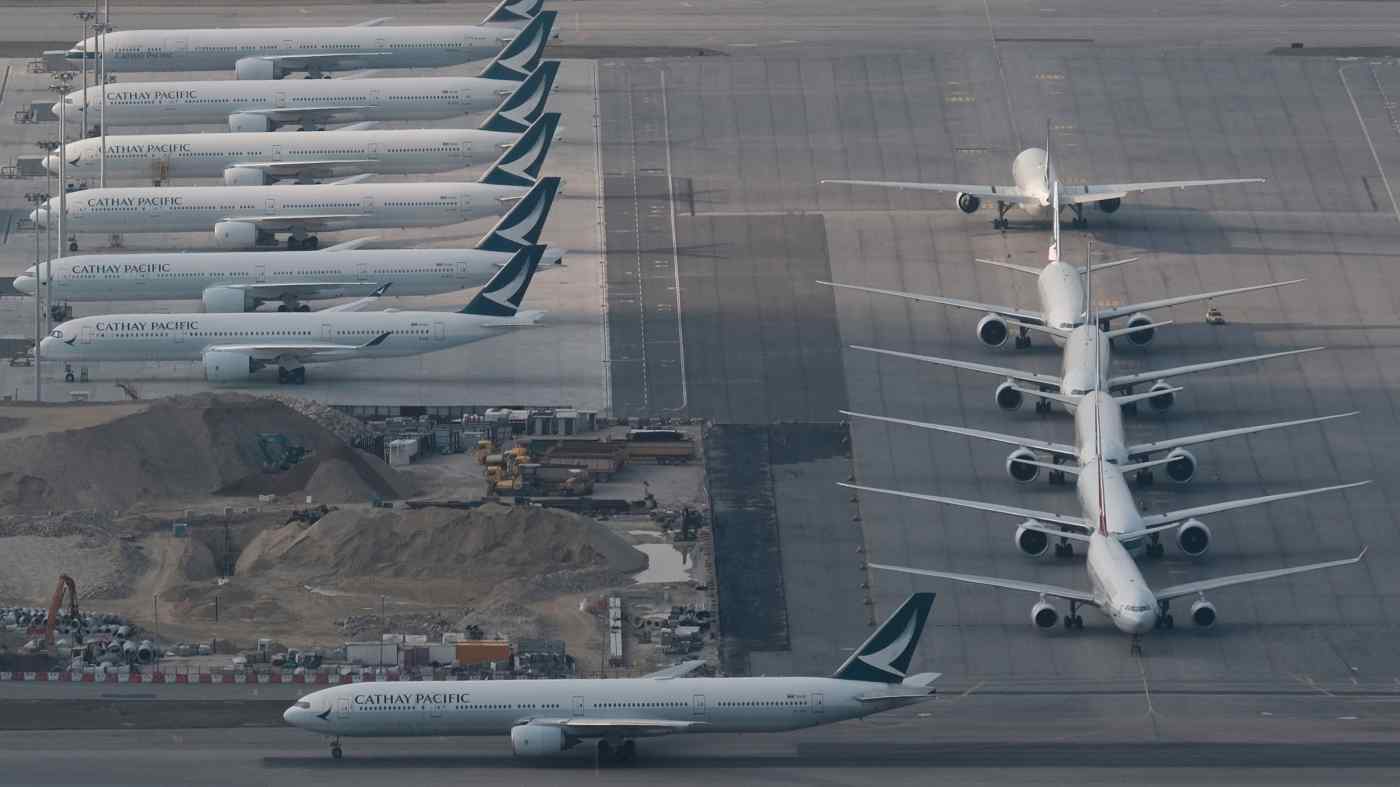 HONG KONG -- Cathay Pacific Airways said on Wednesday that it lost a record $2.8 billion last year because of the coronavirus pandemic, with Hong Kong's flagship carrier especially hard hit because it does not have domestic routes to fall back on, unlike most global peers.

Patrick Healy, chairman of Cathay, said in a statement that 2020 was "the most challenging 12 months of its more than 70-year history."

In an online news conference later in the day, Healy stressed that "the pace of recovery remains highly uncertain and the group is still very much in survival mode." In January of this year, Cathay carried an average of 981 passengers a day, down 99% from the same month a year earlier.   © Reuters

Last October, Cathay cut 8,500 jobs -- 24% of its total head count at the time -- to cope with the grounding of most of its passenger flights amid the pandemic. Hong Kong-based employees accounted for well over half of those job losses, or 5,300.

In a client note immediately after the results were released, Jefferies analyst Andrew Lee said he expects Cathay "to remain loss-making until travel/quarantine restrictions ease and international travel returns" adding that he believes the group "is close to the bottom" of its business trough and rates its shares as "buy."

The substantial drop in revenue and the record loss was attributed mainly to the sharp falloff in passenger traffic. Cathay's passenger revenue, which accounted for about 70% of its total receipts in 2019, dropped 84% to HK$11.950 billion in 2020.

Cathay's revenue and net loss both were roughly in line with the consensus of 11 analysts compiled by QUICK-FactSet. They expected an average net loss of HK$20.88 billion and HK$45.123 billion in revenue.

Impairment and related charges of HK$4.06 billion for the year also were a big burden. They came mainly from discharging 34 aircraft deemed not to be making meaningful financial contributions. The airline said 92 of its aircraft, or 44% of its passenger fleet, are parked overseas in Australia and Spain.

Restructuring costs of HK$3.97 billion, including a HK$1.59 billion write-off of a deferred tax asset for Cathay Dragon, its regional carrier that ceased operations last fall, also weighed on the airline's bottom line.

In reference to the flying rights for 46 routes formerly served by Cathay Dragon and which reverted back to various authorities, Cathay was confident of taking them back.

Ronald Lam, chief customer and commercial officer, said the airline already has regained five routes, and "in the second quarter, we will continue to resume more destinations."

Most of those routes will be cargo-only for the time being, but the airline is seeking to turn them into passenger services when demand returns.

Augustus Tang, Cathay's CEO, said that he is "totally confident that our plan will be completely realized" in terms of gaining approval to fly on former Cathay Dragon routes.

The airline was not able to avoid substantial losses, despite receiving HK$2.69 billion in pandemic-related grants from governments globally and a HK$39 billion recapitalization led by the Hong Kong government last June.

One of the major silver linings for Cathay came from its cargo service. Group revenue for this segment increased 17% on a year-on-year basis to HK$27.89 billion, reflecting the imbalance of supply and demand caused by the pandemic.

The deep cut in passenger flights resulted in a substantial loss of air cargo capacity across the industry, causing freight costs to rise, but the segment still accounted for 60% of group revenue last year.

Total fuel costs dropped 62% last year compared with a year earlier to HK$11.38 billion, as oil prices tumbled. However, Cathay's hedging losses increased to HK$3.02 billion, about 30 times higher than in 2019, undercutting the group's gains from the decline in its fuel consumption and of oil prices.

Cathay said that in February it had completed the issue of a convertible bond, raising HK$6.74 billion in new funds. Healy said the company is looking for additional "commercial opportunities for raising further liquidity over the coming weeks and months."

Luya You, transport analyst at BOCOM International, told Nikkei Asia that she expects results for the first half of 2021 to be even worse than a year earlier "as passenger demand has not recovered while cargo capacity is limited" by the new aircrew quarantine rules, raising the risk of further staff cuts.

She added that the airline appears more cautious about prospects for a second-half recovery, as COVID-19 vaccination progress "now appears to be slower and less predictable than expected."

In terms of the airline's outlook, Healy said that "assumptions that we made are largely valid" at this point, referring to overall capacity of 25% in the first half of this year, and recovering to roughly 50% for the full year, assuming successful vaccination programs.

In January of this year, the airline carried an average of 981 passengers a day, down 99% from the same month a year earlier, when the impact of the pandemic on the airline was not yet apparent.

Cathay's shares fell 0.6% on the Hong Kong Stock Exchange on Wednesday to close at HK$7.06.