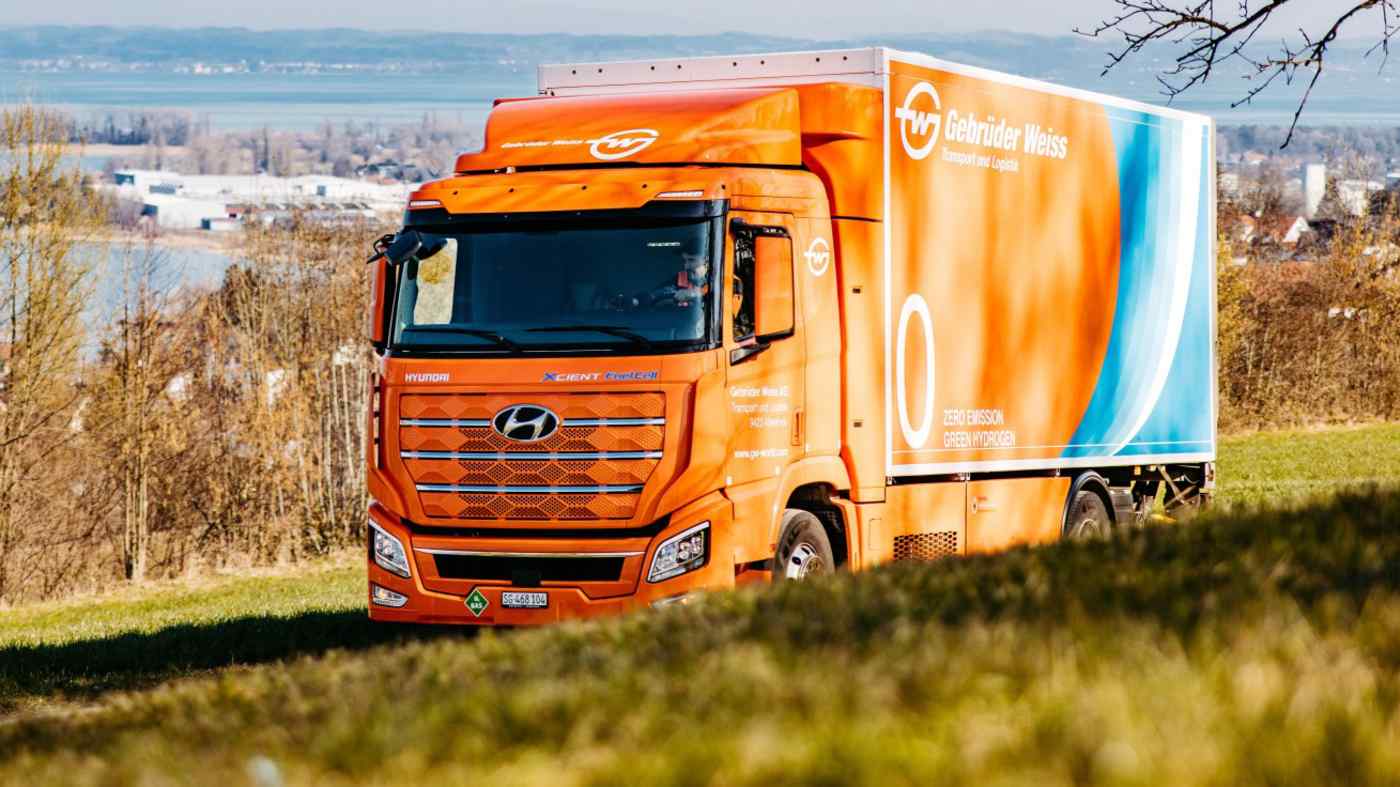 A large zero on the side, together with smaller text reading "zero emission green hydrogen" marks it as the world's first mass-produced fuel cell heavy-duty truck model -- basically an electric vehicle that gets its juice from a hydrogen cell instead of a battery.

Gebrueder Weiss has been operating its Xcient since January 2021 in Switzerland, the country Hyundai chose as its launchpad into Europe. In the coming months, Hyundai will expand into neighboring Germany and Austria, along with Denmark, where partners H2 Energy, based in Zurich, Singapore's Trafigura and Phillips 66 of the U.S. are investing 300 million euros ($331 million) to create a corridor of 260 hydrogen fueling stations. H2 Energy played a key role in the development of the Xcient.

Meanwhile, the fuel cell trucks of rivals, such as Daimler and MAN, are still in the prototype stage. Hyundai, by contrast, already has 47 Xcients carrying loads for 25 customers in Switzerland.

"In its first year of service, our hydrogen truck made 70,000 km without any issues, despite Switzerland's mountainous terrain constituting a real challenge for the reliability of trucks," Juergen Bauer, a member of Gebrueder Weiss' board, told Nikkei Asia.

"Unlike battery-powered electric trucks, our Hyundai's range is virtually unaffected by the driver's use of heating or air conditioning. And once a sufficiently large network of hydrogen refueling stations is realized along European highways, the hydrogen truck will be able to run practically unlimited distances, thanks to short refueling times," Bauer said.

The Xcient's record of reliability and efficiency adds to its environmental selling point, as hydrogen, if produced with renewable electricity, is carbon neutral and does not create toxic exhaust fumes. Also, the Xcient can be fueled for about 70 euros per 100 km, versus about 80 euros per 100 km for a diesel truck. The Ukraine war has pushed prices for both hydrogen and diesel sharply higher.

Fuel cell-powered trucks' main advantage over their battery-powered counterparts is that refueling takes around 12 minutes for around 430 km of range, compared with several hours to recharge a battery sufficiently to go the same distance, depending on the respective battery charging infrastructure. Perhaps the strongest selling point, however, is the favorable public policy outlook: A number of big European cities, including Amsterdam and Rotterdam, are planning to ban the entry of diesel vehicles in the coming years.

Gebrueder Weiss also plans to use additional hydrogen fuel cell trucks to serve southern Germany and Austria. According to Bauer, it is important to have a dense service network. A Hyundai service partner is usually only a few kilometers away in Switzerland, which helps keep trucks on the road.

"Each day a truck is not in use because of maintenance work, the revenue is down, and if the next service workshop is 50 km away, you typically lose a full day," Bauer said. Hyundai, as part of its FCEV Vision 2030, says it plans to manufacture 700,000 fuel cell systems annually by that year, including 500,000 for fuel cell vehicles.

Hyundai's choice of Switzerland as its steppingstone into Europe is largely explained by the exemption that zero-emission trucks receive from country's steep road tax on commercial vehicles. Hyundai distributes the trucks in Switzerland under a pay-per-use leasing scheme to ease the burden on customers of Xcient's hefty price tag of around 500,000 euros, which is about three times higher than that of a diesel truck made by the likes of Daimler, Scania and Iveco.

Ahead of the entry into Germany, Austria and Denmark this year, governments in the three countries are completing guidelines for subsidy programs.

"Fuel cell trucks are much more an enabler for the hydrogen filling station networks than cars, given that filling up trucks lets the station owner earn revenue quicker than filling up cars," said Beat Hirschi, CEO of Hyundai Hydrogen Mobility. "With mass production picking up for our fuel cell trucks, and favorable taxation policies, the price gap between fuel cell trucks and diesel trucks will gradually narrow, to come close to parity in the next decade."

But there are bottlenecks to Hyundai's plan to enlarge Xcient's European footprint. While the trucks are made in Hyundai's Jeonju Plant in South Korea, the trailers that carry their cargo are typically made locally. These suppliers are struggling with shortages of aluminum, steel and cable looms, as well as lengthy certification processes.

The latter issue is linked to fact that the truck's hydrogen tanks must be attached to trailer. The bottlenecks explain why Hyundai has pushed back its initial goal of rolling out 1,600 Xcients by 2025 to 2027. "The supply chain will be back to normal in the next six to 12 months, but the general economic situation, including the Ukraine war, makes customers hesitant to procure," Hirschi said.

"The longer the route, and the heavier the load, the better it goes with a fuel cell, and Hyundai has the right instinct," Dudenhoeffer said.