The government sees the logistics industry growing to $215 billion a year around 2021 -- up more than 30% from 2017 and reaching the equivalent of the Japanese market. The state-owned Container Corp. of India, or Concor, is in the thick of it, as it looks to launch a commercial refrigerated rail service for the domestic market by October.

Concor Chairman and Managing Director V. Kalyana Rama told Nikkei Asian Review in an interview that such services have mainly been used for export-bound goods until now. The company seeks to tap demand from consumers desiring quality foods, he said, and is eyeing nationwide expansion by 2021.

Driving the strategy is the evolution of consumer preferences, which has increased the need for low-temperature transportation. Shoppers who used to buy food at small retailers and stalls near their homes are increasingly heading to modern supermarkets that offer a wider variety of goods.

According to Euromonitor International, India's retail sales totaled about $630 billion in 2018, 57% of which came from small and medium-sized grocery vendors, which have limited refrigeration and freezing equipment. 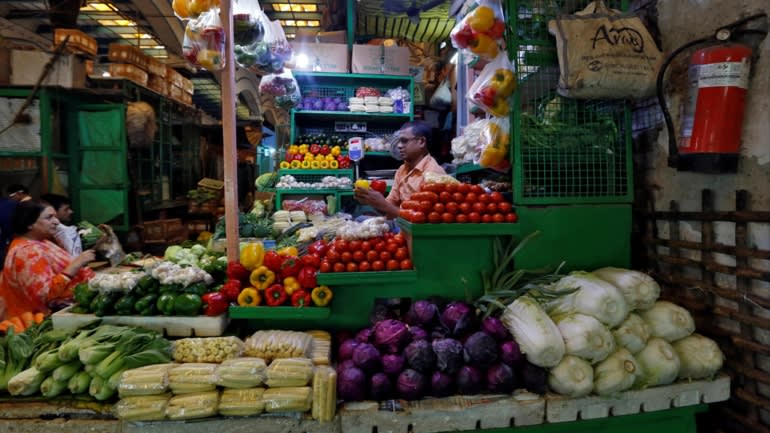 Indian consumers are gradually moving away from neighborhood vendors like this one in Kolkata, which have limited refrigeration and freezing equipment.   © Reuters

But in large cities such as Mumbai and New Delhi modern retailers are growing, and the proportion of the smaller players nationwide is expected to drop to 48% by 2023, as modern retailers with cold storage open up more outlets.

Busy middle-class urbanites are choosing modern retail stores that offer more variety and transparent pricing, even if they are more expensive than traditional vendors. Competition between modern players means that "nowadays, you can find cheap vegetables even in a big supermarket," said a housekeeper in her 20s living in a New Delhi suburb.

Major Indian retailer Future Group, through a franchise agreement with Japan-based Seven & i Holdings' U.S. subsidiary, is planning a rapid launch of the country's first 7-Eleven convenience stores, aiming to tap the growing market with 500 or more store openings over the next five years.

Not to be outdone, Godfrey Philips India, a convenience store pioneer in India, aims to expand its 24Seven chain to 500 locations in the next two to three years from about 50 at present. The rise of convenience stores follows a spate of local conglomerates such as Reliance Industries and Tata Group that opened large-scale supermarkets in the last 15 years or so.

Behind the scenes, cold-chain infrastructure is crucial, as it enables perishables like fresh vegetables and fruits to be transported to large cities far away from agricultural areas. A more extensive cold chain could have a potent knock-on effect, boosting the incomes of the farmers who account for 50% of India's vast population of 1.3 billion and spurring the overall economy.

Concor ran trials through June and cleared up technical issues. Cherries were transported from a northern city to Mumbai, first by truck and then by rail, traveling a total of about 1,900 km. Outside, temperatures in some places along the route can approach 50 C, but Concor kept the container at a chilly 5 C to 7 C.

The company had help from Tokyo-based ITE, which developed a flat cooling unit dubbed the IceBattery. ITE has supplied the system, capable of keeping temperature at a preset level between 2 C and 8 C for 120 hours, to more than 100 companies in Japan, including airline ANA Holdings and leading retailer Aeon. No electricity or gasoline is required in transit -- a feature that attracted Concor, since access to power remains unreliable in some parts of India. Shoppers are heading to modern supermarkets that carry a wider variety of goods. (Photo by Yuji Kuronuma)

Cold-chain operations also require other elements of infrastructure, including warehouses for storing products. Concor has a network of 83 dry ports, and Rama said "we are planning to increase them to 100, and we'll be adding 20 more distribution logistics centers. So, in the next three to four years, it [will be] a network of 120 centers. This country needs this vast network" to maintain an effective cold chain.

Concor is part of a broader flurry of activity. Another company called Snowman, which counts Japanese trading house Mitsubishi Corp. as a shareholder, boasts 31 warehouses in major cities and a fleet of about 290 trucks. Local cold-chain expert ColdStar Logistics is also beefing up operations.

The modernization of Indian retail extends to online shopping, which is poised to surge with state-of-the-art fulfillment centers. Amazon.com has just opened a new office building in the southern city of Hyderabad, its largest campus in the world. IndoSpace, a leading industrial real estate company, opened large logistics parks in two northern states and one in the west earlier this year. It is drawing on know-how from Singapore's GLP, Asia's leading warehouse operator.

Supply chain startup Delhivery, which does business chiefly with online retailers, is working to automate its shipping center that brings goods to more than 2,000 cities. The company was founded in 2011 and secured $413 million in a financing round led by the SoftBank Vision Fund in March -- yet another signal that India's retail and logistics competition is heating up.