NEW DELHI -- At a time when the global aviation industry has been drastically hit by the COVID-19 pandemic, India's airlines appear to be turning the crisis into an opportunity by expanding their international operations under the ongoing "travel bubble" arrangements.

The latest company to join the bandwagon is low-budget carrier SpiceJet, which earlier this month announced that on Dec. 4 it will launch non-stop services connecting Delhi and Mumbai with London's Heathrow Airport.

"For SpiceJet, this is a big step [as] it's the first time we are starting scheduled long-haul operations," said Chairman and Managing Director Ajay Singh during an online briefing to announce the London flights. The airline has until now been flying to international destinations closer to India such as Bangkok and Hong Kong.

"More importantly, we are the second-largest airline in India and connect destinations in small towns [in the country]," he said, pointing out that many people from these places want to travel to London, while passengers arriving from the British capital will also be able to travel to other Indian cities on SpiceJet's domestic network.

SpiceJet's flights will operate under an "air bubble" agreement between India and the U.K. This is a temporary bilateral arrangement aimed at restarting commercial passenger services when regular international flights are suspended due to the pandemic. India has entered into such pacts with more than a dozen countries including the U.S., Canada, France and Germany. India has entered into 'travel bubble' pacts with over a dozen countries, including the U.S., Canada, the U.K., France and Germany, allowing international flights to resume.   © Reuters

With the London flights, SpiceJet has become the first Indian low-cost carrier and only the third airline in the country to fly to the U.K. -- the other two being state-run Air India and Vistara, a joint venture between India's Tata Group and Singapore Airlines. The gap left by Jet Airways, which was grounded last year, is also expected to work in SpiceJet's favor.

Large numbers of people from India travel to the U.K. for holidays, business, education, and visiting family and friends, given that the country is home to 1.5 million Indians. According to Sally Balcombe, chief executive of Visit Britain, India represents its 16th biggest market in terms of visitors, with nearly 700,000 travelers coming to the U.K. annually.

In August, Vistara, a full-service airline, started flying non-stop on the Delhi-London route -- where it deployed its new wide-body Boeing 787-9 Dreamliner aircraft -- as part of the transport bubble, marking its foray into long-haul international operations.

Vistara, which received its second Dreamliner aircraft the same month with the aim of further strengthening its fleet to operate more such long-haul flights, said it was also seeking regulatory approval to offer similar special flights to Paris and Frankfurt.

"The arrival of our second Boeing 787-9 Dreamliner ... underlines our commitment to expanding globally," Vistara chief executive Leslie Thng said at the time. "There is an inherent need for an Indian carrier with a modern fleet, world-class cabin products and onboard service to fly non-stop on long-haul routes. Our Dreamliner aircraft help us distinguish our offering and give us a competitive edge in the market."

Sindhu Bhattacharya, a New Delhi-based aviation columnist, shared some possible reasons behind SpiceJet choosing this moment, during a pandemic, to launch long-haul flights to London.

"This is an operators' market, with aircraft lease rentals down by about a third. This cuts costs of such flights," she told Nikkei Asia, adding that the airline could also be leaving the competition behind by announcing a launch now, since other Indian low-cost carriers could also be eyeing the lucrative London route. 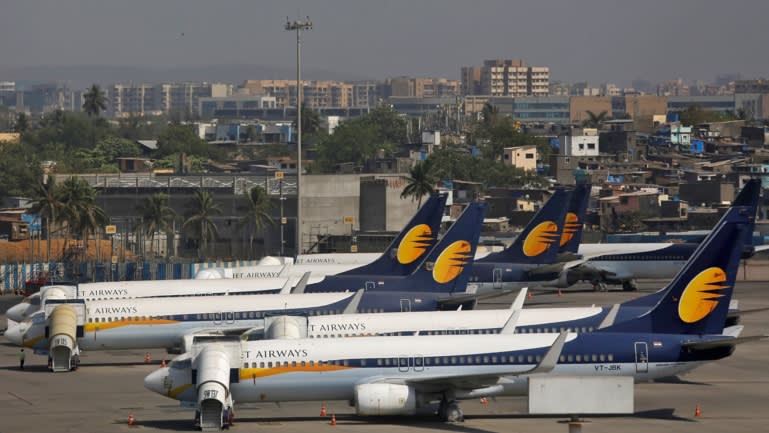 The collapse of Jet Airways, once India's largest private airline, created opportunities for other airlines to start up international flight services.   © Reuters

India's huge efforts to repatriate its citizens, as well as nationals of other countries, stuck in various places around the world due to the suspension of regular flights during the pandemic also helped SpiceJet gain experience in long-haul routes. On Aug. 20, it operated its maiden long-haul wide-body charter flight from Heathrow to repatriate 329 people.

It has so far operated 800 flights to help repatriate close to 130,000 stranded Indian citizens and foreign nationals, including on other long-haul routes such as Amsterdam, Toronto and Rome.

"A time like [this pandemic] is a huge challenge, but it's also a huge opportunity," Singh said. "We always had this dream of having our own international hubs in India and carrying our own passengers long-haul into Europe, into the U.K. and into the United States. This is the first step toward that great objective."

However, it is interesting to note that another budget carrier, IndiGo, the country's largest airline by passenger numbers, has not yet announced any long-haul flights involving wide-body aircraft. "We continuously look at this whole wide-body equation," IndiGo chief executive Ronojoy Dutta said during a July 29 conference call with analysts. "The trouble is, wide-body has always been a sort of touch-and-go issue for us."

"The numbers are sort of okay, but we know there is a risk to it, so we keep saying, 'Okay, let's wait and see, wait and see'," he added. He did also acknowledge that getting into wide-body flights could work in the airline's favor, given that the costs of such aircraft and fuel are currently down, and noted that one-stop flights were becoming less competitive than non-stop ones. 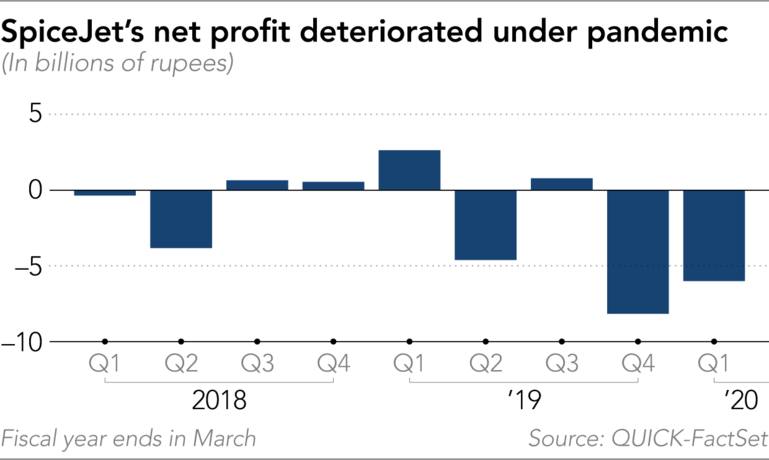 Meanwhile, SpiceJet's Singh said during the online briefing that it would be difficult to say whether the worst was now behind the aviation sector. "We can just carry on with the job that we have at hand and hope that this is over soon. In our view, this is at least one year away. But life will not come to a standstill for this period of one year."

On Sept. 16, Indian Civil Aviation Minister Hardeep Singh Puri informed parliament that airlines in the country were seeking an interest-free line of credit of at least $1.5 billion from the government to cope with the revenue losses caused by the coronavirus-linked lockdowns and restrictions.

India is the world's second-worst hit country by the pandemic after the U.S, and as of Oct. 14 had reported 7.24 million cases and over 110,500 deaths.

Globally, the International Air Transport Association estimates that the airline industry will burn through $77 billion in cash during the second half of 2020, despite the restart of operations. "The slow recovery in air travel will see the airline industry continuing to burn through cash at an average rate of $5 [billion] to $6 billion per month in 2021," it said in an Oct. 6 statement.