TOKYO -- Japan Airlines will take out a new credit line worth 100 billion yen ($958 million) in November, as the flag carrier seeks to strengthen its business portfolio in the face of financial turmoil from the novel coronavirus that could last for years.

JAL, which expects a net loss of 240 billion to 270 billion yen for this fiscal year through March 2021, and its first net loss since its relisting in 2012, will take a number of cost-cutting steps, including reducing the size of its fleet and cutting executive pay, to rationalize its business for a period of much lower flight demand.

"We have been able to stay on healthy financial ground for the moment," Hideki Kikuyama, a senior managing executive officer in charge of JAL's finances and accounting, told reporters on Friday. "We will have an unused commitment line amounting to 300 billion yen," he added.

Kikuyama said JAL's cash burn fell significantly in the July to September quarter, compared with the previous three months, when the airline had to deal with a wave of refund requests for bookings made before the COVID-19 pandemic. 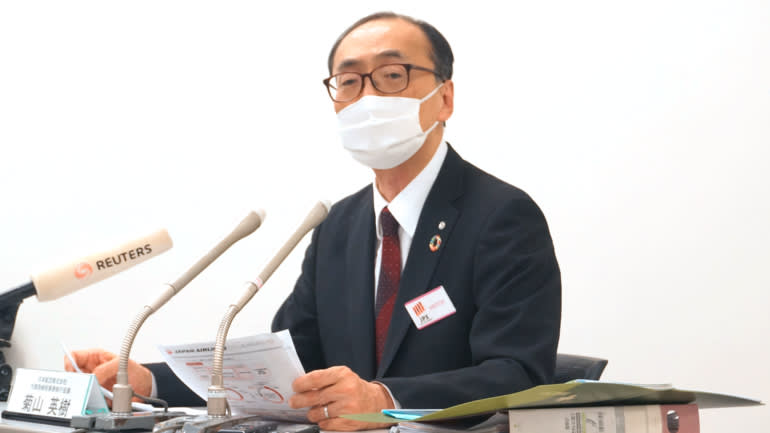 Hideki Kikuyama, a senior managing executive officer in charge of JAL’s finance and accounting, speaks at a news conference in Tokyo on Oct. 30. (Photo by Eri Sugiura)

But the additional credit line highlights the company's cautious outlook. JAL forecasts only 25% to 45% of its international passenger volume in fiscal 2019 to return in March.

Domestic flights, which are seeing light at the end of the tunnel, helped by government travel subsidies, will reach 72% to 87% of last year's levels, Kikuyama said, while cautioning that the situation remains unclear.

JAL plans to cut costs by retiring all 11 Boeing 777-200ER jets flying international routes by the end of this fiscal year. It will also remove 13 older 777 aircraft from domestic service by the end of fiscal 2022.

Executive pay will be reduced by 55% in fiscal 2021, compared with pre-COVID levels, as the airline announced Friday that it will stop offering performance-linked compensation. Around 500 employees who "responded to proposals" will be temporarily seconded to outside companies. So far, the airline has not cut payrolls or furloughed employees.

"It is difficult to expect a recovery of demand for business [travel] to pre-COVID [levels], but demand for tourism and VFR [visiting friends and relatives] might exceed pre-pandemic levels" in the coming years, Kikuyama said.

To adjust to the harsher environment, JAL aims to shrink its full-service carrier business -- which accounted for nearly 70% of the total last fiscal year -- to 60% in the near future. The group's budget carriers, which cater more to tourists and leisure travelers, will play a larger role in its business portfolio.

JAL plans to announce its new midterm plan by next March.

JAL rival ANA Holdings, which on Tuesday forecast its worst-ever net loss of 510 billion yen for this fiscal year, is also preparing for a long slog. The airline signed an agreement for 400 billion yen in subordinated loans, which are considered similar to equity. It will reduce its fleet by 35 aircraft this fiscal year, 28 more than originally planned.

Creating new revenue streams has become imperative for the airlines, which for the moment have little international business. JAL President Yuji Akasaka has previously said the company will send some 1,000 cabin crew members to participate in regional revitalization projects in Japan, even as they continue to fly.

ANA said its restructuring plan will strengthen its mileage service, creating a "super app"-like platform to increase contact with customers.