TOKYO -- Japanese transport authorities have told domestic airlines not to fly 32 passenger jets that use the same family of engine that burst into flames over the weekend on a Boeing 777's U.S. flight, strewing debris along its path.

Sunday's move by the Ministry of Land, Infrastructure, Transport and Tourism affects 13 planes operated by Japan Airlines and 19 operated by All Nippon Airways, part of ANA Holdings. None of these planes are scheduled to fly Monday.

The decision comes after a United Airlines flight from Denver to Honolulu was forced to make an emergency landing Saturday local time over what the carrier called "an engine failure shortly after departure."

The incident yielded dramatic images of the flaming Pratt & Whitney engine and fallen debris, but no injuries were reported aboard the plane or on the ground.

"Big thanks to the pilot and crew for safely landing the aircraft," Denver International Airport said in a tweet. The U.S. National Transportation Safety Board said it had begun an investigation. 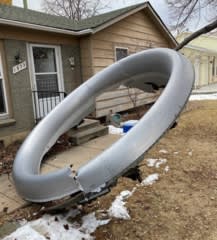 This photo from social media shows plane debris from a United Airlines flight in Broomfield, Colorado, on Feb. 20. (Broomfield Police via Reuters)

JAL and ANA had grounded the 32 planes on their own Sunday before the ministry's instructions. A JAL flight to Haneda from Naha in Okinawa was canceled as a result.

The stoppage will allow time to consider additional measures in response to the United engine failure, according to the ministry.

The ministry said an engine in the same PW4000 family suffered trouble on a JAL 777 en route to Haneda from Naha on Dec. 4. It ordered stricter inspections in response.

The earlier failure came minutes after takeoff. The plane made an emergency landing with damage to the cowl, or engine cover, and elsewhere. No one was injured. Japanese transportation safety inspectors examine an engine after it failed on a Japan Airlines flight from Naha to Tokyo in December 2020.   © Kyodo