Bitter memories of a tunneling misadventure a century ago resurface TOKYO -- The Linear Chuo Shinkansen project of Central Japan Railway, the train operator better known as JR Tokai, has run into vehement objections from local authorities along the planned line.

Shizuoka Prefecture has refused to approve the start of tunnel work in Japan's Southern Alps on the grounds that it would be detrimental to local water resources.

The Linear Chuo Shinkansen is a national project that will connect Shinagawa in Tokyo to Nagoya in central Japan in just 40 minutes using a magnetically levitated bullet train along a 286 km route.

But dark clouds have gathered over the massive project.

Takashi Namba, the vice governor of Shizuoka Prefecture was less optimistic, and expressed doubts over a recent draft interim report, which he said would not "gain local understanding if it is written this way."

Uno and Namba expressed their conflicting views at different press conferences in mid-April after a government panel of experts met to review the project and draft a report. The contradictions highlighted the deep divisions between the two sides.

The expert panel was established in April 2020 to investigate the impact of the tunnel construction in the Shizuoka section on the Oi River, among other things. Japan's Southern Alps are the source of the river.

The panel presented its draft interim report in April, which assessed low risks. It said the project would have only a very small impact on the amount of underground water in the middle and downstream basins of the river. 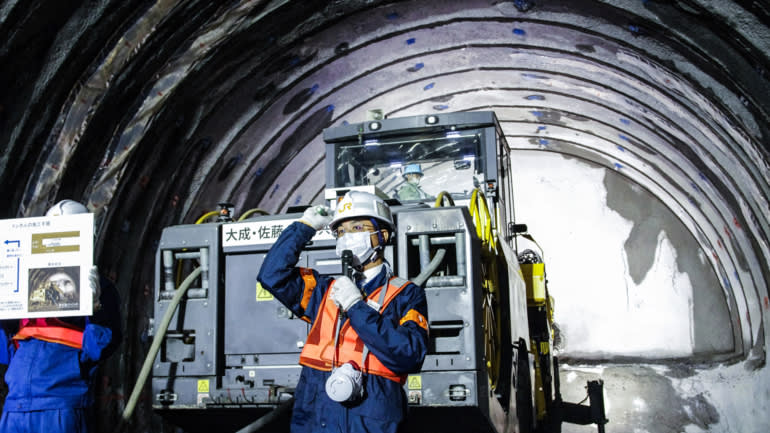 JR Tokai explained the Linear Chuo Shinkansen project to the media at the construction site in Yamanashi Prefecture, May 12, 2021.   © Kyodo

Shizuoka's government expressed dissatisfaction with the document, claiming the verification work was "insufficient and hasty."

About two and a half years ago, JR Tokai said it would return all water gushing out from the tunneling work to the Oi River, but this proposal was rejected by Gov. Heita Kawakatsu on environmental grounds.

After JR Tokai and the Shizuoka authorities refused to budge, the Ministry of Land, Infrastructure, Transport and Tourism intervened to try and place the issue on a more scientific footing.

Residents along the planned route are meanwhile concerned by what happened about a century ago with the Tanna Tunnel project on the Tokaido line between Atami and Kannami in Shizuoka.

When construction work was launched on what was considered a major engineering challenge, huge amounts of water poured into the basin and seeped away, leaving nothing for agricultural needs.

Local farmers were paid compensation by the national government, but water did not return to the basin. The incident has never been forgotten locally, and there are concerns it might be repeated.

"Everyone has become suspicious," said a senior ministry official.

The Linear Chuo Shinkansen project has also proved challenging in other ways. JR Tokai announced on April 27 that the total cost of the Shinagawa-Nagoya maglev train line would surge by as much as 1.5 trillion yen.

The cost of building terminals was higher than first estimated, and earthquake mitigation measures were also more costly. Although it would now be very difficult to open the line on schedule in 2027, the company has yet to announce a formal review of the project.

Kawakatsu said the Shizuoka government "is not opposed" to the project, but it remains unclear what conditions it wants met for a green light to be given. The expert panel's conclusions are not enough to make it locally acceptable.

The Japanese government plans to invest 3 trillion yen (about $27.5 billion) in the mega project. Given its national nature, the issue will not be left to the disputing parties alone.

Shizuoka has gubernatorial elections in June, and Kawakatsu has announced plans to run for a fourth term.

Shigeki Iwai from the ruling Liberal Democratic Party, who served as senior vice minister at the Ministry of Land, Infrastructure, Transport and Tourism, has also announced his candidacy -- ensuring the maglev debate will be a central campaign issue.

If the Linear Chuo Shinkansen line opens, its estimated economic benefit has been put at 16.8 trillion yen -- about $154 billion. A fresh start may now have to be made to balance economic interests with environmental concerns.