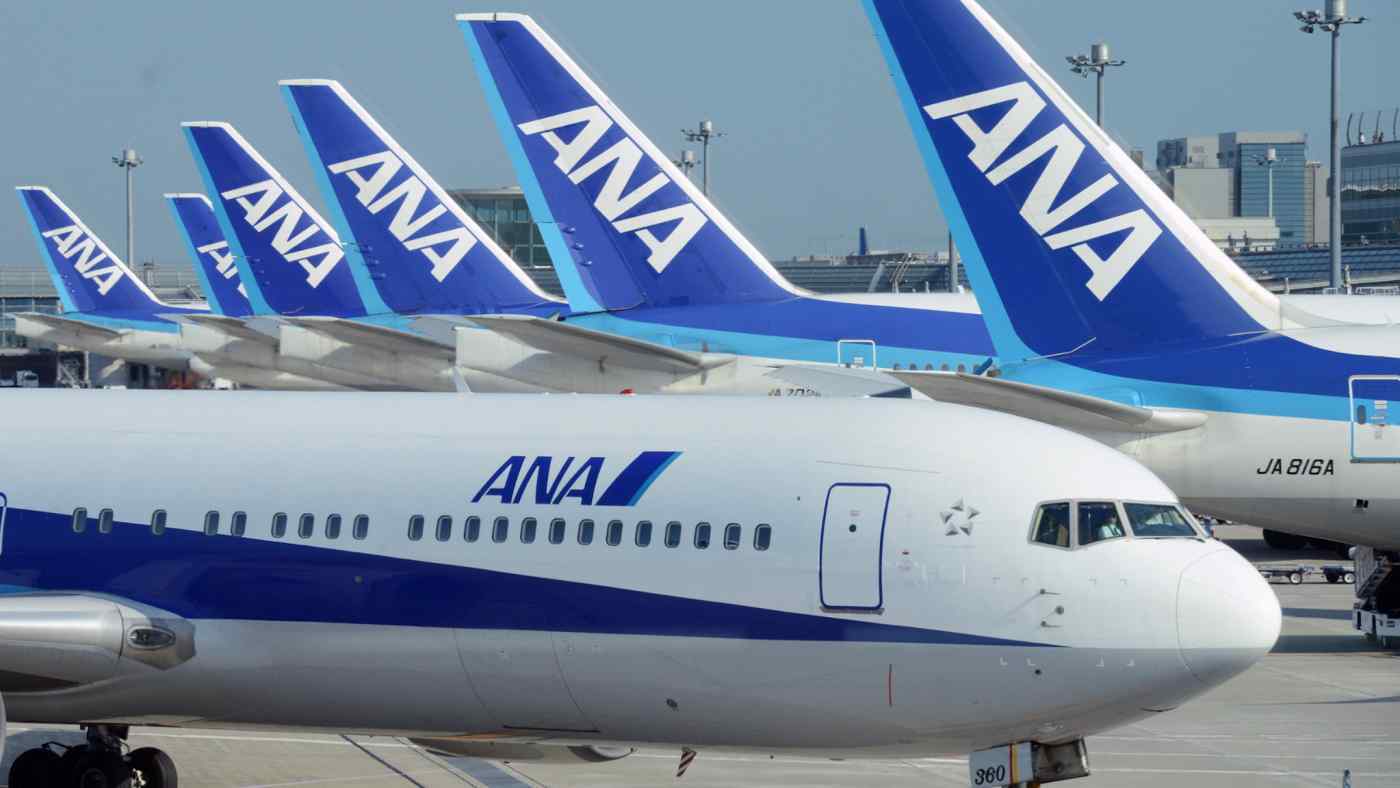 TOKYO -- All Nippon Airways has proposed to lay off staff as it tries to cut costs in the face of the global travel slump, Nikkei learned on Wednesday.

The Japanese airline is in discussion with its labor union over details of a severance package. Management also seeks to reduce monthly pay for around 15,000 employees. The cuts are expected to lower annual compensation by about 30%

The coronavirus pandemic has decimated airline earnings and despite securing a 1 trillion yen ($9.4 billion) credit line in June, ANA has been unable to turn its fortunes around as demand for travel remains weak.

Parent company ANA Holdings posted a net loss of 108.8 billion yen for the April-June quarter and slashed bonuses for its staff by half over the summer. It has said it will not offer any winter bonuses, long a tradition of the company which considers these payouts part of "living wages" for its employees.

But such cost-cutting efforts have not been enough to stem the outflow of cash. ANA has also been restructuring its business by selling off equipment, consolidating domestic routes that mainly use Haneda Airport in Tokyo and Itami Airport in Osaka and reducing office space.

The proposed monthly pay cuts would be the first in 20 years to affect rank-and-file employees. ANA will offer up to two years of unpaid leave for career improvement activities. It will also continue furloughs begun in the spring. ANA's early retirement program dates back to 1992.

ANA is not the only airline suffering. Japan Airlines said it was pressing the government to ease coronavirus travel restrictions, since testing capacity had been expanded at the country's airports, the president of the national flag carrier said Wednesday.

Nikkei learned Wednesday that Japan plans to permit Japanese and foreign national business travelers with residency status to reenter the country without having to isolate for two weeks, a move that will help the beleaguered travel industry.

This comes on the back of a deal to reopen borders to South Korean business travelers, without requiring quarantine on arrival if travelers test negative for coronavirus, from Thursday. Japan already has such an agreement with Singapore.

But airlines want the government to go further. JAL said easing restrictions for arrivals from countries with low infection rates and tweaking the two-week self-isolation requirement for such travelers would stimulate demand.

"We have requested the government to consider relaxing the travel advisory... It's important to lower the travel advisory level for countries that have low risks of infections," JAL President Yuji Akasaka told reporters at a regular briefing. “It's important to lower the travel advisory level for countries that have low risks of infections," says Yuji Akasaka, president of Japan Airlines. (Photo by Eri Sugiura)

As for the two-week quarantine, he said the airline was asking the government "if there could be a better alternative, or if the period could be reduced," acknowledging that a cautious approach to the relaxation of measures was needed.

Japan has expanded its testing capacity over the last few months. A total of around 10,000 people can be tested per day at Narita International, Haneda and Kansai International Airports, Japan's three largest. The government is planning to still double the testing capacities at these airports by practicing testing in other regional airports.

Despite such attempts, JAL said only around 1,350 people landed in Japan in September, a mere 4% rise from the previous month.

"Much of the expanded capacities are now being unused," Akasaka said. "We hope travel restrictions will be gradually eased and we also believe that international flights will rebound once current testing capabilities are fully operated."

The government advises against travel to 159 countries and regions. Japanese travelers returning from these places must quarantine for 14 days and will not be allowed on public transport upon arrival during that period.

Japan had also all but banned the entry of foreigners until Oct. 1, when those who planned to stay for more than three months for business or study were allowed in again.

Akasaka said, however, that international flight bookings for October have not increased, due to the quarantine rule. JAL particularly wants "a recovery of business travel on its North American routes, given Japan's economic ties with the U.S." Bringing its Hawaii routes back to life will be crucial for the airline's operation, too, he said.

Akasaka said that while the number of domestic flights have reached around 70% of the precrisis levels, mainly boosted by the government's "Go To Travel" campaign that offered domestic travel subsidies, the number of international flights are still down by 90% from before the pandemic hit.

Backed by stronger demand for internal travel, Akasaka said the company would enhance domestic ties and establish in November a division dedicated to promoting such businesses. Nearly 1,000 cabin crew will be offered jobs in these projects while continuing to serve onboard.

Akasaka said the company will develop domestic revitalization as a core of its non-air business, revenues of which will scale up over the next four or five years to 100 billion yen ($942 million), a similar level to its cargo business.

"Most of our newly developed businesses will be related to domestic projects," Akasaka said.