TOKYO -- Japan's planned maglev rail line that will link Tokyo and Nagoya in 40 minutes is one of many construction projects brought to a halt as the government declares a state of emergency to combat the country's rise in coronavirus cases.

The developer of the 236 km magnetic-levitation line, Central Japan Railway, has suspended construction work in Tokyo and nearby Kanagawa Prefecture.

Regarding future action, "individual decisions will be made after verifying the intentions of contracting companies," a company representative said. The hyperfast bullet train connection is expected to debut in 2027.

Shimizu, a major Japanese contractor, said Monday it will discuss plans with clients to halt each of the company's nearly 500 projects in the seven affected areas. The contractor reports three infections at a construction site, including one fatality. 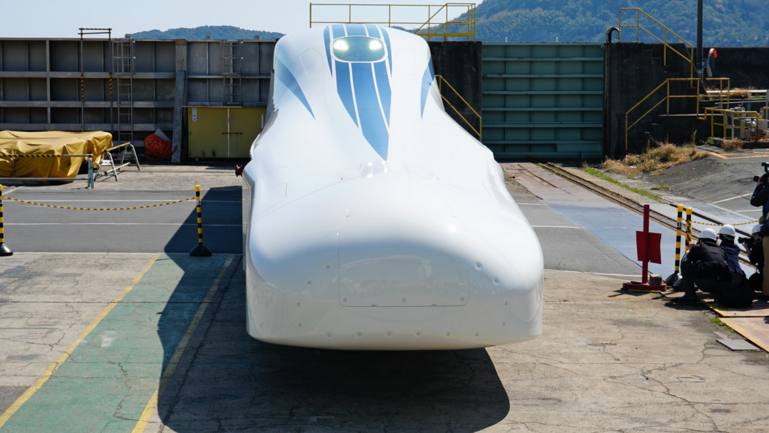 A maglev train under construction at a Hitachi plant in Japan's Yamaguchi Prefecture. (Photo by Annu Nishioka)

"We will halt construction as we reach agreements with the ordering parties," a Shimizu representative said.

The suspensions will last until at long as the emergency order is in effect, currently scheduled to end May 6. Projects will remain idle if the decree is extended. Shimizu's work includes the large-scale redevelopment project in Tokyo's Toranomon business district.

Nishimatsu Construction and Tokyu Construction are talking with clients about suspending project work in the emergency declaration regions through May 6. Nishimatsu apparently has finalized stoppages at several civil engineering and building projects.

Tokyu said it will hold further discussions, both internally and externally, if the emergency order is extended beyond May 6.

Whether these construction freezes cause a significant delay depends on how far a project has advanced. Projects at an early stage can recover more easily due to the extra days added as a cushion to the timeline.

Obayashi will keep construction projects active as a general rule, the company said Wednesday. Kajima and Taisei plan to continue building while working to prevent the spread of infections.

But just like at Shimizu, coronavirus patients are cropping up at other builders.

"I predict more companies will suspend construction," an executive at a major contractor said.