TOKYO -- Airlines are poised for a wave of consolidation amid a tough business environment exacerbated by the coronavirus pandemic, the head of one of Asia's biggest aicraft leasing companies told Nikkei Asian Review.

Peter Barrett, CEO of SMBC Aviation Capital, said there are early signs of recovery in air travel demand in Asia and predicted low-cost carriers will lead the industry's recovery.

Low-cost carriers have more ability to drive down costs than traditional airlines, he argued.

There are early signs of recovery in air travel demand in Asia and parts of Europe, Barrett said. Data from aviation analytics company Cirium also shows that the pace of year-on-year decline narrowed to 35% in late May from 80% in February for China, and to 65% in late May from 75% in April for Asia-Pacific.

"We are seeing some very small green shoots, I would say, in markets like Korea, Malaysia and Thailand and other markets in Europe," Barrett said. "What we are going to see over the next number of months is a slow, steady return of air travel. But it is going to take time." 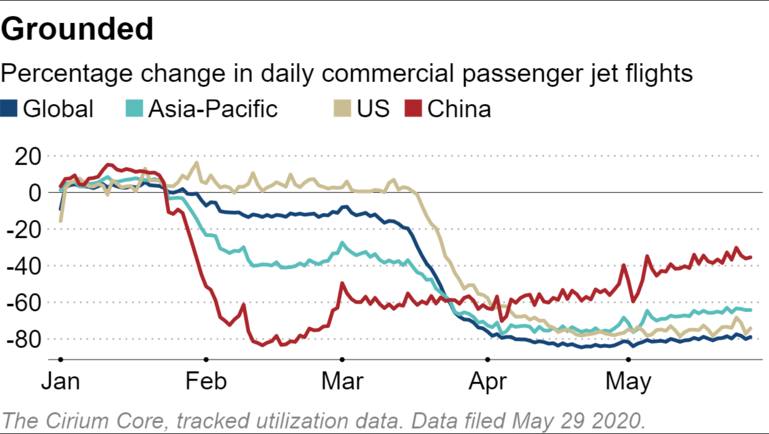 Aircraft leasing accounts for half of the world's commercial aircraft fleet, according to aviation research company CAPA. Leasing allows airlines to own an aircraft without putting up large amounts of capital in advance and has helped startups to expand their business and challenge the existing state-owned national flag carriers in emerging economies.

Barrett said his company would seek business opportunities in China despite uncertainty cast by tensions between Washington and Beijing. "I have been doing business in China for almost 30 years," he said. "I don't expect that to change. China will continue to be an important market."

He said his company's focus would be on managing the existing portfolio and providing liquidity to its customers. "In terms of leasing additional aircraft and increasing people's seats, I think that's a way off."

SMBC Aviation has been providing liquidity to airlines through sale and lease-back arrangements as they try to build up their financial positions and weather the downturn.

But airlines with a weaker credit profile may experience difficulty paying lease fees.

"Obviously, there are going to be some challenges. A number of our customers will have a difficult year. There is a risk of credit costs and impairments," he said.

Some airlines recently filed for bankruptcy protection, including Thai Airways International and Latam Airlines, both of which are customers of SMBC Aviation. Emerging Asia provided 32% of revenue in 2019, with another 33% acconted for by emerging markets in Latin America, Europe, the Middle East and Africa.

SMBC Aviation itself is racing to beef up its own financial buffer. The company had $12.7 billion in aircraft assets as of March 31, much of which is financed with debt.

The leasing company has an untapped credit line of more than $3 billion from its Japanese parent companies, which also own half of SMBC Aviation's debt.

SMBC Aviation does not offer earnings forecasts, but SMFG President and CEO Jun Ota has said that credit costs and impairments at the Irish subsidiary are estimated to be around $100 million for the current fiscal year, suggesting that SMBC Aviation is likely to be in for the first profit drop in six years, but will stay profitable for the 20th straight year.

Ota voiced confidence in the aviation business and said that the bank will continue to strengthen it.

SMBC Aviation reported on June 3 a pretax profit of $365 million for the year ended in March, up 5.8% from the previous year. Lease income, or revenue, totaled $1.2 billion, up from $1.1 billion.