TOKYO -- Japanese marine shipper Mitsui O.S.K. Lines has started to develop an automated navigation system for its ships that would cut down on accidents and allow the company to field a more efficient fleet.

Aboard a Mitsui tanker, a monitor in the control cabin displays a video of the vast oceanic expanse. Blue and yellow dots indicating other ships, some too small to see with the naked eye.

The monitor also displays shallow areas of the sea, assisting with piloting. This is part of Mitsui O.S.K.'s automated navigation system, nicknamed Focus, which employs augmented reality along with big data. When fully developed, the system will help sailors determine optimal routes and avoid collisions.

The "eyes" of Focus come in the form of cameras that determine the position of neighboring ships, as well as sensors that gauge the height of waves and weather patterns. They system is being rolled out in 28 vessels.

Algorithms geared toward avoiding collisions and mapping out routes are the "brains" of Focus. If a ship needs to change course, the monitor displays areas where collisions with other ships could potentially occur.

Mitsui O.S.K. has been engaging in joint research with the National Institute of Maritime, Port and Aviation Technology, and other partners.

The company plans to install data-collection equipment on 180 of its vessels by the end of the year, and eventually install the devices in the roughly 600 remaining ships owned by other parties. The devices will monitor conditions of engines and other major machinery, and relay the information via satellite to land-based diagnostic centers that will identify potential problems. 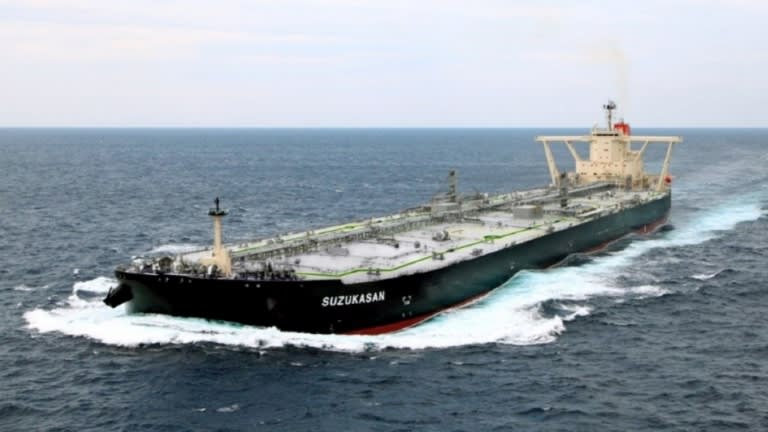 Data-collection devices installed on the ships will monitor conditions of engines and other major machinery. (Photo courtesy of Mitsui O.S.K.)

This setup resembles how connected factories work, but the development of connected ships face several barriers.

"At sea, there are waves that constantly create situations akin to earthquakes, so the data is not uniform and the hurdle for gauging breakdowns is high," said Satoshi Fujii, general manager of Mitsui O.S.K.'s smart shipping division.

Equipment breakdowns at sea are fairly common events. Depending on the severity, ships would have to make an emergency port stop. Detecting defects at an early stage will prevent delays in shipping schedules and curb repair costs.

Withe cargo traffic slumping amid the coronavirus, Mitsui O.S.K. expects to report its first pretax loss in eight years for the fiscal year ending March 2021. Despite the financial crunch, the company will continue to spend up to 1 billion yen ($9.2 million) a year on the Focus project.

"When considering megatrends such as the global economy and environmental problems, it is necessary to improve operational safety through the application of digital data," said President Junichiro Ikeda.

Mitsui O.S.K.'s ultimate goal is to realize high-speed communication using small satellites. Marine communications is said to be at least a decade behind its terrestrial counterpart. At present, there are few satellites that completely cover the sea. Data interchange with terrestrial servers is limited to one instance every minute.

"The bottleneck is the sea-level communication environment," said Ikeda. The shipper is attempting to break down that communication barrier.

Leading the project is e5 Lab, the group company responsible for developing electric tankers. The company is teaming up with partners with knowhow in launching satellites. With enough satellites in orbit, Mitsui O.S.K. can transition to its plan to share big data.

The goal is to attain communication speeds faster than terrestrial 4G networks. This way, video data can be transmitted, and there will be no time lag in communication with headquarters.

Advances are being made in remote marine navigation. Rolls Royce and another partner launched the world's first fully autonomous ferry in 2018, but the vessel only travels along the coastline where it has access to terrestrial signals. No ship has successfully been controlled remotely from a long distance.

The global market for automated navigation is expected to grow to $78.8 billion in 2025, according to British firm Credence Research, or more than 25 times the 2018 figure. About 2,000 accidents occur at sea each year, with 70% caused by human error.

Automated navigation would not lead to smaller crews because people must be on standby in case of emergencies. But remote navigation would be a different story since staff at the home office could be assigned to pilot ships.

"Onboard crew members could potentially shrink by half, and benefits are especially expected for domestic-focused ships, which is experiencing serious labor shortages," said an industry source.

High-speed communication on the high seas could lead to greater use of data collected by hundreds of ships. Mitsui O.S.K. could analyze volumes of real-time weather and ocean data to plot routes that optimize safety and fuel efficiency.

Japanese marine shipping companies fall behind European and Chinese rivals in terms ship and fleet sizes. By leveraging big data, the Japanese contingent can compete in areas outside of scale.